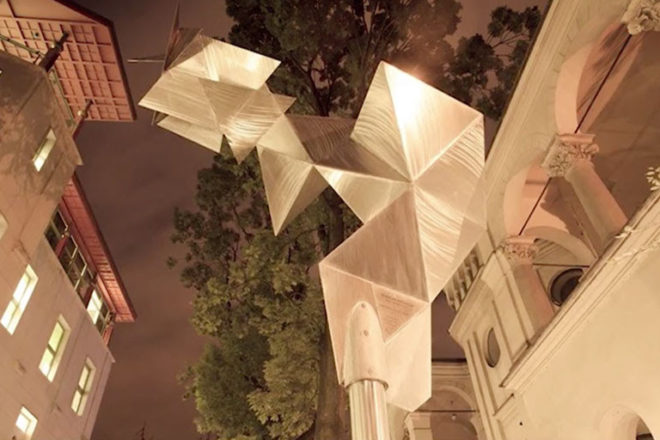 The 17-foot “Shofar Krakow,” by Richard Edelman, is a centerpiece at a community center in the old Jewish quarter of Krakow, Poland. Submitted.

People can travel to countries such as Israel and Poland to see the work of Milwaukee-based sculptor Richard Edelman. Or, they can visit Egg Harbor, where two of his sculptures are installed: “Blue Sail” at the marina, and “Three Dancers” at the Peg Egan Performing Arts Center.

A Milwaukee gallery shared Edelman’s work with Margaret Lockwood and Allin Walker, formerly of Woodwalk Gallery in Egg Harbor, forging the connection between the renowned sculptor and Egg Harbor. Lockwood, who was also active with public arts in Egg Harbor, was then instrumental in acquiring “Blue Sail” for the village’s marina. Edelman and his wife, Nina, visited the village often, and he couldn’t wait to get involved again.

“That resulted in our gift of ‘Three Dancers,’” he said. “A 12-foot version of ‘Little Dancer, Aged Fourteen’ is to follow in the spring at the new trailhead leading from town to the new beach development area.”

For his body of work, Edelman has been awarded the Frank L. Weil Award for the Advancement of Jewish Culture in North America, sharing that honor with the likes of Leonard Bernstein, Isaac Bashevis Singer and Elie Wiesel.

His success is particularly impressive because Edelman, now 75, didn’t start sculpting until he was 58.

He graduated from MIT in 1970 with the unusual dual major of engineering and philosophy, and for several years, he was involved in the underground-press movement and anti-war activities around Boston and Cambridge, Massachusetts.

“When the war in Vietnam ended,” Edelman said, “I pulled up stakes with Hovey Street Press in Cambridge, which I had founded and operated for six or seven years. Married and needing a job, I went to work in Milwaukee for the scrapyard in which my father was a minority partner.”

But scrapyard work didn’t last long, as Edelman left to work in Chicago for National Material Trading, a widely based trading company and brokerage. He rose to vice president for international trade before leaving with two partners to form Essex Trading Company in 1990, and he served as Essex’s president until his 2010 retirement.

Edelman had an artistic bent that he’d maintained throughout his career, always working with his hands and gravitating to creative and artistic circles.

“But I had this love of metals and sculpture,” he said, “and even before I settled on that, my wife, Nina, encouraged me to go to night school in Evanston and learn about welding. One night of that, and I was on my way.”

Edelman’s focus during those Evanston adult-education classes and then at the Milwaukee Institute of Art and Design – all while still running his own company – focused on the how-to of welding and blacksmithing.

He has a workshop outside his home office, gesturing to the left while talking on a Zoom call.

For much of his work, Edelman begins with a model, stores it in his computer and sends the file to a fabricator to make the parts – or to make the entire sculpture if it’s large.

For “Three Dancers” in Egg Harbor, he drew the parts and had them cut to spec for a model. After he assembled the model, he sent it to a manufacturer to produce in the larger size. He sends projects that are taller than 15 feet out for final assembly.

“I will order the parts cut,” Edelman said. “A lot of contemporary sculpture is done that way – kind of cut and paste. You cut steel that is flat and then weld the pieces together. You might also bend or fold it, but it is a manufacturing process, whether I do it here or have it done somewhere else.”

Edelman also works with a lost wax process, using plaster or clay supported by a steel armature to create a mold, then using bronze or stainless steel for the pieces that are welded together.

He’s never taken art courses, but being an engineer, he said he could look at something and know how it was put together. Edelman also has all the books by great sculptors and considers David Smith a teacher.

“He was a welder in a Studebaker factory in South Bend, Indiana,” he said, “and got involved working with a lot of found stuff, making assemblages and then going on to ordering cut steel.”

Edelman is currently working on a university commission that’s different from his previous work. He said his advantage over younger artists is that they – “unless they are absolute geniuses, like Picasso” – spend their time developing a signature style that ends up entrapping them.

“I go from thing to thing; I don’t have to brand myself,” he said. “I can more or less do what I want. I can do things that I find interesting.”

Edelman creates models for his ideas and then floats those models out to prospects.

“I probably have three, four or five models out there,” he said, “and sometimes, somewhere, someone finds one interesting.”

A few years ago, Edelman formed a foundation to donate a lot of his work, as either a partial or complete gift. He contributed the work, installation and ongoing maintenance of Egg Harbor’s “Three Dancers,” for example, for as long as he’s around.

“Every project has a different balance of financing and contribution structure,” he said. “I no longer compete for public commissions because of the high cost of modeling, traveling, drawing and presenting, while submissions can be [made] in the many dozens. I need to know going in that the project is mine if my model is good, however the project is financed.”