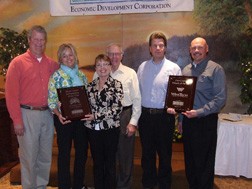 The Seaquist family of Dale and Kristin Seaquist and Jim and Robin Seaquist earned the Door County Economic Development Corporation’s (DCEDC) Entrepreneur of the Year award, while Wiretech was named the Industry of the Year at DCEDC’s annual meeting May 25.

The Seaquists own Seaquist Orchards, which has roots dating to the 1860s and grosses over $5 million annually in farming, food production and retail. Seaquist Orchards produces over 50 percent of Wisconsin’s cherry crop and employs 100 people in peak harvest season and 10 year round.

“It is our pleasure to recognize the Seaquist family with the Entrepreneur of the Year award,” said DCEDC Executive Director Bill Chaudoir. “For multiple generations they have built a strong and complementary collection of business entities. Their contributions to our economy and our community are almost incalculable. We wish them nothing but continued success.”

WireTech Fabricators earned Industry of the Year honors for making a substantial impact on the community. For over 65 years, WireTech has built a reputation for producing high quality, low cost fabrications to industries. In 2010 the company moved into a state-of-the-art facility in the Sturgeon Bay Industrial Park.

“We are thrilled to recognize WireTech Fabricators as our industry of the year, especially on the heels of their long-awaited relocation to the Industrial Park. They have been an important part of our local economy for many years and we can only hope that will continue for many years to come,” said DCEDC Executive Director Bill Chaudoir.