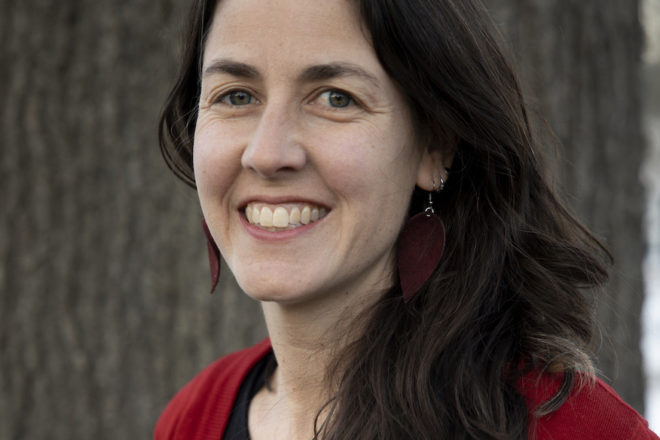 Coburn Dukehart’s work for the Wisconsin Center for Investigative Journalism takes her to chicken runs and the front line of protests, up close with young subjects, and up in the air to catch the scope of voting lines in April 2020.

You’ve likely seen Tad Dukehart’s name in the pages of the Peninsula Pulse, most notably for his photos of fire calls and county events. But before he retired to Ephraim and began capturing the county’s history, he spent 40 years recording history in Baltimore and Washington, D.C. — from Martin Luther King Jr.’s “I Have a Dream Speech,” to Spiro Agnew’s resignation address, to the Million Man March. He bore witness to critical moments in our nation’s history and sometimes took along his daughter, Coburn Dukehart, who grew up with an interest in capturing and sharing history as well.

Coburn’s career has taken her from editing photo galleries for WashingtonPost.com, to working as the photo and multimedia editor at National Public Radio, to becoming a senior editor at National Geographic. She’s now the digital and multimedia director for the Madison-based Wisconsin Center for Journalism, where she edits photos, manages the website and goes out into the field to capture the news.

Together, they will sift through photography submissions to find an “elevated moment,” as Coburn puts it, as co-judges for the Hal Prize, the annual literature and photography contest of the Peninsula Pulse.

We met via Zoom to chat about their careers, what they consider to be a good photograph and why introverts can often make the best photographers. The interview has been edited for space and clarity.

Sally Collins (SC): Tad, you witnessed some pretty amazing history during your career in Washington. Can you tell me a little bit more about that?

Tad Dukehart (TD): I was quite young when I got a weekend photographer’s job at a television station in Baltimore. We shot black-and-white newsreels using Second World War surplus cameras. I covered a lot of the civil-rights era there. I filmed the March on Washington, where Martin Luther King Jr. made his “I Have a Dream Speech,” and it was years before I realized what I had seen.

After the Million Man March in 1995 in Washington, D.C., where a million African American men showed up to the Capitol to show what they can do for the country, I was at the base of the Capitol, and I looked and reflected and said, “You know what? I really have come a long way. From covering Martin Luther King Jr.’s speech at the other end of the mall to today, with a million men showing up.”

SC: Were you taking photographs during this time, or were you doing newsreel?

TD: I did newsreel. I didn’t really pick up a still camera until we retired to Ephraim. My thing is, I take pictures of people. My greatest pleasure is to support nonprofits with pictures. I started with the Ephraim Fire Department, taking pictures for them, and then it morphed into taking pictures for Sister Bay and Baileys Harbor and any type of major event up here.

They might not feel very important at the time, but what’s happening is pictures from seven, eight, nine years ago become more significant.

SC: Coburn, when did you first pick up a camera?

Coburn Dukehart (CD): It wasn’t until after I graduated from college [Coburn earned a journalism degree at UW-Madison and a master’s in photojournalism at Missouri]. Actually, Tad had an old black-and-white film camera, a Nikon. I took some darkroom classes at a community art center near D.C.; then Tad introduced me to a newspaper photographer, and she took me to work with her a couple times and let me shadow her.

SC: What drew you to photojournalism?

CD: I don’t really like being bored. Most people who get into photojournalism like the variety, and like talking to different people, and learning new things all the time, and getting out into the world. I see my job and journalism as telling stories as opposed to taking pictures.

SC: What are you looking for in a good photograph?

CD: My aesthetics are a much more human-centered, moment-centered approach to visuals: looking for the story and the feeling a photo might create, as opposed to something beautiful for the sake of being beautiful.

TD: I think in Door County, people tend to submit pictures of sunsets and Cave Point over and over and over again. Yeah, they are beautiful, but I don’t see the variety.

Above: Photos by Tad Dukehart

CD: It’s easy to take a cliché picture or go where everyone else has gone. But if you go somewhere different or change your perspective — you get down low, you stand up high — I think you will surprise people by showing them something they might not be able to see by themselves.

SC: I know quite a few photographers who are quite shy, but something happens when they get behind the camera. Have you noticed that as well?

CD: That’s true for me. Many photojournalists are very shy, quiet people, and I think those are the types of people who tend to get really meaningful photos because they don’t make it about themselves and can disappear into the background.

Tad has an advantage taking pictures of people because of his career. He’s so comfortable interacting with people; he’s a people person. Beginning photographers tend to stay away from people, and it’s hard to take a meaningful picture of people if you don’t get close to them. Introduce yourself and say, “I noticed you’re doing this thing. Can I take your photo?” Most people will say yes.

SC: What is your advice for those who are considering submitting or taking pictures?

CD: Do some self-editing. Be willing to show the photos to somebody else before submitting. I think there is a common misperception when people take a picture that if they worked really hard to take it, it must be really good.

And there are three elements that might make a great photo. One is light. The second is composition, so it should be aesthetically pleasing, and then moment: Is something happening in the frame that is meaningful? Any winning photo is going to have all three of those elements.

Submit to the Hal Prize

The Hal Prize, the annual literature and photography prize of the Peninsula Pulse and Write On, Door County, has a new deadline, new format and some exciting new reasons to submit in 2021.

This year’s winners will be published both in the Peninsula Pulse and in the new 8142 Review, a collection of stories, photography and poetry to be released in November. Submissions are open through Sept. 15 in four categories: fiction, nonfiction, poetry and photography.

Prizes include cash prizes of $250, $100 and $50 for the top three entries in each category and a Hal Prize mug from Clay Bay Pottery for first place. Learn more and meet this year’s judges online.