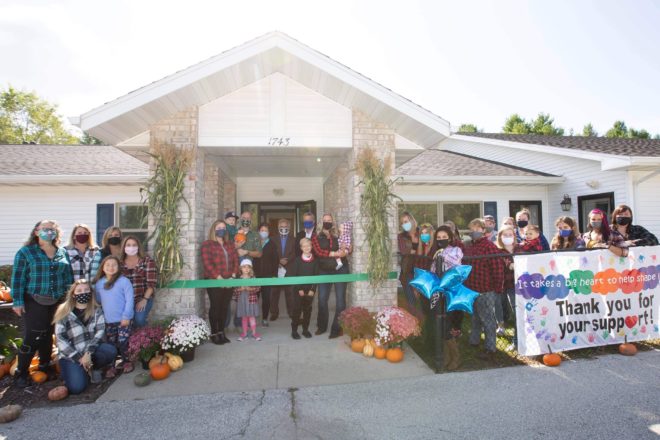 When the Door County YMCA announced the closure of the Barker Child Development Center in Sturgeon Bay in July 2020, Executive Director Tom Beerntsen said there were many factors, but it boiled down to one primary cause.

The business model for child care is broken.

This didn’t happen overnight, and it isn’t unique to Door County. A national child care crisis was inevitable as real incomes stagnated and housing and health care costs soared throughout the last half century, making dual incomes a necessity for most Americans just to stay afloat.

In the child development world, it has created what leaders call the child care trilemma: the challenge to provide quality, affordable and available child care.

“You try to meet any one of those goals, and it causes problems for the other two,” said Karen Corekin-DeLaMer, community relations coordinator for the Northern Door Children’s Center (NDCC), during a town hall meeting hosted by United Way in February. Initially identified in the 1970s, the trilemma has vexed policy-makers and advocates ever since.

All parents want quality child care, which generally means a low child-to-teacher ratio; clean, safe and well-equipped facilities; and well-trained teachers. That costs a lot of money – something many parents don’t have. The result is that child care becomes an entry-level field in which people cycle out as soon as a better job with more pay and benefits is available. Though child care pays better in Door County, child care workers earn minimum wage in many parts of the country.

“If you want to build a workforce, you want a stable work week, a retirement plan, paid holidays, sick time off, paid vacation, health insurance and a living wage,” said NDCC director Cindy Trinkner-Peot. For some American workers, those perks are standard. In the child care field, getting any of them is rare.

During the Great Recession of 2008, NDCC faced a sobering decision: cut costs or close. To keep the doors open, staff members gave up their health insurance.

“It was hard,” Trinkner-Peot said. “It took 10 years for wages to catch up. What happened is the employees shoulder the cost of keeping care going. But we don’t regret keeping the doors open.”

The Affordable Care Act (ACA) helped. Because wages for child care workers are so low – even Corekin-DeLaMer and Trinkner-Peot supplement their income by cleaning rental homes – most of the staff qualified for low-cost health care plans through the ACA.

Free-market principles would suggest that child care centers should simply charge more for their services, but for most parents, there is not more money to pay for it.

That’s where the affordability problem comes into play. Real wages in the United States have barely increased since the Jimmy Carter administration. According to the Economic Policy Institute, the median hourly wage for all American workers adjusted for inflation has risen just $2.54 since 1979.

In Door County, the median household income is $61,560. A family paying full freight for child care would spend about $11,000 per year for full-time care.

The Wisconsin Shares program provides funds to help families making up to 185% of the federal poverty level to pay for child care. Local providers say many of their families make just a little too much to qualify for the program, but not enough to afford care on their own.

The federal stimulus package that was signed into law in March is seen by some as a pilot program for a transformative way to think about child care in America. The $1.9 trillion package included a provision to provide monthly checks of up to $300 for families with children younger than six years old. The payments could help millions of parents to afford child care and stay in the workforce, or to cut back on work and stay home to care for their own children.

One other way that states and communities have addressed the child care shortage – and local school-funding issues – is by offering four-year-old kindergarten. For many families, this is a huge financial boost, eliminating a year of child care costs.

But it presents a problem for child care providers who make most of their revenue from older children, for whom child-to-staff ratios jump from 4-to-1 to 13-to-1. When the Sturgeon Bay School District began offering four-year-old kindergarten, Beerntsen said that made the Barker Center a losing proposition. Expanding to three-year-old kindergarten would strain the system even further.

Employers are feeling the shortage as well. Michelle Waldinger, director of human resources at Marine Travelift, said employee recruitment suffers because of the lack of child care options.

“I have no problem increasing my wages, increasing my relocation bonus, but I can’t guarantee child care,” she said. “That’s a problem.”

Though the company prides itself on bringing young families to Door County, she said it has encouraged some families to locate in or near Green Bay to be closer to child care options. That takes kids out of local schools and money out of the local economy.

“Two-income households are asking if it’s worth it to keep working just to pay for child care, so that makes it more of a workforce problem,” Jenkins said. “You risk losing families that decide to move where child care is available.”

Amy Kohnle agreed. She’s director of United Way of Door County, which developed a task force to address child care issues before the situation with the Barker Center came to a head.

“My big fear is that we’re going to lose the young families that are here,” Kohnle said, “and are we going to be able to attract new ones without child care options?”

When the YMCA announced the closure of the Barker Center, leaders at Door County Medical Center knew it would be a problem. Their 700 employees include many young parents, and CEO Brian Stephens said he knew they stood to lose staff who would have to stay home to care for their children. But the hospital did not want to get into the child care business.

A local conversation about the long-simmering issue was already underway when the YMCA closed the Barker Center. Before the COVID-19 pandemic upended every aspect of American life, United Way of Door County had recognized the child care dilemma as its major focus of 2020.

Christina Studebaker, community impact coordinator for United way, said the staff talks often about the importance of child care to the community and the economy, and ultimately decided that United Way had to do something about it. It hosted twice-monthly forums during the fall and winter of 2020-21 to hear from parents, business owners, recruiters and child care providers about the state of play in Door County.

“My biggest takeaway – the thing that is overlooked – is the workforce,” Studebaker said. “You can’t enroll more children unless you have the skilled child care workforce. But with wages so low [according to the U.S. Bureau of Labor Statistics, the median hourly wage of a child care worker in the U.S. is just $10.72], it’s really hard for someone to enter the field and stay in the field. The business model has big challenges, yet nobody has come up with a solution.”

Studebaker said to her, it’s clear that public subsidies will have to become a larger part of the solution.

“We do this with other things and don’t think twice,” she said. “There’s room for communities – business owners, local government, philanthropy – to get more skin in the game, but it’s not the whole solution. It’s not the sustainable solution.”

When the Barker Center closed, it left the families of nearly 80 children in the lurch. But not everyone was willing to throw their hands in the air and walk away from the problem just because the existing model didn’t work.

Stephens felt he needed to help his staff. The Barker’s former director, Alexis Fuller; and her sister, Bridget Starr, thought there might be a new way forward. They worked with the City of Sturgeon Bay, Nicolet Bank, United Way, and the Door County Economic Development Corporation to chart a new path by forming a nonprofit to reopen as the Door County Child Development Center (DCCDC) in September.

Door County Medical Center agreed to lease the building from the YMCA and take care of its maintenance. The hospital then subleased the building to DCCDC.

“Alexis has a really sound business plan and a commitment to pay staff what they deserve. That was a key component,” Stephens said at the time.

Separating the center from the YMCA doesn’t solve all of the center’s financial hurdles, but Fuller said there are advantages that will come with being an organization focused solely on child care and not the wide variety of services the YMCA offers.

As a smaller entity, the center does not have to provide health insurance, which the YMCA had to offer as a business with more than 50 employees. Fuller said she aims to make up for that with higher wages and other less-costly benefits for the 23 to 25 staff members she expects to employ.

Six months later, she said the center is thriving, helped in part by the community’s realization that child care hangs by a thread.

“The closure and the conversation around that brought such great awareness to community members,” she said. “I can be transparent and upfront about what we need. We’re trying to build something that, from all aspects, will be the ideal way to do child care. If families feel they’re supported, and staff feels they’re supported, that builds such a great program and builds rapport with the community. We came into it knowing that child care wasn’t a successful business. So instead of people saying, ‘Well, that will never happen,’ they’re saying, ‘How can we help?’”

The problem is far from solved. Even before the Barker Center closed, parents throughout the county worried not only about whether they could afford child care, but also whether they could get their child into a program. Many spent months on waiting lists, patched together care with a hodgepodge of family or friends, or commuted more than an hour each day to a center with an opening.

Then there’s the need for care outside the 9 am – 5 pm, Monday-Friday schedule. In a community where tourism drives the economy, many parents make their money during evenings and on weekends.

“We need to develop some kind of part-time care,” Studebaker said. “It’s hard to handle it on a one-off basis. And even traditional office jobs are becoming more flexible now. It probably will require another niche provider. It probably can’t be the same people doing it all.”

A year into the United Way’s community conversation about child care, Studebaker said one of her biggest takeaways is just how much she didn’t know about the issue when she started down this path.

“I’m a little embarrassed that it’s taken me this long for the light bulb to go on on this issue,” she said. “A lot of times I think, what if you started fresh, with no preconceived notions about how it’s done, what would you do for child care? Would it look anything like what we have?”