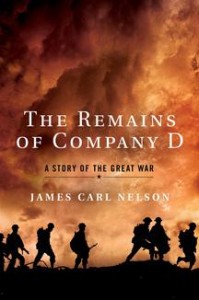 Nelson will be the featured speaker for the Friends of Door County Libraries’ Fall Book & Author event on October 1 and 2. He will be speaking at the Miller Art Museum at 7 pm on Friday, October 1 and at the Sister Bay Liberty Grove Firehouse on Saturday, October 2 at 10 am. I had a chance to email back and forth with Nelson before he headed to Door County to discuss The Remains of Company D: A story of the Great War.

Mindi Vanderhoof (MV): Where did your interest in military history come from?

James Carl Nelson (JN): I have been interested in military history since I was a small child. When I was about seven years old I “wrote” and illustrated a couple of books, one about the Civil War and one about the Revolutionary War. Of course, I just ripped off the “How and Why” books I had lying around. Around the same time I was making plans to attend the United States Military Academy at West Point, but the plans changed with the times. In any event, as to where my interest in military history actually came from, I don’t know; perhaps movies like Bataan and They Died with Their Boots On. I loved the drama and pageantry and glory of the battle scenes.

MV: How did you go about researching for The Remains of Company D? Were you able to get any firsthand accounts from Company D members?

JN: The seed of the book was in the small story my Swedish-immigrant grandfather John Nelson told about being shot through the abdomen by a German machine-gunner in 1918. He laid out on the field overnight, and was picked up by what he said were a couple of “Algerians” – his division, the US First, was in line next to a Moroccan division, part of which consisted of the famed French Foreign Legion – and carried to a medical unit in the back lines, then sent to Paris for surgery. The story always captivated me. Over the years, a few more details emerged regarding it – that it had happened near the French town of Soissons; that it had occurred on July 19, 1918; and that for every July 19 since marrying in 1920 my grandfather and grandmother took the day off to be by themselves. Some years after he died, in 1993 at the age of 101, I started really looking into the story, and obtained an Aug. 1, 1918 muster roll that listed him and scores of others from his unit – Company D, 28th Infantry Regiment, US First Division – as “Missing since recent operations.” I had never heard him speak of any of the men on the roll, and I just decided at that point to research these men and see if I could tell his story as told by the men in his company, with which he’d only been with a month before his war ended at Soissons. I was indeed able to get first-hand accounts from some 30 or so men who served in Company D – mostly letters home. They had all passed away by the time I started researching the book in earnest in 2003.

Private First Class John Nelson served with Company D, 28th Infantry Regiment, US 1st Division. Nelson was severely wounded at Soissons on July 19, 1918. He lived most of his life in Chicago after emigrating from Sweden in 1911 and moved to Sister Bay in mid-1980. Nelson died at the age of 101 at the VA Hospital in Sturgeon Bay on December 8, 1993.

MV: How much did your experience as a journalist help you in researching for the book and telling the story?

JN: My experience as a journalist was invaluable in putting the book together. I’ve been writing every day for more than 25 years, so the story-telling is just second nature to me. And I had to be persistent, and know the right questions to ask while researching the book. I was also able to parlay some hunches into some big scores regarding source material, which is probably a reflection of my journalistic background.

MV: What story did you set out to tell in The Remains of Company D?

JN: My original goal was to tell the story of what had happened to John Nelson at Soissons – an account of a single battle. He very rarely talked about it, and we had very little understanding of the circumstances surrounding his famous little war story. But as I progressed in locating material from and about these obscure soldiers, the story became larger – it became the story of Company D, from inception in the summer of 1917 to the end of the war in November, 1918, and carrying forward with some of the characters into their post-war lives. In a nutshell, I wanted to understand my grandfather’s experience in the war, which he had been reluctant or unable to vocalize, and to do that I had to gather the accounts of others with whom he served.

MV: With the multitude of military historical books out there, why do you think the stories of the doughboys of Company D have never been told?

JN: I think World War II has overshadowed the story of the doughboys in general. There are numerous books about the American effort in WW I, but most are sweeping overviews or are about the leaders – John Pershing, etc. My book is the first book about a single unit in the war since William March’s semi-fictional Company K, published in 1931. The Americans were only in the war for about a year, and only in combat for six months, compared to the Europeans, who had been fighting for almost four years before Company D and the 28th Infantry made the first attack at Cantigny. And after the war, America moved on quickly. I think there’s a resurgence now in interest in the war. Since the book came out in October, I have been contacted by many people who want to learn more about their grandfather’s or great-uncle’s or great-grandfather’s experience in the war, and want to know where to begin. With the 100th anniversary of the Great War’s beginning coming up in 2014, I think that interest will only increase.

MV: What do you hope people take away from The Remains of Company D? Is it strictly historical or is there something to be learned?

MV: What kind of response have you received about the book? Is there a difference in how a history buff responds compared to someone reading it for other reasons?

JN: The most enthusiastic response has been from men who have served in the military. I’ve had quite a few readers go out of their way to look me up and call me or write me to tell me how surprised they were to find that my portrayal of the experiences of these doughboys mirrored their own military experiences. I think overall – from casual readers to more serious history buffs – the book has been appreciated for presenting a very human look at war – not just WW I, but any war.

MV: Did you learn anything about your grandfather through writing this book?

JN: I learned quite a bit. I set out to try to recreate his experience in the war, and through research was able to put him in the trenches around Cantigny in late June, 1918 with those very same men who had famously taken the village just weeks before, and then I was able to visualize him as he raced across the Paris-Soissons Road that July 19, and get a sense of what that must have been like. I actually visited that French battlefield in 2008, just to get a lay of the land. I of course gained a new appreciation for the bravery it took to be part of that assault, what it was like to race ahead into the maw of dozens if not hundreds of machine guns, and I got a better idea of how the war stayed with him through his long life. He was very proud of his service, and rightly so.

MV: Do you see any other books in your future?

JN: I am working on a book called Five Lieutenants, which follows the fates of five young Harvard-educated officers who served in the 1st Division in WW I. It’s to be published by St. Martin’s Press in the fall of 2012.

Nelson is by profession a senior reporter for American Media and a former staff writer for The Miami Herald. Although Nelson and his family live in Eden Prairie, Minnesota, his late grandfather, John Nelson, the reason for and inspiration behind The Remains of Company D: A Story of the Great War, lived in Sister Bay during the last years of his life, and his mother, June Nelson and brother John Nelson currently reside in Sister Bay.