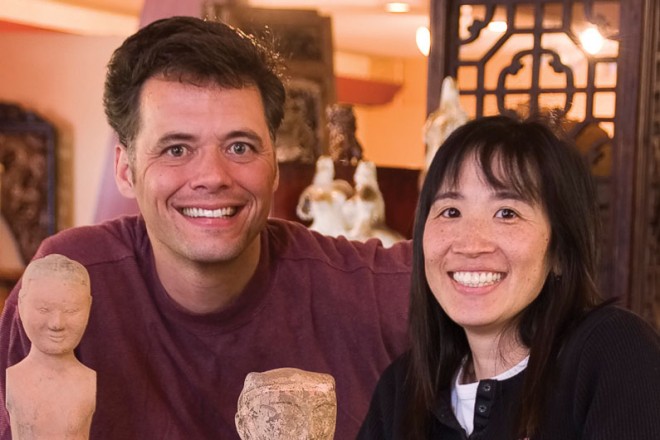 The Linden family has returned from another winter spent in China, bringing with them the type of unusual treasures that has made Linden Gallery of Ellison Bay nationally known as a purveyor of Asian art and antiques. Brian Linden estimates that he (and his wife, Jeanee, and their two young sons, Shane and Bryce) spent over twenty nights sleeping on trains, and that over three months of their five-month long stay were consumed with active – and much of the time, arduous – traveling. “In China,” Linden says, “which is approximately the same size as the states, many areas are extremely rural, and comforts are simply not available.”

The Lindens’ first stop was Jingdezhen (which became Door County’s “sister city” in a cultural alliance formed during the summer of 2004). Arriving about a week behind Door County Board Supervisor Charlie Most, Linden says efforts to bring ambassadors from Jingdezhen to the Door peninsula are still underway. Of his time in “the porcelain capital of the world,” Linden says, “I’m so proud to be bridging the ocean and participating in a true grassroots diplomacy, and am making new friends on each trip.”

In Jingdezhen, Linden spent a period of time being escorted by Xie, an expert porcelain forger who revealed some of the techniques he uses to deceive even the most savvy porcelain dealers into believing that they are purchasing authentic pieces of antique art. He later followed Xie to pay a visit to Old Lady Zhou, a former porcelain artist herself who, at over 80 years old, remained in a damp and dusty apartment decorated by a series of brilliant fencai porcelain panels in their original hardwood frames.

Linden marvels, “These panels were fashioned by one of Jingdezhen’s leading pre-revolutionary artists, and similar pieces have sold for over $100,000 a piece! This woman housed some of the most sought after porcelain on the world market, yet she continued to inhabit a leaking, cold structure, and tolerate limited electricity and no running water with her husband, children and grandchildren. She could sell the panels and live in luxury, but she found such joy in being able to appreciate these works of art in her old age, and refused to part with them until her grandchildren needed the money to pursue their educations.”

During their travels, the Lindens acquired a large number of items that would fall into the category of ‘antiquities’ (dating prior to the year 1200, or the time of Ghengis Khan). Linden explains, “Because there was so much destruction during this period, much of what is currently being uncovered are actually funerary vessels from the Han and Tang Dynasties. Since it was believed that the person who had died would need similar things in the afterlife, we are seeing beautifully preserved jars which were originally intended to hold grain or currency (at that time, conch shells) to supply the deceased with everything they would need as they entered the next world.” Keeping close tabs on current Asian archaeological digs, as well as economic trends, Linden predicts that the increasing prices for Chinese antiquities being paid by collectors bodes well for investors.

And, as investors learn more about the value of Asian art, the Lindens are looking into making an investment of their own. The family is considering purchasing a home in the city of Dali, in Yunnan province (the unique region is home to about 25 different tribal groups, and is recognized as “Shangri-La” by those who believe James Hilton wrote of this “fictional” locale in his 1933 book, Lost Horizons). “Jeanee and I hope to create our own Shangri-La,” Linden said recently, “and invite family, artists and clients to experience this beautiful part of the world.”