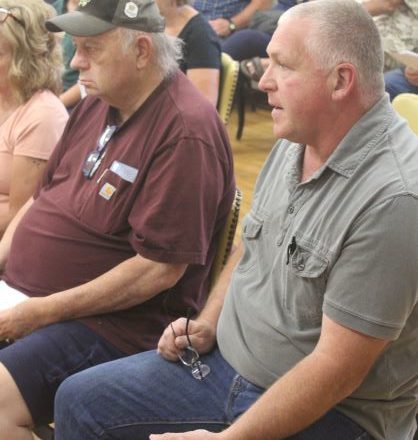 John Goetz (right) speaks during Monday’s Gardner Plan Commission meeting about his proposal to operate an RV park in the town. Photo by Kevin Boneske.

A proposal to locate a seasonal RV park in the 3400 block of County CC, where a mobile-home park used to be located, was unanimously recommended for denial Monday by the Gardner Plan Commission.

Neighbors of the proposed Goetz RV Park were among those filling the Gardner Town Hall to voice their opposition to the project, which would be a division of Goetz’s Resort.

Prior to the commission meeting, neighbors of the property were sent the plans that the town received from the Goetz family. The site has electric, sewer and water service with 18 slabs; was approved for up to 22 units by the County of Door; and includes an on-site sewage system for all of the units, according to the submitted project plans.

To convert the site for RV use, the proposal calls for widening the driveways to a minimum of 35 feet to accommodate long RVs, planting a buffer strip of trees between the RV units and County CC, upgrading the water hookups to be able to connect with RVs, and changing the electric system to accept RV plug-ins.

John Goetz appeared at the meeting to speak on behalf of the RV park with Mark Stevenson, who said he would be helping Goetz with the project.

Goetz – who acknowledged past problems with the mobile-home park, where Door County Sheriff’s deputies responded to complaints on multiple occasions before it closed – said the RV park would be “a lot different than what the trailer park was,” with “different type of people coming in.”

“I’m going to make it better,” he said. “I won’t let it get the way the trailer park was. I won’t make it anywhere near that.”

Commission members, as well as others attending the meeting, raised concerns about the proposed RV park, such as how the property would be managed with site rentals by the day, week, month and season, which would run April 15 – Oct. 15.

Fal Wing, who lives near the property on County CC, said nothing presented at the meeting about the proposed RV park is “anything akin to a business plan.”

“I have to say in all honesty that the kind of quality-of-life experience out in Little Sturgeon that was brought about by the mobile-home park that the Goetz family ran was akin to devaluing the property and making my lifestyle miserable at times,” Wing said. “The sheriff’s deputy squad car was a regular passerby, and since that mobile-home park has been removed, I don’t see the sheriff’s [department] too much anymore. And I don’t have a whole lot of reassurance that just because [Goetz] says it’s not going to be like that, that it’s truly not going to be like that. I have rather just the fear of the opposite.”

Goetz said in response that RV parks and trailer parks draw different types of people, so he didn’t anticipate problems. But Plan Commission Chair Mark Lentz said the type of park is not the problem.

“The mobile-home park that was there [along County CC] was mismanaged by the Goetz family, pure and simple,” he said.

Lentz said what the Goetz family provided to the commission didn’t include what the town requested when it was first contacted two years ago about the proposed RV park.

“This looked to me like a honey-do list of things that you folks needed to do to get the RV park ready,” he said.

Lentz said the list of park rules and regulations that Goetz provided was a “good start,” but what the commission requested wasn’t included.

“We want to hear what you’re going to do,” he said. “What is in the business plan? I’m absolutely disgusted that this came back to us.”

The commission’s recommendation to deny the RV-park project is being forwarded to the Gardner Town Board, which will make a final decision on the proposal during its Aug. 10 meeting.