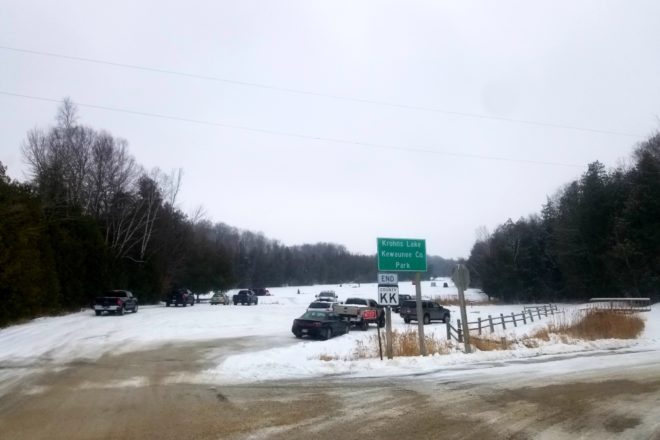 Door and Kewaunee County lakes have been attracting walk-on attention from those seeking panfish and other species. Clark and Kangaroo offer bonus pike and walleye, and Krohn’s near Algoma has stocked trout. All offer largemouth bass.

On the bay, a hard coat of ice has formed at the traditional early spots such as lower Little Sturgeon, Sawyer Harbor, the Sturgeon Bay canal and Dyckesville. As always, if you do choose to go, use an ice chisel as you slowly move away from shore.

Temperatures dropped into the single digits at midweek, but a weekend warmup is expected to last for the rest of the month. Highs in the mid-30s and lows in the mid-20s-to-30 range likely won’t hurt, but don’t expect to be able to safely access many areas until sometime in January.

To check on the latest ice and fishing updates, stop by Howie’s Tackle in Sturgeon Bay or Stevenson Pier Citgo in Little Sturgeon.

Todd Kalish, DNR Fisheries’ deputy director, said the state’s new three-year salmon and trout stocking plan is a diverse one with something for everyone, whether you fish from a boat or the shore.

“It’s not just increased stocking,” Kalish said last week. “We’re looking at enhanced data collection, marketing and even habitat restoration in some of the tributaries.”

In addition to two federal efforts that measure alewife abundance and estimate the number of age classes in the open water, the DNR will begin conducting nearshore alewife surveys during the spring spawn, Kalish said.

“We’ve listened, and we’re going to incorporate that,” he said.

Select tributaries up and down the coastline will be targeted for stream enhancements such as fish-passage opportunities and wing dams to provide faster water and the clean gravel [that] salmon and trout need for the best shot at natural reproduction.

For the first time in a decade, brook trout will be stocked in the system: the St. Croix River strain in 2020, and a special coaster brook trout strain beginning in 2021. Kalish hopes the DNR can stock about 50,000 of the colorful brookies annually.

Tom Kleiman of Accurate Marine, Tackle & Storage in Kewaunee is president of the Wisconsin Lakeshore Business Association, a group that lobbied hard for increased stockings of salmon and most trout species.

“Anglers want to see a shift away from the fed’s ridiculously high stocking numbers of lake trout,” Kleiman said. “We’re really thankful that the state is committed to providing what the majority of fishermen want: more salmon, steelhead, brown trout and brook trout.”

After a brief return to camo and an opportunity for bow and crossbow bucks for those with open tags, it’s antlerless-only for all whitetail hunters Dec. 24 – Jan. 1 during a special nine-day firearm deer “holiday” hunt. All hunters, except those participating in the late goose hunt, must follow blaze orange or blaze pink clothing rules.

Through Dec. 9, more than 6,000 whitetails have been harvested in all seasons on the Kewaunee/Door peninsula, down more than 1,300 from a similar point last year.

All of the losses have been from the nine-day firearm hunt, which started six days later this year. The 2019 bow and crossbow deer kills are more than 100 animals ahead of last year at the same point of the season.

The longest-running citizen-science survey in the world – Audubon’s 120th annual Christmas Bird Count – is underway. Each count is held on a single day in an established, 15-mile-diameter circle.

Wisconsin hosts more than 100 counts, including a number of them completed this past weekend in the Brussels, Dyckesville, Ephraim, Sturgeon Bay and Washington Island areas. Kewaunee’s count is set for Jan. 3. To learn more or participate, email [email protected].

Learn more about the statewide count at audubon.org, wsobirds.org or ebird.org/wi.

A late-season goose-hunting opportunity is being offered for the second straight year in the southern zone, which includes the Kewaunee/Door peninsula. It began Dec. 16 and will run through Jan. 4, with a daily bag limit of three Canada geese and varying limits for other goose species.

Although few hunters are taking advantage, thousands of Canada geese are still hanging out in the area. The birds – many of them likely what are known as locals (born here) – roost on water, shorelines and beaches in between feeding flights to farm fields.

The U.S. Army Corps of Engineers says all data are preliminary and subject to change. The agency waits for the month’s average before considering historic marks.

The Wild Things column will not appear in the Dec. 27, 2019, issue but will return after that. Please direct comments, story ideas and questions to columnist Kevin Naze at [email protected].