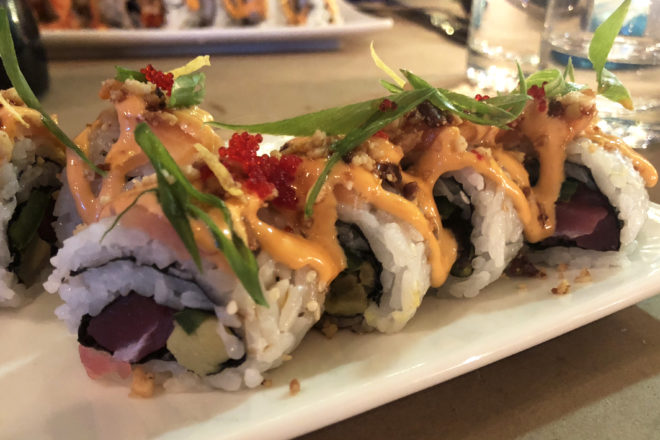 With the months of November and December come cravings of warm, savory meals. Chili, pot pies, warm casseroles and chicken dumpling soup come to mind as food that gets dismissed during summer but move back into favor during fall and winter. While it’s certainly delightful to indulge in these family favorites, my tastebuds can only handle so much day after day; after too much Midwestern comfort meals I start to crave something fresh and spicy — that’s when I declare it’s time for sushi. 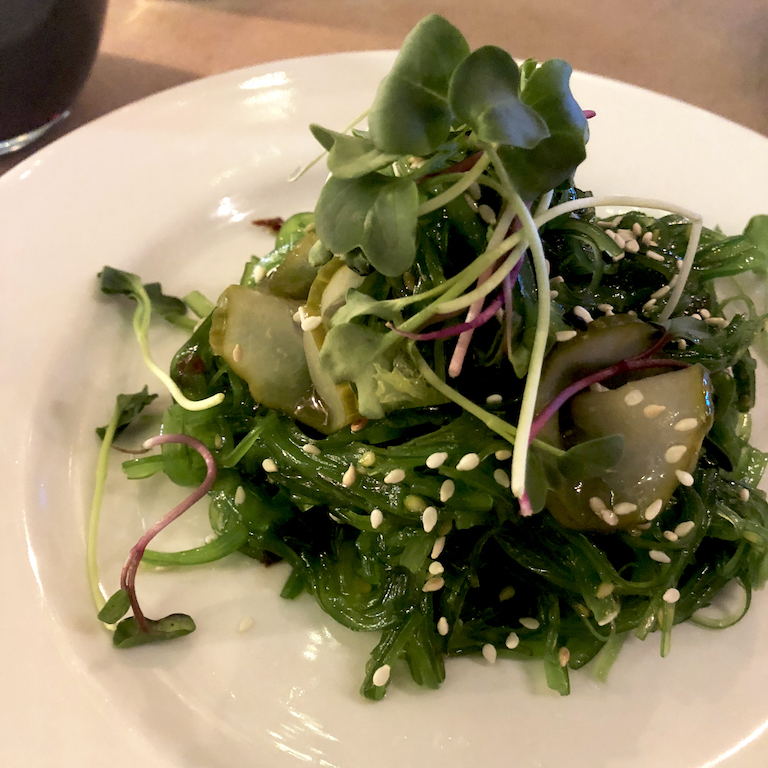 While living in Madison I found my favorite places to get sushi (Muramoto, Red Sushi) but I had not yet sought out a good spot for the Japanese cuisine in Door County. Several locations serve sushi as a special on certain nights — Mink River Basin on Fridays, AC Tap on Tuesdays and Carrington Pub on Saturdays — and some have limited items on the main menu, like the “Sushi Stack” at Lure. However, if you’re looking for true sushi specialties, Crate in downtown Sturgeon Bay is the only place billed as a sushi restaurant.

On a quiet Thursday evening I headed to the restaurant, located on Third Avenue in downtown Sturgeon Bay. Nearing the entrance, I heard the familiar voice of Bob Marley singing “Could You Be Loved” drifting faintly from the outdoor speakers, inviting visitors inside and out of the chilly night air.

Choosing a front window seat near the bar, I took in the unique atmosphere of the interior. Its name, Crate, is visually represented with fishing crates strategically stacked to the ceiling as a decorative feature throughout the space. The crates add a rustic feel to complement the contemporary bar design and elegant table seating.

The lighting was dim and relaxing, with Edison bulbs hanging down from the ceiling and white Christmas lights glowing from the greenery at the windows. The bar was underlit with green lights and next to it a large metal shape of Door County was backlit with blue lighting, casting ocean-colored shadows.

The drink menu offered varieties of sake, wine and beer, as well as sake cocktails. Our server informed us that any raw fish is sushi-grade, with some items using cooked seafood or only veggies. We started with two small plates: a Sesame Seaweed Salad and Poke Nacho. The seaweed salad is a classic sushi accompaniment and it was exactly what I was craving with plenty of sesame flavor. The Poke Nacho was delicious with fresh, cubed ahi tuna soaked in sesame ponzu sauce and served with corn chips and guacamole. The tuna tasted very fresh and had a soft, not-at-all-chewy texture, which paired well with the crunchy salted chips.

On the sushi roll menu, I found a good variety of options without being overwhelmed. The classic rolls featured the familiar options like the Philly, California and Spicy Crab or Tuna rolls. Sashimi and nigiri (sliced raw fish and sliced raw fish served over rice) was also offered, featuring seasoned versions of ahi tuna, salmon, eel and white tuna.

I searched for a roll with some spice and got a recommendation to try the Geisha Girl and Flaming Hooch from the signature roll section. Presented on their own plates, the rolls looked colorful and intricate when delivered. After prepping my soy sauce by stirring in some wasabi, I dove in. 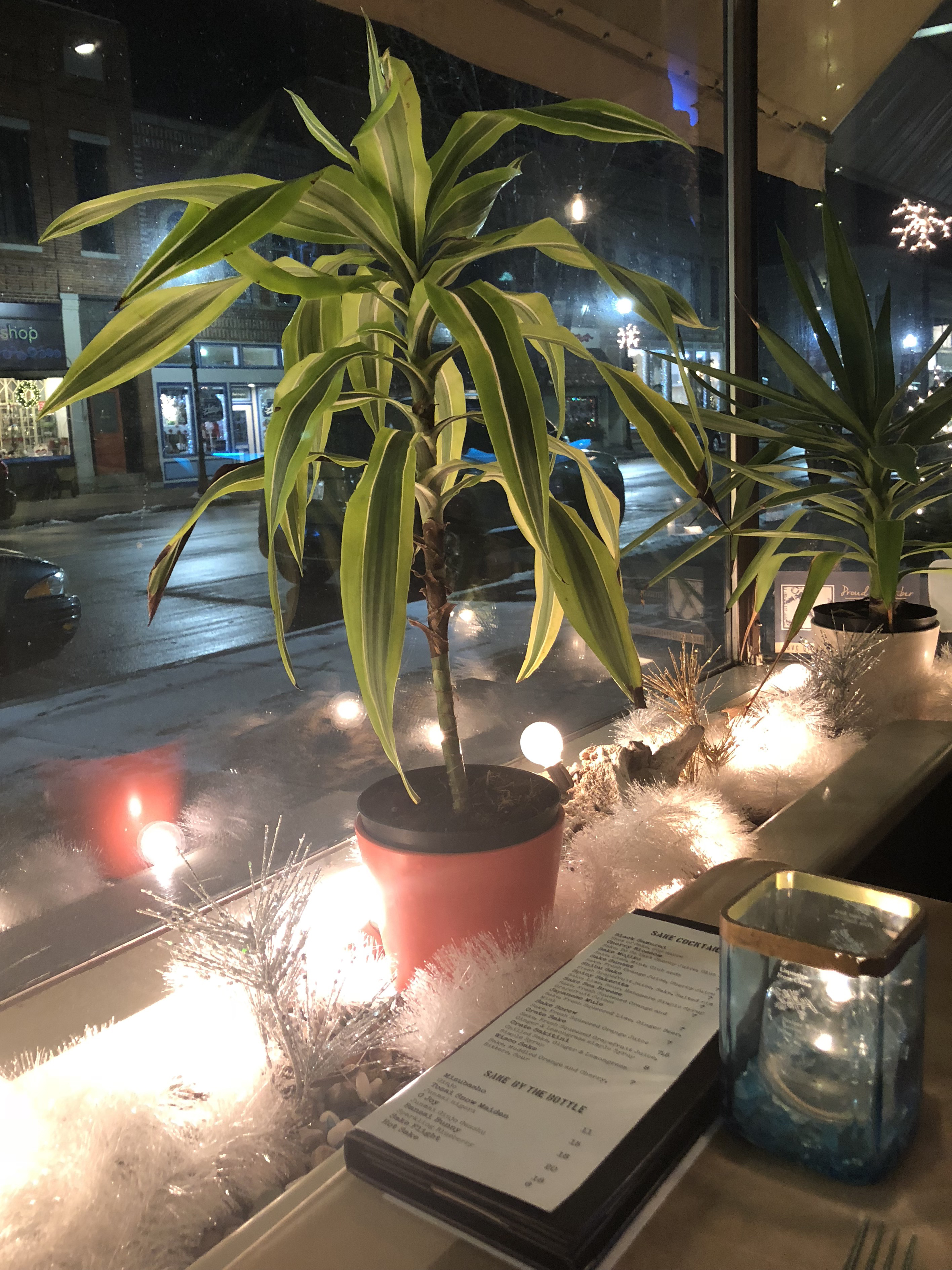 The Geisha Girl included tuna, avocado, salmon and jalapeño rolled and topped with rice, red tobiko, unagi sauce, spicy mayo and macadamia nuts. It had a nice crunch and bite of spice from the raw jalapeño. The flavor balanced the umami sauces and fresh fish.

The Flaming Hooch included tempura shrimp, cucumber and peppers rolled with rice and topped with spicy mayo, Sriracha Krab Salad and unagi sauce. It was a much creamier roll in texture and the flavor of crab was subtly accented with the Sriracha. It tasted delicious with a slice of pickled ginger.

As I finished my drink and listened to the reggae playing in the background, I could almost hear the crash of the ocean waves outside, but alas, it was a snowplow tending the streets. My sushi craving is sated for now, but I’m glad I’ve found an excellent place for a dose of seaside atmosphere with tasty seafood and Japanese flavors.