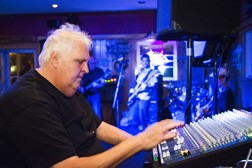 Since his passing, event organizers pat mAcdonald and melaniejane have been contemplating how best to honor Billy. It had already been decided that Nov. 1st would be the night that focused primarily on Billy and the “Dark Songs” music he was most involved with. It still didn’t seem like enough, though. What else do to in a way that Billy would be delighted and proud?

For those unfamiliar with a “Second Line,” it is a New Orleans tradition most often held as part of a funeral procession with the purpose of releasing and sending the soul to heaven. It is a celebratory event where costumed participants march through the streets lead by a “Master of Ceremonies” and, typically, a brass band.

James along with James Hall, who have both lived in New Orleans, are organizing this portion of the event which will kick off the inaugural night of Dark Songs performances.

The “Second Line” group will assemble at The Holiday at 6 pm (rain, snow or shine) and depart the motel to make their way through the town until they arrive at Third Avenue Playhouse at 7 pm where the parade will transition into the staged performances for the evening.

A limited number of seats at Third Avenue Playhouse will be reserved for Billy’s close friends and family. Those wishing to guarantee a seat for the evening’s tribute and performance should call the motel in advance. Those who are interested in participating in the “Second Line” parade are encouraged to call the motel in advance (920.743.5571), though all are welcome to join the procession.