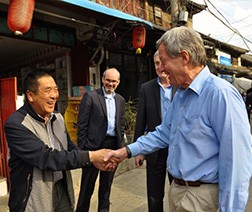 The Linden Centre, a heritage hotel chain and leading preservation advocate, was awarded Secretary of State John Kerry’s Citation for Corporate Excellence in a ceremony with the American Ambassador to China, the Honorable Max Baucus. The award ceremony was held in The Linden Centre and was immediately followed by a community preview of the Lindens’ third restored national relic, The Linden Commons, which will open to the public in April 2015.

The Secretary of State Citation recognized the Lindens’ efforts to preserve the region’s unique cultural heritage through the promotion of sustainable tourism. This annual award is presented to American owned-companies with outstanding records of corporate citizenship in overseas communities.

Ambassador Baucus praised the Linden Centre’s contributions to the local community and said, “As a result of the work the Linden Centre is doing, visitors from across China and from across the globe can better experience Yunnan’s unique cultural heritage and increase mutual understanding.”

Brian Linden added, “Our dream has always been to create a softer model of preservation, both of tangible and intangible culture, that can serve as an alternative to the ‘burn and slash’ type of building that has destroyed so much of China’s tangible and intangible heritage. The goal is to instill pride in the local cultural traditions. We are not here to import outside models, but rather encourage the locals to value their own history and develop a more homegrown and sustainable economic model.”

Known in Chinese as “Xi Lin Yuan” the Linden Centre is the passion and creation of Brian and Jeanee Linden, who have more than three decades of travel, business and cultural experience throughout Asia. They have been coming to China since the early 1980s, first as students, then as journalists and scholars, and later as partners in their fine art and antique galleries in the U.S., including the Linden Gallery in Ellison Bay. However, all these visits were only fuel for their dream to establish a base for deeper exploration of China’s cultural traditions. 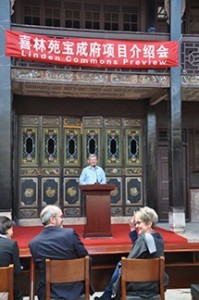 Ambassador Baucus toured the Lindens’ third nationally protected site which has been painstakingly preserved by the Lindens over the past two years. This new site, known as The Linden Commons, will serve as a base for learning programs in areas such as culinary, painting, weaving and wood carving. It will have 14 elegant guestrooms, a restaurant, bakery and cafe, and conference facilities. Ambassador Baucus praised the Linden Centre’s work, saying “its blend of preservation and sustainable tourism is unique and sets a great precedent for other parts of China.”