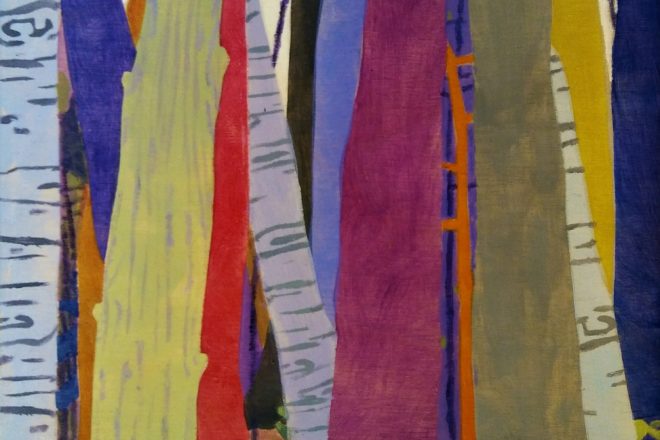 A closer look at Door County artists’ fascination with trees

A walk through the galleries of Door County reveals an abundance of landscape paintings depicting trees in various shapes, forms, colors and seasons. Unfortunately, that doesn’t mean the trees viewed in these galleries provide a useful botanical guide. In fact, you’d have a real struggle to find a tree in nature that looks like the one painted by artist Lynn Gilchrist.

“I feel you know what a tree looks like, so why should I try to outdo nature?” said Gilchrist, who shows her work at Idea Gallery in West Jackson.

She admits she has never been interested in painting the realistic.

“I look at certain trees and think it is maybe purple, pink or blue. I tend to think that the trees do have personalities inside their stoic exteriors and maybe I am letting their real personalities come out.”

Then again, her take on trees could also be an excuse to simply use the colors she likes.

“With my art, I am trying to say it’s not just some pretty woods,” she said. “I am trying to make a little world of colors that make me happy. I prefer to find my own essence of them — and I love color — so I amp it up a little bit.”

But what is it about trees that grab the creative attention of so many artists?

“What an interesting question,” said Mac Schueppert, a pastel painter in Sturgeon Bay.

She pondered the question for quite some time before landing on the dramatic lighting often seen among the trees as what draws her in.

“Trees always provide that spark,” she said. “Those shafts of light that cut through the woods and spill out onto the forest floor, the sky holes that pierce the canopy, the dappled sunlight filtering through the leaves are incredibly fun to paint!”

Trees also lend structure to Schueppert’s paintings, which she shows at Fine Line Gallery in Ephraim.

“After establishing the horizon line on the paper, the next marks are vertical tree lines which start to create depth and perspective,” she explained. “Trees are dark upright shapes that contrast with the sky and land. I use trees to lead you into my paintings, frame a view, and guide you to my focal point.”

But her favorite part about incorporating trees into her paintings is how they allow her to express her sense of color.

“I exaggerate and expand the barest hint of color I observe in trees enjoying the interplay of rich warm and cool colors,” she said.

But she doesn’t just take the color she sees in front of her.

“I can see a lot of color in the trees when I am looking at a bank of trees,” she said. “I pull out the color I see in the shadows, or when light is striking trees I pull out warm colors. I jump off from there, because if I did a painting of all green trees it would be boring.”

When it comes to painting trees throughout the seasons, she prefers summer and fall.

“Spring is still pretty dull and brown,” she said. “I have done some winter paintings, but do people really want to buy winter painting when they live it nine months of the year?”

Most of her paintings that feature trees show them as straight lines, without a lot of leaves or branches, the foreground and background often changing from painting to painting.

Her paintings, she explained, are created as quickly as the idea evolves. She might start with some trees and then put more trees behind them, or add a foreground to give a sense of a path into the woods.

For Terry Walsh, a painter who divides his time between the Chicago area and the UP but shows his work at Fine Line Gallery in Ephraim, his approach is somewhere between exact representation and his own creative interpretation. He thinks of his paintings as stylized rather than realist, using color, hue, contrast and sometimes saturation to push parts of an image forward or back, creating a sense of depth or, in a painting of two birches, flattening the perspective.

“I don’t want it to be photographic,” he said, adding that he thinks his work is a cross between the Hudson River School and post-impressionism and inspired by the works of Vincent Van Gogh, Camille Pissarro, Georges Seurat, early Henri Matisse and Paul Cézanne. ”People who strayed from the natural tones and started juicing up their saturation of color.”

He often works from photographs, sometimes using multiple angles and software to create the image he wants.

“I use Photoshop [as] a weed wacker to clear the debris field on the ground, recompose the image,” he said.
He then makes an 8×10 copy from his printer and works from that to generate the amount of depth I am looking for.”

His goal is to create an interpretation of God’s creation, the nature image itself without the cute effects some painters use.

“I don’t put birds in the paintings or sailboats or little cabins in the woods with smoke coming out the chimney.” He is satisfied with the trees, the spaces between them and the light.

“For me it is like a meditation and I hope it is for viewers, too.”