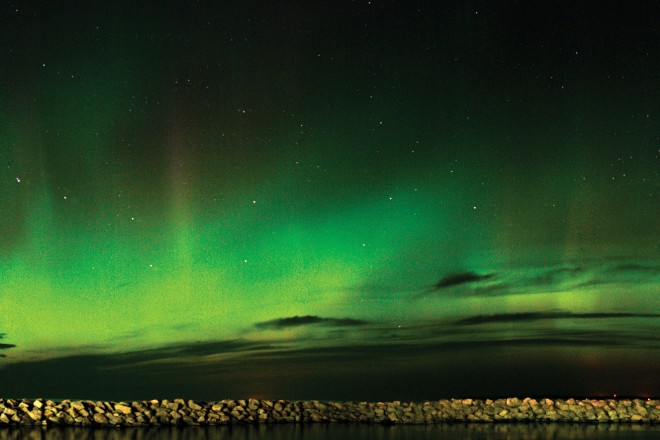 Ask five or six peninsula visitors how often they might expect to see the aurora borealis and you are likely to get five or six different answers – once a year, maybe, if they’re lucky, they’ll say; or once every couple of years; or once or twice in a lifetime. What the answers will all have in common is the idea that a sighting of the aurora, or the “northern lights,” is sure to be a rare occurrence.

But spend some time with serious sky watchers and you will learn that, actually, there are multiple opportunities every year to experience an aurora in one of its many mysterious forms in the deep night sky. For the auroras – one each over both the north and south poles – are ever-present features of the earth’s environment. They are dynamic systems caused by charged particles in the solar wind crashing into electrons and protons of the earth’s upper atmosphere; these particles give off light as a result of the energy released. The auroras are always changing, but always there.

“Have I seen the aurora? Oh yes, many times,” says Dr. John Beck with enthusiasm. He is a family physician in Sturgeon Bay and an amateur astronomer who currently serves as president of the Door Peninsula Astronomical Society. Dr. Beck has learned his way around the night sky and has placed five pages of helpful tips for beginners on the society’s website.

Although the existence of the aurora has been known throughout recorded history, it is only since the 1960s, when weather satellites began to circle the polar regions, that we have become aware of the auroras’ permanence. As the satellites skim across the poles, they look downward at twin auroral halos crowning each pole.

As explained by T. Neil Davis, author of The Aurora Watcher’s Handbook (1992), the two halos each sit atop the denser part of the atmosphere, usually 50 or 60 miles above the earth’s surface. They often consist of weak, parallel arcs a couple hundred miles in width. At such times only persons living very far north – near the North Pole – can see the aurora borealis. But during times of high solar activity, the ovals widen and expand in the direction of the equator. Then auroras might be seen directly overhead in all their bright and colorful glory in central Alaska or Canada. They also might be experienced hundreds of miles away by people at lower latitudes, although in diminished brightness and colors. On the average, says Davis, such auroras are visible somewhere in the earth’s mid-latitudes (generally 35 to 45 degrees north of the equator) one night in every three or four.

Door County, half way between the equator and the North Pole, straddles the 45-degree latitude. From this location on the northern edge of the mid-latitudes, the county is an excellent place to see some of those more-subdued but frequently-occurring light shows. Also, the peninsula, with its miles of shoreline and its inland landscape of fields and meadows, offers an abundance of open sky with unobstructed views – essential for aurora viewing.

Kathleen Harris, the naturalist at Peninsula State Park, plans three night sky programs each year – two in the summer, one in the fall. Harris has seen dozens of auroras and often hears the campers speak about them. The viewing gets better late in the season. She says, “I think August is a good month to see one; probably because the nights are getting longer.”

When asked to describe her most vivid aurora memory Harris has trouble selecting just one. “I saw one five or six years ago that was unforgettable; the aurora was a vivid green and there were big sheets of it across the sky.” But then she fondly remembered a late night walk in the fall years ago. While her newborn son slept soundly, she walked. “It was near Baileys Harbor between the upper and lower range lights; there were green and yellow sheets just moving across the sky. It was so peaceful and hopeful.”

The “sheets” which Harris uses to describe what she has seen are a common auroral form, but an observer might also see columns or shafts of light, patches of glowing light, or arcs. The forms may be smooth or striated, and the light may be quietly steady or pulsating and flickering.

Dr. Beck describes a particularly exciting combination. “I went out to watch the Perseid Meteor Showers and oh my goodness.” Instead of viewing the hoped-for meteors he spent the next four hours watching a Technicolor aurora from a lounge chair in his driveway. “It was still continuing when I went in to bed around 3:00 am. It was a spectacular coronal aurora. Now that’s unusual. A cloud of light flashed on and off; streams of color would shoot up and swirl around; and it filled the entire sky in a circle around me.”

You too can expect to see the aurora if you pursue the opportunity and wait for the right conditions. In addition to an open sky, you will need a dark, clear night (free of both cloud cover and bright moonlight). Your chances of seeing an aurora will be greater if the clear night follows two or three days after a strong geomagnetic storm – for this you’ll need advice from the experts. There are a number of online websites where such “space weather” is tracked and these will send aurora alerts by email to those who request them. Dr. Beck recommends a service maintained by the Geophysical Institute at the University of Alaska Fairbanks (ww.gi.alaska.edu/). Even without such help from the professionals, remaining vigilant about the conditions and being patient in your watching can reward you – perhaps often.

Gerry Kocken of DePere is Dr. Beck’s counterpart, president of the Neville Public Museum Astronomical Society in Green Bay. He too has seen countless auroras and receives the email predictions. A lifelong sky watcher, he has encountered the aurora many times just by being there – the right place, at the right time. “It just depends on when you’re out and when you’re looking,” he says. “I often see them when I’m driving around up north. I just stop and enjoy the view; it is one of nature’s gifts to us.”

A Few Resources for the Aurora Seeker

Whitefish Dunes, Peninsula, and Newport State Parks all have occasional night sky evenings as part of their naturalist programs. Though not addressing the aurora specifically, the program leaders will certainly offer tips to anyone seeking such information.

The Door Peninsula Astronomical Society meets on the first Tuesday of each month at Crossroads at Big Creek in Sturgeon Bay where it has the use of the Leif Everson Observatory, and the public is invited to view the heavens with members of the astronomical society following their meetings. Public viewing sessions are typically scheduled from September through April (www.doorastronomy.org).

Crossroads at Big Creek is an independent center for environmental, historical, and scientific learning. It is located at the intersection of Hwy. 42/57 and Michigan Avenue, Sturgeon Bay. Call (920)746-5895; on the web: www.crossroadsatbigcreek.org.

Sky and Telescope Magazine has several in-depth articles about the aurora available on line at www.skyandtelescope.com.

The Aurora Page is a collection of links and aurora photographs maintained by Michigan Technological University, Houghton, MI, at:  www.geo.mtu.edu/weather/aurora/index.html