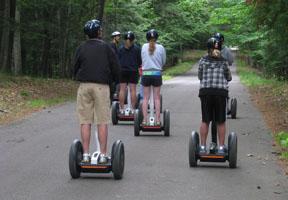 When I meet Nick Dokolas, the owner of Segway the Door, in the parking lot of Nelson’s Hardware in Fish Creek, I try to be as confident as possible, but inside I am a ball of nerves. I am not prepared to get on a Segway and ride through the elevations of Peninsula State Park. I try to think of a way that I can write an article on a Segway tour without actually having to take the Segway tour. My last experience with a motorized vehicle of this nature ended badly when I crashed a rented ATV into a tree in the Dominican Republic.

Sensing my hesitation (and the hesitation of the other six people in my group), Dokolas laughs and puts all of us as ease. “All of you are going to be just fine,” he says. One woman from our group pipes up. “How did you know we were scared?” she says. Dokolas smiles and says, “Everyone has the same look on their face before they get on one of these. But then you learn how to use it and you instantly want one of your own.”

For those of you who aren’t quite familiar with it, a Segway is a two-wheeled, self-balancing electric vehicle that can go up to 12 miles per hour. Computers and motors in the base of the vehicle keep the Segway upright when powered on with balancing enabled. A user leans forward to go forward, leans backward to go backward, and turning is done by using a “Lean Steer” handlebar to lean the machine left or right.

The true beauty of the Segway, however, lies in the fact that there are gyroscopic sensors that are in the machine that can detect tilting of the device. These sensors indicate a departure from perfect balance, and when that happens, motors driving the wheels are commanded as needed to bring the vehicle back into balance. In short:  it’s very difficult to fall off a Segway.

The Segway was first produced in 2002, which still makes it a very new device for many people. Dokolas remembers the first time he saw one.

“I thought it was the coolest thing I had ever seen,” he says. A short while later, he read an article in an AAA magazine about people creating businesses from offering Segway Tours. He instantly thought about bringing the Segway to Door County to offer his own variety of tours. Dokolas’s wife is from Door County, so he was familiar with the area and knew the county would have many roads and paved trails perfect for a tour. Spending the majority of his year in Bakersfield, California as a sixth-grade teacher, Dokolas also wanted to find a way to get his family out of the hot California sun for the summer months – and the tours would afford him the excellent opportunity to do just that.

Dokolas began Segway the Door in 2004, and since then, he estimated he has taken 2,000 people on Segway tours. Patrons can pick from a few different tours, but the most popular one by far is the Peninsula State Park tour.

“People love this tour, because they see things that you normally wouldn’t see if you were driving in your car,” he says. The Segway doesn’t make a whole lot of noise (Interesting fact:  Early Segways didn’t make any noise. Users were a bit unnerved about this fact, so the next production batch of the vehicles were designed with its now-familiar purr), so it’s easy to spot wildlife that might easily be scared away by a car motor. Another point in the Segway’s favor is that you are able to cover more ground than if you were taking a leisurely walk.

A typical Segway the Door tour begins with an informal lesson on how to appropriately board, drive, and get off the vehicle. Dokolas took our group to Lot G near the Ephraim entrance of the park, where we spent about a half an hour learning how to appropriate our body movements so that the Segway would respond in the way we needed it to. After that, we headed out into the quiet and beauty of Peninsula State Park, where Dokolas taught us how to maneuver up and down hills. Within fifteen minutes, the scaredy-cat of the group (me) was racing up and down hills with a glee usually only reserved for driving 70 miles-per-hour down the freeway.

At the end of the hour-and-a-half tour, I have to admit that I didn’t want to get off my new favorite motorized vehicle. I zoomed around in circles in the parking lot until I realized I was the only one who hadn’t handed the Segway back over to its rightful owner.

“I kind of want one of these,” I say to Dokolas.

Segway the Door offers a handful of different tours – a tour through Peninsula State Park, Rustic Road to Cana Island, a “lighthouse ride” along Ridges Road, and a half-day tour to Washington Island. All tours include a lesson and a hour-and-a-half tour, with the Washington Island tour including a ferry ride and lunch. For pricing information, or to make a reservation, call 920.376.0256 or visit http://www.SegwayTheDoor.com.