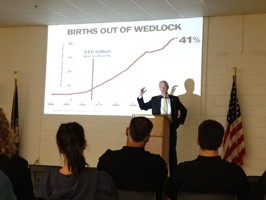 Sen. Ron Johnson spoke at N.E.W. Industries in Sturgeon Bay on May 1, where he advocated less federal spending and regulations. Photo by Matt Ledger.

Wisconsin’s senior senator, Ron Johnson, stopped at N.E.W. Industries in Sturgeon Bay on May 1 to lay out exactly what challenges are currently facing the federal government.

In a presentation given to N.E.W.’s workers and members of the public, Johnson said the size and scope of the federal government is hampering the American people and the economy. As of Dec. 2012, the federal debt was measured at more than $16,432,730,050,569.

Johnson said the primary driver of all that federal debt was spending on programs such as Medicare and Social Security that are paying out more money than they’re taking in.

“It really is healthcare spending that’s driving our debt and deficit,” said Johnson. “Part of the problem with why the federal budget is so out of control is because so little of it is controlled. If [the management team at N.E.W. Industries] ran their budget like this … and said, ‘Whatever you need to spend on healthcare, spend it’…this company wouldn’t exist and you wouldn’t have a job. This company would be bankrupt.”

Johnson said Republicans in Congress aren’t interested in destroying programs or dismantling government, but rather simply bringing America to a place where it’s living within its means.

“Nobody’s proposing cutting anything,” said Johnson of the 10-year budget proposed by the Republican-controlled House of Representatives, which would reduce government spending during the next 10 years by $5.7 trillion.

“We’re just trying to limit the rate of growth so that we don’t hit a debt crisis so we can stop putting a debt burden on our children and grandchildren.”

Johnson also said the government needs to take a step back and get out of the way of businesses.

“To me the root cause of what’s ailing our economy, what’s preventing job creation, what’s threatening our children’s future, what’s really ailing our culture is the size and the scope of all the rules, all the regulations, all the intrusions of government into our lives,” he said. “We are burdening our job creators with $1.75 trillion in regulatory costs. We absolutely have to modernize regulations.”

If the government reduced regulations and simplified the tax code, argued Johnson, America’s economic recovery would quicken, and the federal government would bring in more money.

“Even with the meager economic growth we had from 2009 to 2012, revenue of the federal government has increased by $344 billion per year. If we would just return to a normal economy like we had in 2007… revenue would increase per year by $435 billion,” said Johnson.