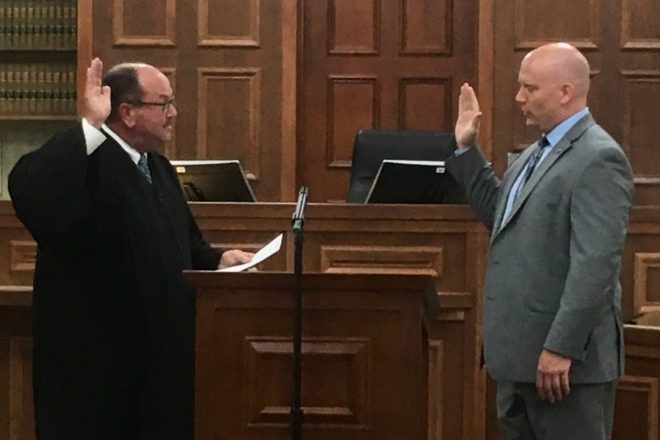 The benches in Judge D. Todd Ehlers courtroom were filled with supporters as Caleb Frostman was sworn in as the new Senator for the 1st District. Frostman, the first Democrat to hold the title since Jerome Martin died in office in 1977, is the first Door County resident elected to the seat since Alex Meunier of Brussels served from 1963 to 1970 (when Martin was elected).

Frostman won the June 12 special election against Republican Assemblyman Andre Jacque of De Pere, 14,606 to 13,600. Frostman and Jacque are expected to face off again in November, however, Jacque has to win the Aug. 14 Republican primary, where he is being challenged by Washington Islander Bill Nauta.

Before swearing him in, Judge Ehlers said he hoped Senator Frostman would go forward with three principles in mind – civility, progress and opportunity for all. Frostman said he does plan to bring a message of inclusion, opportunity and hope to work in his new role. He thanked the supporters who filled the benches in the courtroom for their energy and enthusiasm during the campaign.

“I look forward to serving you in the Senate, hopefully for more than six months,” he said. Frostman told the Pulse he is in the process of hiring one full-time staff person familiar with the district to work in his office through the fall, adding that should he be re-elected, he will hire two additional staff members as allowed a state Senator.