“Up from the meadows rich with corn,

Clear in the cool September morn.” 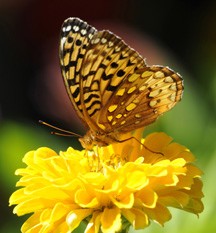 The ripening corn of September brings joy to the hearts of Raccoons and White-tailed Deer. Add apples to that fare and they will feast like royalty. Fortunate are those farmers and gardeners who can plant enough for both people and wildlife who know no bounds.

It’s early September and already the Quaking Aspens’ leaves take on a different shimmering quality against the deep azure sky. Sulphur Butterflies fly in their zigzag manners, matching in color the myriad goldenrods set off so handsomely against the dark edges of cool woods.

More and more Crickets are adding their voices to the evening concert. Now and then a Cicada’s high whine, feeble in its last stage, has nothing more to say but that which accompanies falling temperatures of early September.

This is autumn in her infancy, a season which many of the largest trees have seen come and go a hundred or more times. On the other hand it’s a first and last experience for the Great-spangled Fritillary Butterfly, an insect that had an unusually good summer this year judging by its high numbers. 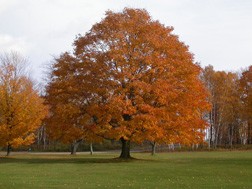 A beautiful crown and rich color of an open-grown Sugar Maple.

The strikingly formed and subtly colored lichens – nature’s indicators of pure, sweet, fresh air, silent though they are – speak their own way with intensity and clarity. British Red Soldiers, Reindeer “Moss,” Pixie Cup Lichens and a host of other species put their best foot forward during September, the morning air and plants being laced with moisture. Surely it must have been during September when Thoreau wrote, “This is a lichen day.”

Now the hidden colors of the various trees have their final and glorious say. Chlorophyll quickly disintegrates into the atmosphere exposing the oranges, yellows, reds, purples and tans which were merely hidden within the leaves’ layers of green during the summer. Sunny, blue-sky days will help to produce vibrant reds and oranges in the Sugar Maple leaves, for example. Should it happen that very few sunny days occur as the leaves change color, the intensity of a remarkable sugary chemical, anthocyanin, will be decreased, thus the maples will be more yellow than orange or red.

As much as many people tend to believe, frost (its presence or absence) plays no part in the coloring of the fall leaves. Brilliant sunshine will bring out the best deep purples the ashes can produce, and Sugar Maples will show their most dazzling colors from miles away. Surely individual trees – due to their health, natural supply of soil minerals and moisture and other delicate factors – will display color earlier or later and be more or less intense.

According to the findings in the field of aerodynamics, Bumblebees, for their weight and small wing surface, can’t fly, and some old wives’ tales indicate they cannot sting. Obviously neither statement is true. These hairy bees may begin to stumble and bumble during some cold September snaps, but rejoice that they have done such great work for us. Our large patch of red Monarda or Bee Balm was literally swarming with these welcome hairy insects, along with several Ruby-throated Hummingbirds, throughout much of the summer. 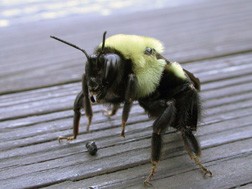 A Bumblebee rears up to defend itself.

You can be assured that, come spring, the comparatively large queen “bumbees” will be afield in search of the very first makings for bee “bread.” We could very well pause at our outdoor work and offer a word of thanks to the Bumblebees, one of the greatest assets to mankind. Harvest your garden and field crops with a tip of the hat to the bees!

Quiet, cool, late September nights may produce some mysterious aerial sounds for those willing to pry themselves away from “the tube.” One of the most memorable occurred between 11 and 12 pm, Sept. 18, 1963. I was teaching at the Door-Kewaunee County Teachers College in Algoma at the time and had finished some late schoolwork at my second-story downtown apartment within a block of Lake Michigan.

The night was very still and the air extremely foggy as I stepped outdoors onto the back porch for a breath of fresh air before retiring. The foghorn was blasting away as so often happened there. Suddenly the sounds of chirping birds reached my ears. My first impression was, “Those stupid House Sparrows on the roof, why don’t they go to sleep!”

I listened again. Those weren’t sparrows. They were migrating songbirds, thousands of them! I ran into the house, got my tape recorder and parabolic reflector and breathlessly held it skyward for the next half hour. What I didn’t realize was just minutes earlier Sam Robbins, famous Wisconsin ornithologist who at that time lived in Cadott, had experienced the same phenomenon.

He in turn called Dr. Charles Kemper of Chippewa Falls, who called professor Arol Epple of Stevens Point, who called Al Holz of Green Bay. What those four nighttime bird-chirp counters, all good friends of mine, didn’t know was that a fifth counter, me, had joined them in witnessing one of the most remarkable migration phenomena ever recorded in Wisconsin during modern times. 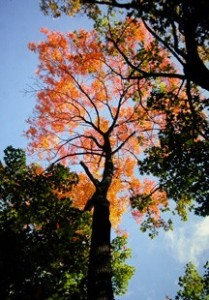 Later, in discussing the spectacle with Sam Robbins, he estimated that the number of birds that passed within hearing distance of his home that night was in excess of 20,000. The total estimate of night-flying birds for the state that Sept. 18, 1963 ran into the millions.

If you want a memorable late September bird experience, drive to Duluth, Minn. to their world famous Hawk Ridge Bird Observatory to witness the incredible fall migration of raptors. You will also enjoy a fantastic scenic vista overlooking Lake Superior from high along the bluffs.

Had you been one of the lucky people to be there on Sept. 22, 1970 you would have counted 24,300 Broad-winged Hawks alone! In one day! Now do you begin to read “spectacular” into this performance?

Oh to be a hawk on a crisp September day, free, unhurried, soaring, towering high above the earth, following rising air currents, ascending and drifting, gliding and lifting, aimed in flight toward the South, and at perfect peace with the world!