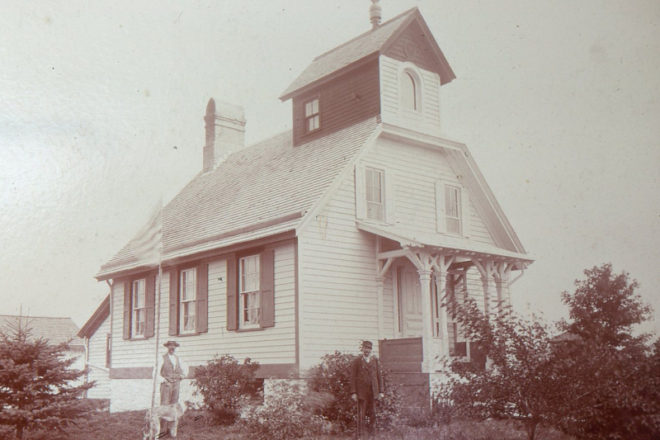 The new flags flying up and down Highway 57 through Baileys Harbor represent two summer celebrations that will recognize the village’s long role in maritime history.

The Upper and Lower Range Lights and the Cana Island Light, all built in 1869, are among the oldest of Door County’s 11 lighthouses and are celebrating their 150th birthdays this summer. Only Baileys Harbor’s Bird Cage Light, which served from 1853 to 1869, and the Eagle Bluff Light, which celebrated its sesquicentennial last year, are older.

On Friday, June 7, kicking off Door County’s three-day Spring Lighthouse Festival, The Ridges Sanctuary will hold a social and tours of the range lights from 3 to 6 pm.

An outdoor program at 4 pm will open with a color-guard presentation. A welcome from The Ridges’ board president, Tony Fiorato, and the reading of a resolution by Rep. Joel Kitchens will follow. Sandy Miller, secretary of The Ridges’ board, will give a brief history of the Range Lights; Charlotte Lukes will tell about her experience of living in the Upper Range Light from 1972 to 1982; and a representative of the Coast Guard will talk about the relighting of the range lights in 1996. The program will end with Steve Leonard, executive director of The Ridges, providing a thank-you and report on the status of the capital campaign to continue restoring the Upper Range Light.

The social event and tours of the range lights will continue until 6 pm.

History of the Range Lights

The Upper Range Light was 17 feet higher than the Lower Range Light, so when ships entering the harbor aligned the lower red light with the upper white light, which could be seen for 13 miles, they could follow the deep channel into port. The range lights are the only lighthouses of this design still functioning as navigational aids since their lights were permanently relit 23 years ago.

The range lights had eight keepers during their years of operation. Joseph Harris Jr. was the third keeper. Ironically, his father was a strong promoter of the Sturgeon Bay Ship Canal that, by 1890, enabled much of the shipping trade to bypass Baileys Harbor.

Henry Gattie, the keeper from 1896 to 1923, was a sought-after bachelor until he married Eve Hendricks of Baileys Harbor in 1901. A local newspaper reported that guests danced until the wee hours in the Baileys Harbor Town Hall to the music of the Duclon Orchestra, comprising the Eagle Bluff Lighthouse keeper, William Duclon; his wife, Julia; and their seven sons. Partiers said they had so much fun that they wished the Gatties could be married at least once a month.

The range lights were wired for electricity in 1923, and the keeper’s house stood empty until 1930, when it became the Immanuel Lutheran Church’s parsonage. The pastor’s wife reported that, even with a wood stove in the kitchen, water froze to the floor when spilled.

In 1934, the Bureau of Lighthouses deeded the 30-acre site of the range lights to the Door County Park Commission. The commission promptly outraged the community by allowing a trailer park to be built on the site, which held fragrant arbutus, 25 species of orchids and other rare plants. In 1937, the newly formed Ridges Sanctuary secured a lease of the land from the county.

The keeper’s house was rented to the Golke family for a number of years after the church stopped using it in 1955. The late Roy Lukes, The Ridges’ first executive director, occupied the home from 1964 until 1982.

By 1990, the range lights, the oil house and the two-hole privy were on the National Register of Historic Places, and a new, 99-year lease was in place between The Ridges and the county.

In 1992, The Ridges began a fundraising campaign to restore the Upper Range Light. Much restoration and repair work has been done, but as of April 1, an additional $110,000 is needed to complete the work by next summer. The Lower Range Light was fully restored in 2012, and the lights in both are now permanently lit. From June 1 to Oct. 31, 2018, more than 8,000 people toured the Upper Range Light.

The committee responsible for the celebration of the Range Lights Sesquicentennial includes Carrie Dorski, Kevin Osgood and Sam Perlman of the Door County Maritime Museum; Drew Richmond of The Ridges; Cambria Mueller of the Door County Visitor Bureau; Katie Hohmann and Brynn Swanson of the Baileys Harbor Community Association; and lighthouse historians Ed and Sandy Miller.

The Range Lights Sesquicentennial has received attention from around the country. Extensive stories and photos have appeared in The Beacon, the official publication of the Great Lakes Lighthouse Keepers Association, published in Mackinaw City, Michigan; and The Lighthouse Digest, published in East Machias, Maine.

The 150th anniversary of the Cana Island Lighthouse will be celebrated on Aug. 7, National Lighthouse Day.

Many of the tours are unique to the Lighthouse Festival weekend and provide visitors with exclusive access to several lighthouses that are not typically open to the public, including the Chambers Island Lighthouse, Plum Island Range Lights and Sherwood Point Lighthouse.

There are tours for all levels of activity and accessibility. Some involve hiking; others travel in Door County Trolleys. The land and boat tours leave from multiple locations and include a ghost tour, a naturalist tour, a cruise past numerous shipwreck sites and a trip on a 19th-century tall ship.