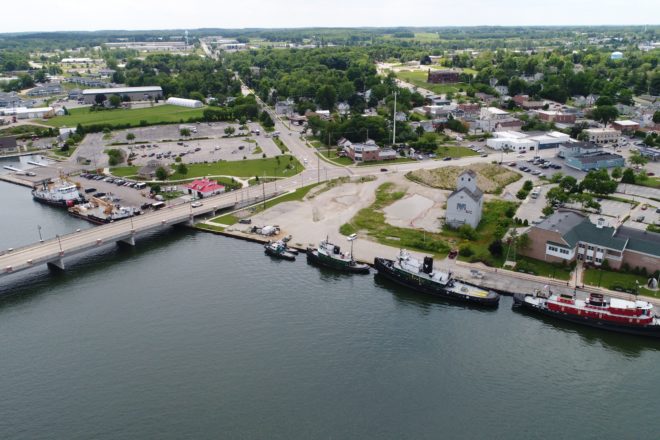 The Sturgeon Bay Common Council adjourned from closed session July 18 without taking any action on a settlement agreement reached between the Friends of Sturgeon Bay Public Waterfront (FSBPW) and the city’s ad hoc settlement committee.

The adjournment came suddenly about 30 minutes into closed session, when Mayor Thad Birmingham and Alderman Stewart Fett each said they had to leave.

The Pulse has contacted both Birmingham and Fett for comment on the abrupt ending to a meeting where the city was scheduled to vote on a proposed resolution to a stalemate that has dominated council meetings since 2015.

The Friends group and the city’s settlement committee met for two days in a mediation session in June. That resulted in a agreement to jointly recommend to the DNR that it approve an Ordinary High Water Mark (OHWM) parallel to and 60 feet waterward of the original meander line according to the U.S. government land survey of 1835 at 100 E. Maple.

On July 17, the WRA tabled its own vote on the settlement proposal. After meeting in closed session, the WRA decided it did not have enough information to vote, further delaying a resolution to the long-running dispute over the development of land on the city’s west side waterfront. To take effect, the resolution would need to be approved by the WRA, the Common Council, and be accepted by the Wisconsin Department of Natural Resources. With those agreements in place, the city and FSBPW would request that Judge Raymond Huber remove his injunction against development on the west waterfront.

“The motion was made to table the vote until we get more information about what uses might be permitted on the parcel beyond the high water mark agreed upon in the settlement,” said WRA member Ward.

Ward said the WRA will also confer with attorney Paul Kent, an expert in water law, before making a decision.

According to the Public Trust Doctrine, anything built beyond the OHWM must have a maritime or public use, but the WRA is unclear on what that might mean for a developer of the parcel. In her statement to the council, Hauser noted that the proposed settlement would provide an approximately 64,000 square foot lot above the OHWM for private development. That compares to the new Bay Lofts apartment, which is built on a 47,366 square foot lot, and the Door County Maritime Museum, which sits on a 30,819 square foot lot.

The failure by the city and WRA to approve the agreement likely means the Aug. 3 Department of Natural Resources Declaratory Hearing will be held as scheduled.

Revelations that the city has ignored a 2009 agreement with the Department of Transportation (DOT) requiring it to connect Grant Avenue to Sawyer Drive did not stop the council from giving final approval to a Planned Unit Development (PUD) for a 56-unit apartment complex at the corner of Grant Avenue and Sycamore Street off Hwy. 42/57.

Alderwoman Kelly Catarozoli presented the board with a 2009 agreement between the city and DOT in which the city agreed to a number of provisions in order to get approval to build Grant Avenue off of Hwy. 42/57. A memorandum of agreement between the city and the Northeast Region Office of the Wisconsin Department of Transportation required that the city connect Grant Avenue with Sawyer Drive within five years, or upon the building of more than 15 housing units, or when the large commercial lot on Grant Avenue was developed. In addition, the agreement required the city to construct and maintain a 16-foot wide driveway between Sawyer Drive and Grant Avenue, and any improved streets within the subdivision.

“The traffic generated by the proposed development and the increase in the background traffic in the area will have a direct impact on the traffic flow of STH 42/57,” the agreement states.

Catarozoli was stunned that she had to contact the DOT herself to learn about the agreement.

“This agreement with DOT requires us to put this connection in,” she said. “We are in violation of our contract with the DOT.”

The road was built when developer William Huff proposed a development on the property, which the city agreed to contingent on Huff extending Sawyer Drive to Grant Avenue to serve as a secondary access to the property, per the DOT requirements. But when Huff went bankrupt, the properties he owned that would connect the streets were sold to new property owners and taken out of the city’s control. The city is now in accelerated negotiations to buy the land to connect the roads. If that fails, the city will have to acquire them through eminent domain, Mayor Thad Birmingham said.

“The DOT has never contacted the city about any concerns about the connection,” Birmingham said. “I would guess they have the ability to come to the city and force that connection.”

“That connection is important,” said Marty Olejniczak, the city’s community development director. “I would argue that requirement is there whether or not you approve the PUD. It makes sense from a planning standpoint.”

“If the DOT is going to force the issue than we’re going to have to address it and take care of it,” Birmingham said.

Hauser said the revelation about the DOT contract once again raised the question of whether city staff and aldermen were performing due diligence in communications with developers and the public.

“We wouldn’t have known about this if it hadn’t been brought forward [by Catarozoli],” she said. “How does this information keep disappearing?”

In June developer Bob Papke pulled his plan for a hotel on the west waterfront and filed suit against the city when it was revealed that city staff knew since at least 2013 that there were questions about whether it could get clear title to the land on filled lakebed on the west waterfront.

On second reading, the common council revised the ordinance approved at its July 5 meeting. The revision requires that hives be kept 25 feet from all property lines instead of 10, and removes the requirement for a flyway barrier.

The beekeeping ordinance was created so that those pursuing beekeeping will no longer have to apply for a conditional use permit to keep bees in the city.

The council denied a request by Sonny’s Pizzeria to construct a selfie station on city waterfront property adjacent to the restaurant at the foot of the Michigan Street Bridge. The council sent the request to the Parks and Recreation Committee for further review after council members expressed concern that it would open the door to advertising elsewhere on the waterfront.

The proposed selfie station depicted the Michigan Street Bridge at the top, a Door County logo on one side, and the Sonny’s logo on the other.

Kelly Catarozoli said it would set a precedent for other companies to get the same opportunity.

“This is like a billboard basically,” she said. “This could lead to a whole lot of other signs on our waterfront.” 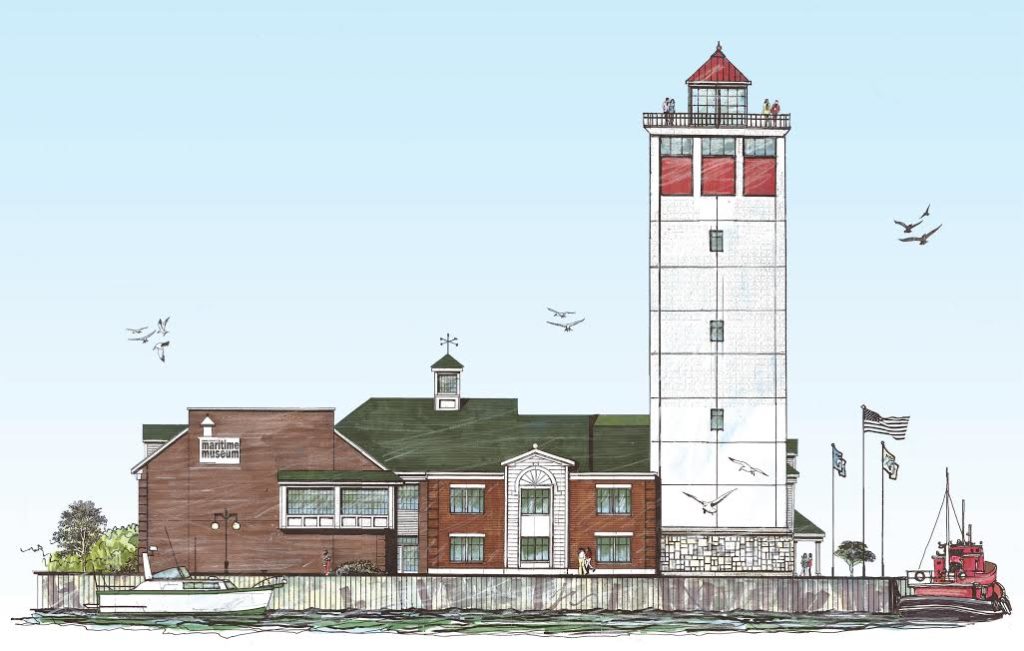 A rendering of the proposed maritime tower at Door County Maritime Museum.

In a 5-2 vote the council gave final approval to the extension of the Door County Maritime Museum’s (DCMM) lighthouse tower expansion proposal, but not before Councilwoman Kelly Catarozoli questioned whether the city has taken appropriate steps to give the museum clearance to move forward. She asked whether it was the city’s responsibility to get permission from the state to lease the land to the museum, since it sits on filled lakebed, or if that step was the museum’s responsibility.

“It appears the city should get a lease from the state and then sub-lease to the DCMM,” Catarozoli said. “I just want to make sure we have done everything properly.”

William Harder, president of the DCMM, referred to the lease as “an alleged requirement.”

“We don’t think it has a factual basis whatsoever,” he said when asked by Mayor Thad Birmingham to address the question.

But Olejniczak said it was likely such an agreement is required, but since the city relinquished ownership of the land when it quit claimed the deed to the property in 2013, he was unsure if the responsibility lied with the museum or the city.

“They don’t have exclusive use of that property the city does,” Birmingham said.

The council ultimately approved the proposal without addressing the lease question. Hauser and Catarozoli voted no.