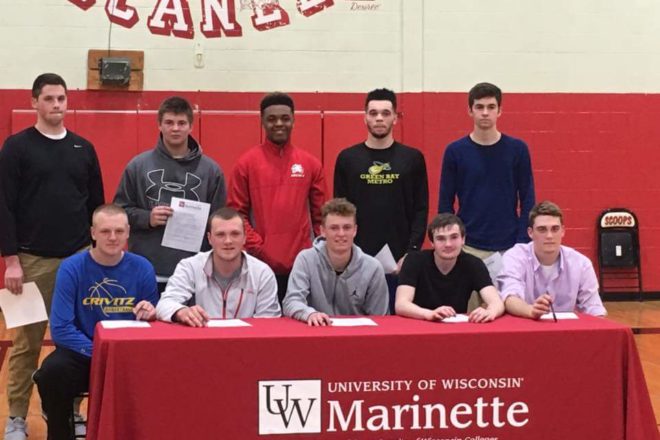 Matt Newman (top right) poses with other new basketball recruits for UW-Marinette. He signed his letter of intent on May 1, 2016. Submitted.

Newman will continue his basketball career at the University of Wisconsin-Marinette. Stoeckel will head to Lakeland College for soccer and Carlson will compete in track and field at UW-Stevens Point.

The UW-Marinette Buccaneers, who play in the Wisconsin Collegiate Conference, will welcome the 6’5” Newman to their squad that finished with an 18-8 overall record during the 2015-16 season. They finished second in the WCC East with a 9-3 conference record. The Buccaneers advanced to the WCC semi-finals where they lost to the UW-Marathon Huskies, 74-80, leaving them one game shy of the WCC State Championship.

UW-Marinette is a two-year school that plays in the WCC. The WCC schools also compete against Wisconsin technical colleges across the state. Athletes are allowed two years of eligibility in the WCC. Many of these athletes will earn their associates degrees or transfer to a four-year program.

Newman, a second-team all-conference player in his senior season, is excited about his opportunity and looks forward to continuing to play the game he loves.

“I’ve always wanted to play at a higher level and I like the team that they have,” Newman said. “I am looking forward to playing with them.”

He understands the game will become faster and more intense, but he knows he has the skills to compete.

“This summer, my goal is to get faster and stronger to help make that transition smoother,” he said. “I think I am a pretty versatile player and I play well under pressure.”

During his first two years of collegiate basketball, he hopes to make an immediate impact.

“I am hoping to develop my skills, have fun, and win games. I would like to keep going as far as I can with hopes of playing at a four-year school down the road.”

Newman has plans to major in engineering and would like to continue his schooling and playing career at UW-Platteville.

Brad Stoeckel is eager to start his collegiate soccer career with the Lakeland Muskies, a NCAA Division III program. The Muskies compete in the Northern Athletics Collegiate Conference, a conference that began in 2006 and consists of 12 private colleges and universities in Wisconsin and Illinois. The Muskies soccer program began in 1974.

The second-team all-conference Stoeckel hopes to help the Muskies, who finished the 2015 season with a 2-16 record.

“I am pretty excited to go on to play at the collegiate level. This is something I have always wanted to do. I think it will be a great opportunity to learn while becoming a better leader and soccer player.”

Stoeckel also knows that he needs to put in the time and effort to prepare himself for the next level.

“I definitely want to increase my size and brush up on my skills and learn some new ones to be ready for when we play,” he said.

“I am kind of nervous because when I have gone to college camps, I played against a lot of bigger players with a lot of talent. But I know that I’ll improve over the season as it progresses.”

Although the Muskies have struggled this past season, Stoeckel believes he can help the rebuilding program.

“I think I will bring strong communication to the team and help to build team chemistry.”

Stoeckel plans to major in pre-law with a minor in international business. 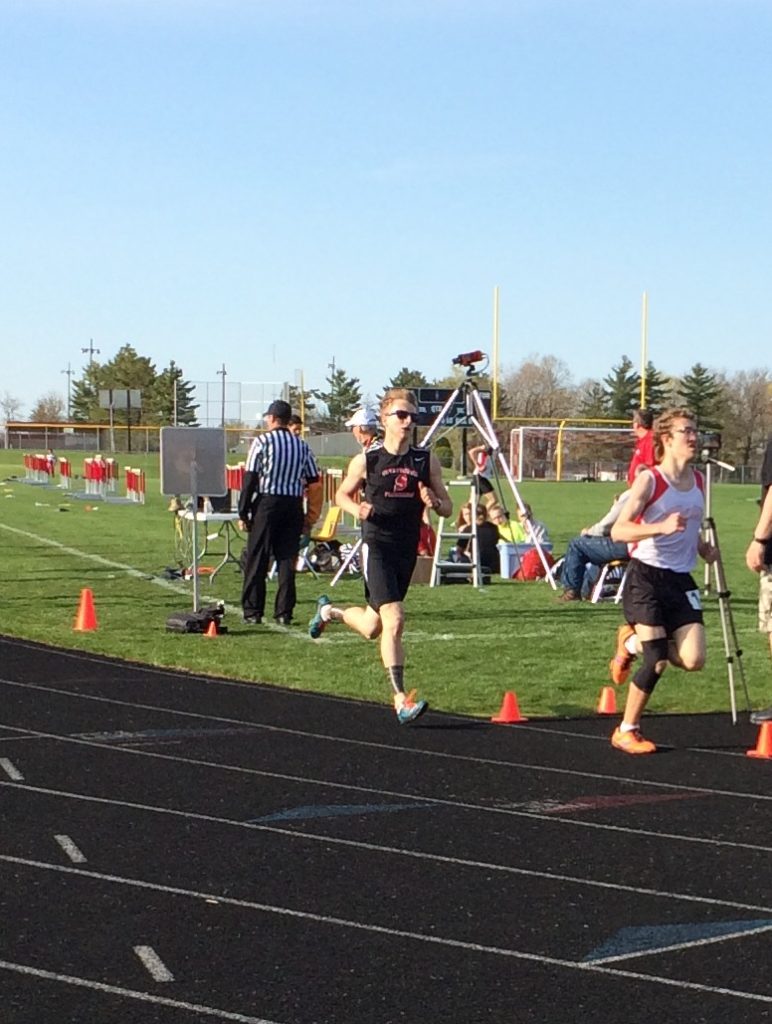 Cory Carlson will be attending UW-Stevens Point next fall to compete in track and field. Submitted.

Cory Carlson will follow in his coach’s footsteps by attending UW-Stevens Point to join the Pointers’ track and field team. Carlson’s high school coach, Chris Horvat, was an NCAA Champion and All-American at UW-Stevens Point where he was elected into the school’s hall of fame in 2010.

“I was looking for a college and it was between UW-La Crosse and UW-Stevens Point,” Carlson said. “After meeting Brett Witt, the Stevens Point coach, I felt like I would have the opportunity to run and study in a place that felt like home.”

The Pointers are a NCAA Division III school that competes in the Wisconsin Intercollegiate Athletic Conference (WIAC). The conference consists of nine Wisconsin colleges. The WIAC is one of the oldest NCAA conferences. Its beginnings date to in 1913.

Carlson has plans to push himself over the summer to prepare for the transition to the college level.

“I’ve always been ambitious with running, so competing at the collegiate level will bring new opportunities for me to excel at it,” said Carlson.

His running career began in the sixth grade, but he became serious about it during his sophomore year. He credits 2015 Sevastopol graduate and teammate Joe Bruno, as well as Coach Horvat for motivating him to compete at a high level.

“They convinced me to pursue running more competitively and they were able to get me to push myself beyond what I thought was impossible.”

Carlson will continue his offseason training this summer and throughout his freshman year of college to get ready for his first season of collegiate running.

“My biggest improvement needed is to increase my upper body strength. I feel confident in my running endurance. The upper body plays a major role in running for speed. I am hoping to compete in the mile and 800 meter,” said Carlson.

Carlson knows that running will always be an important part of his life, even after his college years.

“The biggest takeaway I get from running is it keeps me healthy, in shape, and it allows me to pursue my goals.”

Carlson will major in chemistry and has future plans to earn his master’s degree in forensic chemistry.