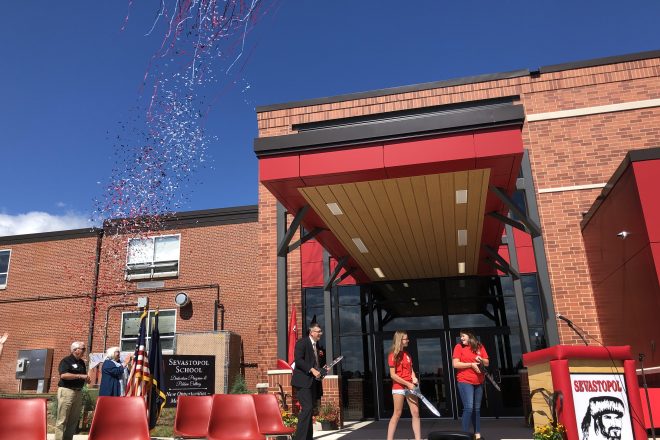 After their names were drawn to participate in the ceremony, (from right) Sevastopol freshmen Addison Schauske and Ruth Wilke, along with Superintendent Kyle Luedtke, cut a ribbon during a dedication and celebration of the $25 million renovation and addition at the school. Small cannons sent confetti into the air as the trio cut the ribbon.

A crowd of approximately 500 people filed into the new Sevastopol School addition after about 20 minutes of speeches and a quick blast from a confetti cannon.

The doors swung open to the public, and the lines of people scattered throughout the hallways to see the results of a year and a half of work.

Parts of the school previously did not meet Americans with Disabilities Act standards, such as doorways that were not wide enough for wheelchairs. The school also had a confusing collection of narrow hallways that zigzagged through a hodgepodge of additions. What’s more, it had 19 exterior entrances in the old configuration, which created a massive security challenge, as well as 19 rooflines, which guaranteed exorbitant, ongoing maintenance costs if voters had not supported the referendum in fall 2018. Sixty-two percent of voters did.

“It’s truly an honor and a privilege to be a part of a project that has this kind of community support and will provide an opportunity for each and every student going forward,” Superintendent Kyle Luedtke said before welcoming parents, students and visitors into the building.

Third-year chemistry, physical science and physics instructor Janelle Hollingshead said not only do she and her students have a larger room, but she also now has the storage and space to use different sections of the room for chemistry and physical-science classes without needing to reorganize the room between classes.

Elementary school librarian and media specialist Bridget Bowers remarked on the difference between the previous library located in a remote third-story room without windows, and the new, centrally-located, bright and inviting space.

While the 1924 portion of the school is gone, the new building project recycled some parts of the original building. The wooden handrail along the central staircase in the new addition comes from the demolished, section of the school, as do some of the bricks. Those bricks make up a “remembrance wall” with the original school cornerstone, and the wall includes a bench made from bleachers from 1965.