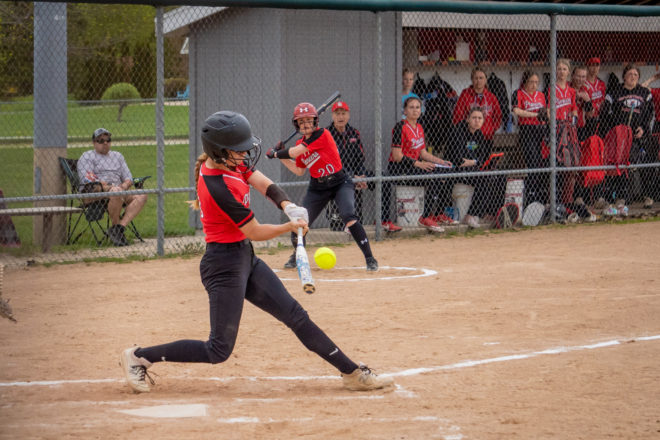 Sevastopol’s Libby Ash swings away at the plate while Naomi Rikkola (20) looks on from the on-deck circle in Monday’s home softball game against Sturgeon Bay. Photo by Rachel Lukas.

Sevastopol is the favorite in the regional round of the Division 5 WIAA softball tournament.

The Pioneers received the top seed and an opening-round bye and will open the tournament at home May 24 at 5 p.m. against eighth-seeded Pembine/Goodman. With a win the Pioneers would advance to the regional championship game May 26.

In Division 3, ninth-seeded Sturgeon Bay drew eighth-seeded Kewaunee in a game slated for Thursday, May 19, after this issue went to press. The winner advances to play May 24 at No. 1-seeded Chilton.

Sixth-seeded Southern Door received a first-round bye and is scheduled to play third-seeded Wrightstown on May 24 at 5 pm. The winner advances to the regional championship game May 26.

In Division 4, Gibraltar is seeded ninth and opened with a game May 19 against the number 8 seed Crivitz, with the winner advancing to play at 4:30 pm May 24 at top-seeded Bonduel.