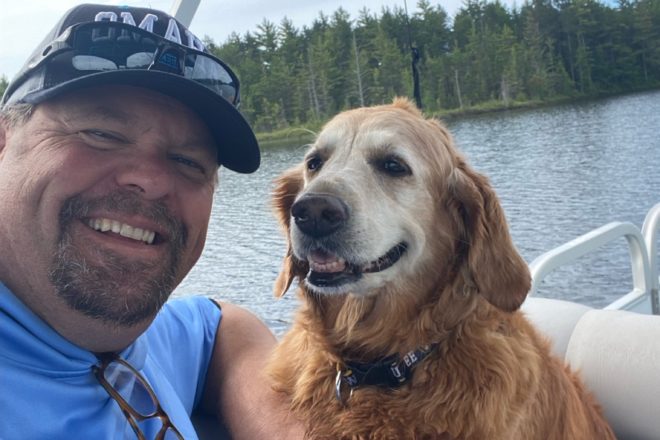 New Sevastopol middle school and high school principal Troy Schaefer relaxes on a ride with his dog, Cali. Schaefer is looking forward to getting to know students and teachers and offering his support.

Sevastopol just hired a middle school and high school principal who’s never held that title before, but Troy Schaefer is certainly not new to leadership positions.

Schaefer is ready to turn all of his attention from the ball diamond’s players to the school building’s students and teachers after a full, 24-year schedule as a teacher, coach and leadership trainer.

A few years ago, Schaefer founded his own company as an inspirational speaker for businesses and gatherings. He’s also helped to train coaches and ballplayers for the past four years as head instructor and “mental game” leader at Rhino Baseball Academy. Plus, he had a successful, 12-year career as varsity baseball coach in the Oshkosh Area School District.

Schaefer turned his focus completely to becoming a principal this year, landing 22 interviews in three weeks and choosing Sevastopol.

“I was looking to be a principal and looking for where I would be the best fit,” he said, noting he’s most excited about helping to support students and their teachers in a small school where he can be a part of their lives from sixth through 12th grades.

“What an awesome opportunity to really be invested in the development of young people – to have that many years with them,” Schaefer said. “I really want to be a great asset and servant leader to everybody here. And – God willing and God protects me and loves me and allows me to stay healthy – I would like to do this as long as I possibly can, as long as I’m effective and I’m making great change.”

Schaefer said he’s impressed with Sevastopol’s traditions of having high standards for and performance by students, and being in “an awesome community” that supports the students and school.

In addition to teaching and coaching, he’s spent the past few years talking to employees and consulting for companies, working with adults to help improve the workplace culture and help them “get the most out of your life.” He said all of those experiences have prepared him well for the demands of a principal’s position.

Schaefer said he looks forward to the challenge of being involved throughout the school and community, meeting expectations to serve students and teachers, and being present when expected to provide support and make decisions.

“When you’re dealing with different challenges, and sometimes those are stressful, you have to be able to put those things aside and stay very present focused, in the moment that you are,” Schaefer said. “Maybe you had a rough meeting with a certain group, but now you’re meeting with another teacher or a student, or you’re walking the hallways. That [stress] can’t carry you through. You have to be present and treat each situation individually and continue to be a great person.”

Sevastopol board president Lisa Bieri said the search committee liked the energy Schaefer displayed, his experience teaching and coaching boys and girls of all ages, and his track record of leadership.

He describes himself as relationship driven and a “transformational leader” who sees the principal as a “servant leader” who is at “the bottom of the flow chart” – someone whose main job is supporting students and teachers and helping them “in any way that I can to be the best version of themselves.

“You’re not going to change people; you’re just trying to find ways that you can be productive and meaningful in their life,” Schaefer said. “You have to show that you genuinely care about them. They need someone they can lean on and trust and respect.”

He said the success of the school comes from the people who are doing the work: the teachers. His role, he said, is to be the person they can rely upon and trust and have honest conversations with to help them in their career.

“The same thing with students,” Schaefer said. “Students need to know that you genuinely care about them. If you’re going to demand excellence from students, they have to know that it’s not a personal agenda, that you are invested in them, that it’s personal.”

Survey responses arrived at a more-than-satisfactory rate in June and early July as Southern Door school board members and district officials push for voter support for an operational funding referendum and contemplate a possible facilities-improvement referendum in November.

Southern Door Superintendent Chris Peterson said more than 890 district residents had returned surveys by a July 4 deadline, and that’s a response of greater than 19%. Survey experts for the School Perceptions firm told him that percentage should be enough to gauge community members’ wishes and ideas for the facilities. They also anticipate surveys continuing to arrive by mail early this month.

Peterson has outlined a wide variety of possible improvements within the school and in the agriculture and career-education areas, and he said potential priorities include more parking around the grounds and a garage for the district’s buses.

He also said that School Perceptions will provide more information after analyzing the data, but most certainly, the first priority will be passing the operational referendum to keep funding levels steady.

Peterson said the school’s first nonremedial summer school at Southern Door has gone well, with more than 200 students attending the first session and around 200 signed up for the second set of camp-like programming.

“It’s not just remedial,” Peterson said. “It’s things that maybe they don’t have the opportunity to do during the regular school year. It’s a really nice addition.”