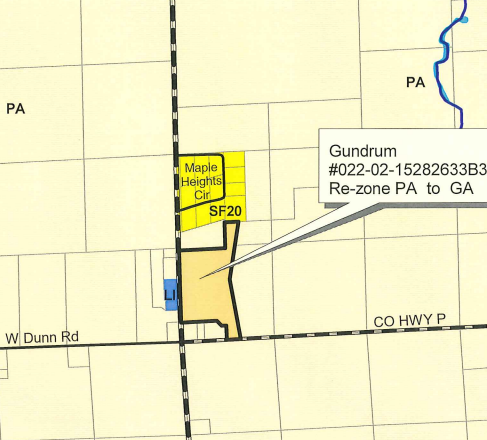 Despite a 4-0 vote for approval by its own Plan Commission, the Sevastopol Town Board on July 24 turned down a petition for a conditional use permit to establish a winery and farm market at the intersection of the County P and Highway 42.

The petition came from Andy and Karen Gundrum, who want to rezone 20.27 acres from prime agriculture to general agriculture in order to build an 11,000 square foot winery. Andy explained they already have 3,400 grape vines on six acres on the south end of the property.

But since that meeting, Staveness said the county sent letters about the project to neighbors, who began writing letters to the board and making phone calls to individual board members to register their opposition to the winery. Staveness said the letters focused on issues such as disturbing the rural character of the area, traffic issues on County P where the entrance to the winery would be, and that such a business in Sevastopol should be located in Institute or Valmy.

Seven people at the meeting spoke out against the winery, saying there are already too many wineries and too much glorification of alcohol in this family friendly county and that County P is a super highway in that part of the county and the business would likely contribute to accidents.

Former Sevastopol Town Supervisor Richard Weidman was the only person to speak in favor of the winery, saying it would be part of the viticultural growth of Door County. And this one would be – like Lautenbach’s Orchard Country Winery in Fish Creek – an estate winery, making wine from grapes grown on the property.

“All in all, there’s probably 20 or 30 people who object to this,” Staveness said.

Supervisor Tony Haen made a motion to not recommend the county grant the conditional use permit, which was seconded by Supervisor Chuck Tice.

Supervisor Linda Wait said when the issue first came to the board in June, she had no objection to “a farmers market slash selling wine,” which is why she voted for approval, but added that she was caught off guard by the scope of this project as presented. She reiterated the traffic safety concerns on County P and maintaining the rural character.

“It might be better suited in one of our hamlets, Valmy or Institute,” she said.

“The whole premise is a vineyard and winery,” Andy Gundrum said.

Town Chair Dan Woelfel called for a vote and it was a unanimous 5-0 vote against recommending awarding the conditional use permit.

Woelfel said the vote would let the county’s Resource Planning Committee (RPC) know where the town stands on the issue. “It is a change, but perhaps the correct one,” he said.

He also advised those who feel strongly about the issue to show up at the RPC meeting at 2 pm on Aug. 3.