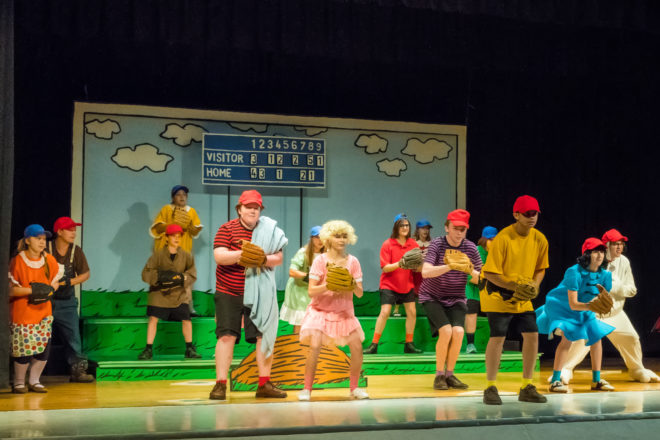 The whole ‘Peanuts’ gang gets in on a baseball game in ‘You’re A Good Man, Charlie Brown,’ on stage at Sevastopol School this weekend. Photo by Len Villano.

Based on the long-running comic strip “Peanuts,” by the late Charles M. Schulz, the musical follows a day in the life of the meek Charlie Brown (played by Manav Jandu) as he tackles school, baseball, Valentine’s Day, and kite-flying with his friends Lucy (Lizzie Fiscus), Linus (Owen Ensign-Foulds), Schroeder (Gavin Andersson), Sally (Lexie Henkel), and Snoopy (Natalie Meikle).

Joined by an ensemble including Bea Dramm as Woodstock and Patty, Abbi Hayes as Flora, Emily Bley as Theresa, Cole Albertson as Shermy, Brooklyn Brauner as Frieda, Ellie Krohn as Emily, Bailey Schroeder as Pig Pen, Georgia Neitzke as Peppermint Patty, and Sam Eskew as Marci, the cast brings the popular musical to life with songs such as “T.E.A.M.,” “Beethoven Day,” “My New Philosophy,” “Suppertime,” “Happiness,” and the title number, “You’re a Good Man, Charlie Brown.” 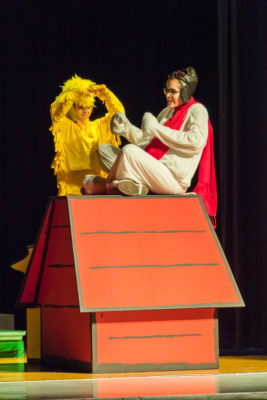 Woodstock and Snoopy, played by Bea Dramm and Natalie Meikle, hang out on their signature spot during the musical, which follows a day in the life of Charlie Brown and his friends. Photo by Len Villano.

“You’re A Good Man, Charlie Brown is a celebration of friendship and reminds us that through good and bad our friends are there when we need them,” said Ensign. “We would like the show to create a little echo in the community. When folks are faced with a choice of lashing out in anger or kindness, we hope the play will remind them to choose kindness.”

There are two versions of the musical: the original and the revised. Sevastopol School is producing the revised edition. It features an added character (Sally, played by Lexie Henkel) as well as two new songs: “My New Philosophy” and “Beethoven Day.”

“We had the talent to support the additional character and ‘Beethoven Day’ really lets the vocal and instrumental talents of Gavin Andersson (Schroeder) shine,” Ensign said.

Schroeder’s piano usually comes from the pit band with the actor on stage pretending to play, but Sevastopol’s Schroeder actually plays the toy piano built by David Foulds.

You’re A Good Man, Charlie Brown plays out on a set designed by Sevastopol art teacher Klayton Kindt. Four panels resemble a bright, blue sky with white clouds over green grass that take comic strip form with the addition of a large, white frame that encompasses the panels. When the production starts, the actors become the characters in the strip.

Given the age of “Peanuts” characters, Ensign admits some of the cast were skeptical about presenting a play that seemed too juvenile for high schoolers. But with encouragement, many took a closer look at the script and were surprised how hilarious and smart the writing was, and that the youth of Charlie Brown and his gang is what allows the audience to connect with the show’s deeper message.

“We’re able to look at them without judgment and it allows our brains and hearts to open up to really hear the philosophical messages they’re teaching us,” Ensign said. “So I think we can buy that immediately. We don’t need to actually play them as five, six and seven-year-olds.”

The original production of You’re A Good Man, Charlie Brown opened March 7, 1967 at Theatre 80 St Marks and ran for 1,597 performances with Gary Burghoff (“Radar” O’Reilly from M*A*S*H) in the title role. It received a revival on broadway in 1999, featuring Tony Award-winning performances by Kristin Chenoweth as Sally and Roger Bart as Snoopy.

Performances are Friday, Nov. 3 and Saturday, Nov. 4 at 7pm and Sunday, Nov. 5 at 2pm in the Sevastopol School gym. Tickets are $8 for adults, $6 for students, free for children 5 and younger, and can be purchased at the door.