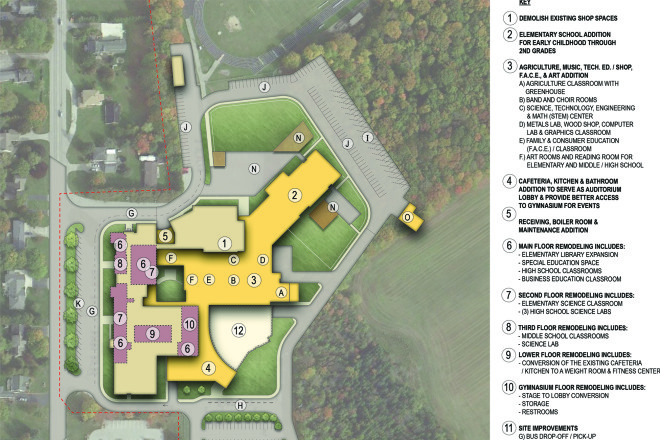 Sevastopol residents and school district staff should already have received information in their mailboxes or email inboxes about the school district’s conceptual plans for a $26.9 million school upgrade and a $6.9 million auditorium.

The information includes details on the problems of making a 91-year-old main building and its many additions work for a 21st century education, and a survey that asks if the community supports the long-term process of making the building projects happen.

“We have 19 roofs. That tells you how many additions we have,” said Sevastopol School Superintendent Linda Underwood. “Think about my roof replacement cycle for just a minute.”

She said the information sent out “gives an overview of here’s where we stand in thinking about our facilities. It asks people, here are some things we know need to be corrected or improved. Would you support this? It breaks down the whole plan into some smaller pieces and simply asks, what do you think about this? There are two purposes to the survey. One, we want to get people’s feedback on where we are going. The second one is, would you support us in our efforts to get this work done? That’s where the referendum question comes in because the only way we have to raise the money to do these kinds of improvements is through a capital referendum.”

Sevastopol last went to voters with a referendum question in the spring 2015 election when it asked for authorization to exceed the revenue limit by $1.5 million for three years for non-recurring purposes. With a concerted effort to educate the voting public, the referendum passed by a nearly 73 percent majority.

But what about what amounts to a $34 million building program? That’s why Underwood wants to generate the conversation.

“If we consider ourselves to be the center of the community, we need to share what everybody thinks,” Underwood said. “The community uses this building a lot for many different kinds of events. We need to make sure it’s right for the students and community, and that everybody’s going to be on board if we move forward.” 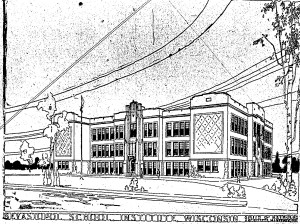 The original Collegiate Gothic-style school opened in 1924, with, Underwood points out, a gym and an auditorium. “Over time, the gym and auditorium were broken up to make more classroom spaces,” she said.

“Then in 1946,” she continued, “they built on a wing off the back of the building for what they would have called industrial arts and what we now call technology education. That piece of the building is built out of cinder block and it’s not as sturdy as we want it to be. There’s nothing we can do with it because of load-bearing walls. So part of this is demolishing that addition that was built in ’46.

“In ’65 they built the high school addition, which includes the gymnasium and that newer section on front to the south. In ’91 they did the elementary gym, band, music and some locker rooms. In 1996 they made a bigger high school media center because it wasn’t big enough when they built the high school addition. Then in ’98, the last big renovation or construction, they added two kindergarten classes, one pre-K class and one high school class. Basically they put a second floor on the front of the building. That’s it.”

Underwood tells the story of a 1980 Sevastopol graduate who recently returned to the school for the first time since her graduation to deliver something to a science class.

“She walked in and said, ‘Ohmigosh, this is exactly the same as it was when I graduated in 1980’,” Underwood said. “A lot of things in science have changed since 1980.”

She acknowledges the enormity of the vision.

“Any time you do this magnitude – this is a really big project – it’s spread across a number of years. They’ve given a dollar amount for the separate pieces. Infrastructure, science and tech education classrooms, elementary school, middle and high school, cafeteria and kitchen, site safety and traffic flow improvement. When you put all those together it comes to, rounded, $26.9 million. There’s a second question that asks about an auditorium. The auditorium is $6, 900,000.”

The survey is meant to be the first step involving the public in the process.

“This is what we’re thinking, can you give us some feedback on it?” Underwood said. “We need people to respond to the survey. Then I need folks to look at the plans and send me feedback. When we have community conversations and open houses, I really want people to attend. I want them to see what we have, see what we plan, and give us their feedback. Nobody wants to pay higher taxes, but I think when they built this original building back in 1924, they probably had the same discussion. I think we’ve done a good job of preserving the asset they built in 1924, but sometimes you have to change.”