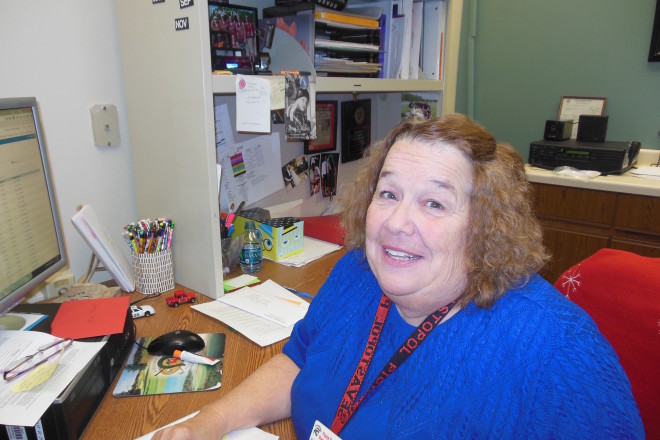 If you have attended a Sevastopol athletic event in the last decade and a half, chances are likely that you have crossed paths with Paula Symons. Whether collecting tickets on Friday nights as the boys take to the gridiron, announcing and keeping the scorebook as the Pioneer basketball teams battle it out on the court, or greeting visitors in the elementary school, Paula Symons is there with a smile.

Symons’ full-time duties as elementary school secretary, along with added roles of assistant to the athletic director and event worker, has surely made her a recognizable face of the Sevastopol School District.

“I enjoy working the many sporting events because it keeps me active and in-touch with the youth. There is nothing better than seeing children work hard and being happy doing it,” Symons said.

She is in her 17th year at Sevastopol after moving here from Upper Michigan with her family in 1999. Previously, she worked as a school paraprofessional in White Lake, Mich., a small town with a population of 474. Symons notes that the dropping enrollment at the school district motivated her and her husband to consider relocating for employment. Following a visit with her brother in Door County and a successful interview at Sevastopol, they decided to settle in Institute. It proved to be the right move when her previous school district closed down three years after her departure.

“Moving to Door County to work at Sevastopol has been a blessing and I thank Mr. (Joe) Majeski for his confidence when hiring me,” Symons said. “I definitely found my niche working for this great school district.”

Through the years, the Symons family has interwoven themselves into Sevastopol basketball.

Andy Symons, 29, and the youngest of the two sons, enjoyed a high school career on the courts for the Pioneers until his graduation in 2005. He then took on various coaching opportunities at Sevastopol, Waukesha West, and at Michigan State’s summer basketball program. Andy has served as Sevastopol’s head basketball coach since 2013.

Phil Symons, the elder brother at 36, took the role as head coach of the Sevastopol boys basketball team during Andy’s playing career and remained at the helm until 2012. He decided to step down from the program and handed the reins to his younger brother. Phil has recently found his way back to the court as the eighth grade boys basketball coach for Sevastopol.

“I have to admit that having my sons both coaching at Sevastopol can be very stressful,” Paula said. “They spend many hours helping students at Sevastopol year-round and they take great pride in what they do. They love the game!”

She credits her husband, Darrel, for introducing their boys to basketball by serving as a youth basketball coach in White Pine, Mich. She remembers her sons making countless trips to the gym to practice and finding a passion for basketball at a young age.

“Paula is the cornerstone of the Athletic Department…she willingly contributes behind the scenes to make these events happen. She is also very passionate about every student she interacts with,” Wiesner said.

“She is the Sevastopol angel – there for every family and child,” Donaldson said. “Paula lives by the quote, ‘We make a living by what we get, but we make a life by what we give.’”

Symons certainly understands the value of the younger generations in a community and also what it means to give.

“Youth gives life to a community…don’t ever forget this and always give back. The rewards are endless.”