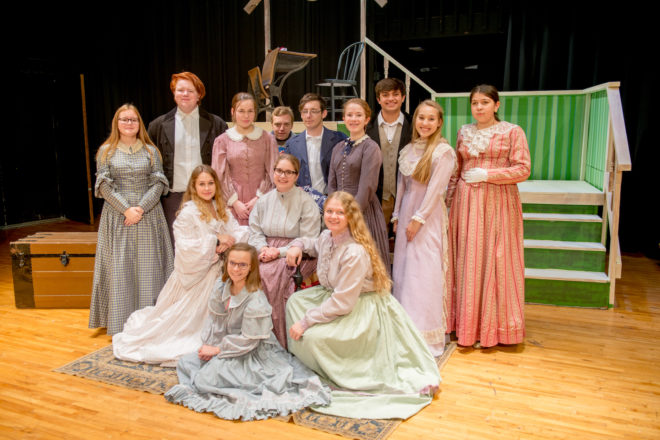 Students at Sevastopol High School will step back in time to the Civil War era when they bring Little Women to the stage Nov. 1-3.

Originally published as a two-volume book by Louisa May Alcott in 1868 and 1869, Little Women is a classic tale of the four March sisters – Meg, Jo, Beth and Amy – and their passage from childhood to adulthood. The sisters live with their mother in Massachusetts in “genteel poverty” because their father lost all of their money attempting to help friends pay off debts and now is away at war, serving as a Union Army chaplain. The elder sisters help their mother by working to bring in money, and through life’s trials and tribulations, the four sisters grow into their own selves, learning many lessons along the way.

Although today’s students are far removed from the context of the original story, director Amy Ensign sees the connections to modern times.

“The original story was one of the first times [when] a young woman’s struggle to balance the cultural constraints of the time with her own hopes and dreams was chronicled, and it is remarkable to note how relevant the story is today,” Ensign said. “I thought it would be nice to reintroduce this wonderful story to a modern audience.”

Ensign saw the connections between then and now, but her students struggled to identify with simpler times: Playing dress-up, putting on skits and receiving letters were entertaining treats for the March sisters; these days, entertainments are much different, and quick and easy connections among people relieve much of the tension experienced by people of an earlier time.

The students had a rare opportunity to work on their skills and character portrayals when Sturgeon Bay playwright Paulette Laufer visited during a rehearsal. Laufer adapted Alcott’s work to create this stage production of Little Women while she served as the theater manager of the John F. Kennedy Center for Performing Arts in Washington, D.C., from 1980 to 2015. During the rehearsal when Laufer visited, she watched the students practice, discussed being a playwright and helped to adjust the script for their particular production.

“When she saw that we wanted to put an intermission into the piece, she added a line at the end of [what is now part one] to help put a button on the act,” Ensign said. Laufer plans to attend one more rehearsal before joining the audience on opening night.

Little Women features senior Breanna Jacobs as Jo, sophomore Lilly Turner as Meg, junior Lexie Henkel as Beth, eighth-grader Bea Dramm as young Amy and sophomore Ellie Krohn as adult Amy. Although this is technically a high school production, Ensign enjoys including younger students to round out the cast – with one playing a lead role this year.

These younger students aren’t intended to be just background players, however. By incorporating them, Ensign is introducing the joys of theater participation to students at a younger age and getting them excited about high school theater.

“I would like Sevastopol School students, staff and community to come together in celebrating the story of Little Women,” Ensign said. “What do you want to be when you grow up? What do you want your life to look like? Who do you want to be a part of it? And, how do the answers to these questions mesh with your family, friends and the world around you? I hope that our audiences will leave the Sevastopol gymnatorium with warmth in their hearts while contemplating their own paths and looking toward the future.”

Don’t miss Little Women when it’s performed in the Sevastopol elementary school gym Nov. 1 and 2 at 7 pm, and Nov. 3 at 2 pm.