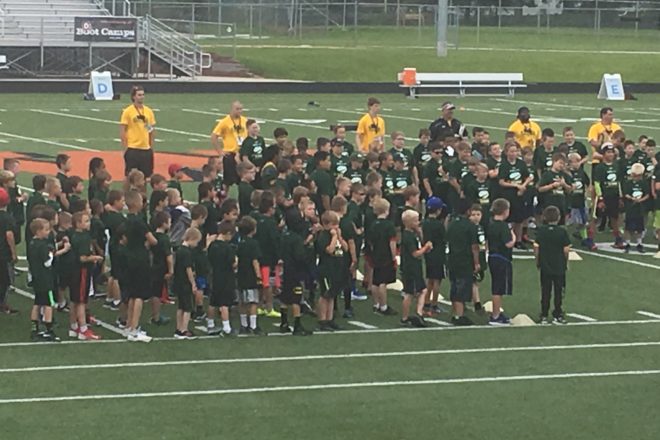 “I really wanted to have a camp here in Green Bay for a while. I just love being out here with the kids. It makes me feel like a kid,” Cobb said.

Cobb, a second-round draft pick for the Packers in 2011, prepares to enter his sixth season with the team this fall. His performance as a wide receiver and return specialist have earned him several honors, including earning a spot on the all-rookie team in 2011, leading the NFL in all-purpose yards in 2012, and being selected to the 2014 Pro Bowl. Many fans may recall his 108-yard kick return against the New Orleans Saints in the 2011 season opener; that particular play was voted as the 2011 NFL Play of the Year.

I was one of 18 camp coaches along with Cobb who worked with the 200 youth athletes in attendance. I had previously coached with ProCamps during the John Kuhn event in 2014. Three of the athletes in attendance were Sevastopol students. Second-grader Jaxon Rankin, third-grader Colton Blackley, and eighth-grader Logan Beyer all took part in the two-day camp.

Rankin enjoyed the camp, particularly playing wide receiver and learning how to run a hook route.

“It was a lot of fun,” Rankin said. “Randall was a nice guy and very funny.” 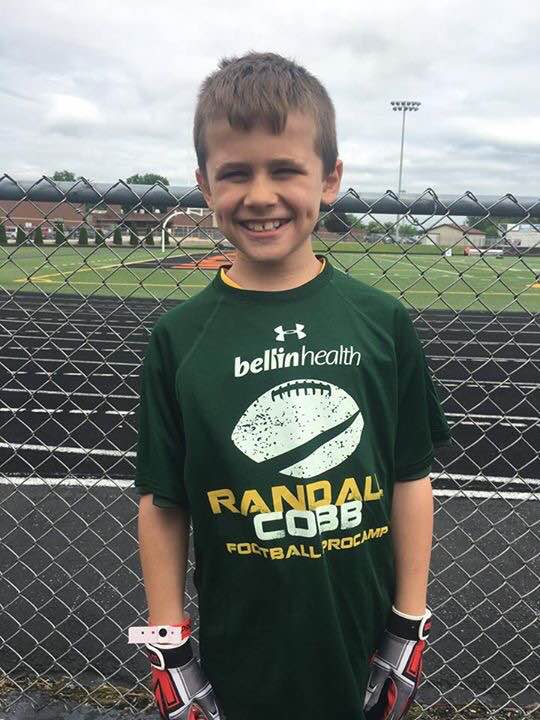 Colton Blackley, 8, was one of three Sevastopol students to attend the Randall Cobb ProCamp in June. Submitted.

Blackley also learned some receiving tips during the camp.

“I learned that I always need to keep moving and be looking for a pass,” he said.

Camp participants were awarded a bonus as another Green Bay Packer made a surprise visit on the first day of the camp to join in on the football activities. Packers quarterback Marquise Williams, who was signed by the team in May, previously spent time on the Minnesota Vikings practice squad in 2015 following his collegiate career at the University of North Carolina.

Throughout the two-day camp, youth athletes had the opportunity to experience a variety of stations designed to enhance player skills and knowledge of football. The athletes were placed in groups of 10-12 players of similar ages and assigned a coach. Each group was placed in one of three divisions.

Along with learning football fundamentals, players had the chance to compete with their squads against other teams in their division in a series of touch football games. Both Cobb and Williams joined in on several of the games.

“This was my fourth time doing this camp and it has been an absolute blast every time” Beyer said. “This year I was lucky to catch a touchdown pass from Cobb. I also won the championship with my team for the second year straight.”

Players also took part in the 40-yard dash against Cobb and several campers received awards such as “Camp-ion of the Day” and “Teammate Award.”

Along with the awards and mementos handed out, all participants received Randall Cobb t-shirts, an autographed photo of Cobb, and a personalized photo alongside Cobb.

Beyer was one of the nominees for “Camp-ion of the Day.”

“I was honored by being a nominee for the camper of the day,” Beyer said. “This is earned by having great leadership, good sportsmanship, and being a good teammate.”

Blackley was overjoyed when he had the opportunity to take a photo with Cobb.

“It felt like a dream come true,” Blackley said. “In my team picture I got to sit right next to him and he even put his arm around me!”

Cobb acknowledged his goals for the athletes at the camp.

“At this age, it’s not about figuring out who’s going to be the next top athlete. It’s all about enjoying yourself and having fun while being with your friends,” he said. “We talked about teamwork and being cooperative with your teammates and coaches while being coachable. That’s the biggest thing for us.”

“It is incredible that big-time people take the time to do things like this for kids all around the country,” Beyer said. “It is a ton of fun and a great experience I will never forget.”

Blackley enjoyed the experience and is already looking forward to his next ProCamps event. “It was really fun,” the third grader said. “I can’t wait to do it again next year!”