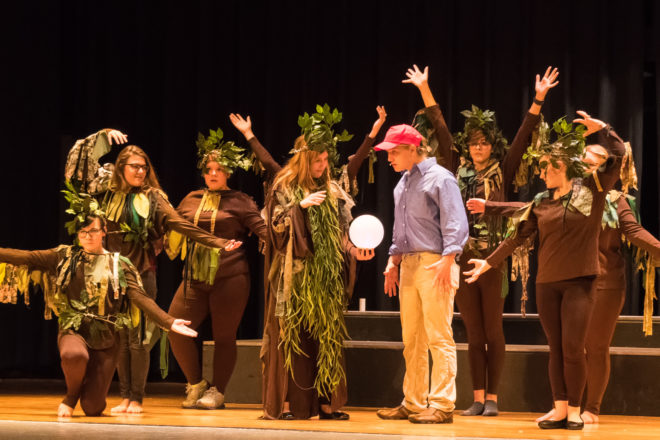 The mythical world of witches, giants and mermaids comes to life on the stage of Sevastopol School this weekend with the production of the musical, Big Fish.

Based on Daniel Wallace’s 1998 novel Big Fish: A Novel of Mythic Proportions (and the 2003 cinematic version directed by Tim Burton), the story explores the relationship between an adult son (Will) and his travelling salesman father (Edward), whose larger-than-life stories have always been a source of tension between the two. When Edward’s mortality comes into sharp focus and Will learns he will soon have a son of his own, the rational young man begins exploring the tall tales his father spun in an effort to find out his true life story. 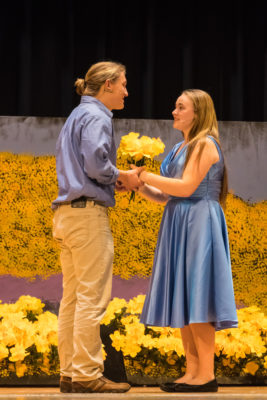 The story shifts between two timelines – the present day and Edward’s storybook past as an aging teenager who encounters a witch, a giant, a mermaid and the love of his life, Sandra. These stories come together as Will discovers a secret his father never revealed.

More than 50 Sevastopol students in grades three through 12 star in the production, along with several more on technical crew. A minimal set serves as the backdrop for the emotional and engaging production that includes more than a dozen musical numbers whose titles – “Be the Hero,” “I Don’t Need A Roof,” and “Fight the Dragons,” among them – give a hint as to the imaginative nature of the show.

For those who have read the book and/or seen the movie, director Amy Ensign is certain a new and more participatory experience awaits in the theater space of Sevastopol.

“As an audience member, you feel like a participant in the piece rather than an observer of a movie or just engaging your eyes and brain while you’re reading the book,” she said. “The musical in a live theater is going to engage all of your senses in a very palpable way so I think live theater is just a more sensory experience. You’re also sitting next to your neighbors in the community, other students from the school, teachers from the school, so it’s also a shared experience that all of you in that space will be the only people to have experienced it in that moment. Even the very next day, it’s going to be a little bit different.”