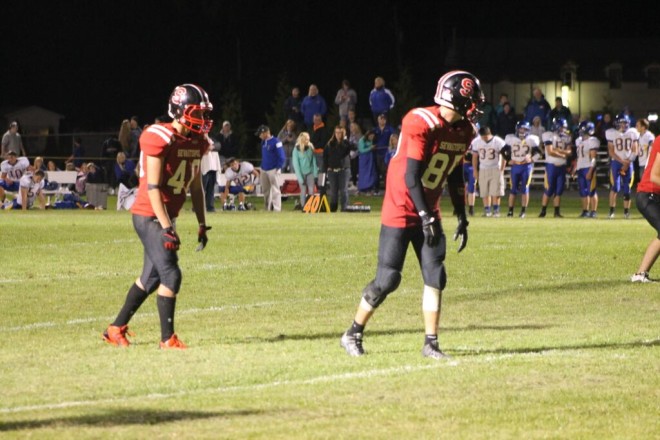 Quin Schram and Dylon Iverson will head to UW-Stevens Point this fall to become part of their football program. Submitted.

Sevastopol High School seniors Dylon Iverson and Quin Schram will both continue their football careers at the collegiate level after signing letters of intent to commit to play for the University of Wisconsin-Stevens Point Pointers.

I had the privilege of coaching these two young men the last three years and I am incredibly proud of their accomplishments. I am confident they will both continue to have success at the next level.

Iverson, a standout tight end and linebacker, is the son of Scott and Lisa Iverson. Dylon will look to make an immediate impact this fall and is excited for the upcoming challenge.

“I am kind of nervous to see how it will be, but I am looking forward to continuing to play the game I love,” Iverson said.

Schram, a multi-threat player on offense, defense and special teams, will take a different route in beginning his collegiate football career. Schram, the son of Brian and Tina Schram, will “grey shirt” in his first year with the Pointers. To “grey shirt” means that he will officially join the team in January and retain his first year of eligibility, which will begin in the 2017 season.

“I am excited to meet new teammates and enjoy a new experience. Grey shirting will give me the chance to put in additional work in the weight room to prepare for the next season.”

Both Iverson and Schram, who spent three of their four years playing eight-player football, were instrumental in the recent success of the Pioneers as the team finished the season with a 7-2 regular season record and their first-time berth to the WIAA Jamboree.

Iverson and Schram accumulated several accolades for their performance on the field. Iverson led the state in receptions with 46 catches in his senior year along with 11 touchdowns and 19 two-point conversions in that year. He finished his career with 1,000 yards receiving. Schram rushed for 1,126 yards in his senior year while accumulating 2,306 yards rushing and 1,391 yards receiving in his high school career. He finished his career with 55 total touchdowns along with 12 two-point conversions for a total of 354 points in three years.

Iverson was selected as first team tight end for the Great 8 North Conference in 2015. He also earned second-team all-conference honors as linebacker in each of his three seasons between 2013-15. Iverson was an honorable mention tight end in 2014 and was selected as the team’s Defensive Player of the Year in 2013 and 2014 as well as the team’s Offensive Player of the Year in 2015.

“The awards meant a lot because I knew the work I put in was paying off and it motivated me to continue to push myself.”

Schram earned all-state honorable mention in the eight-player division. Additionally, he was a first team all-conference selection in the Great 8 North Conference in 2014 (WR) and 2015 (RB and DB) while earning honorable mention in 2013 (WR) and 2014 (DB). He received the team MVP award in 2014 and 2015 while earning the team’s Offensive Player of the Year award in 2013.

“It showed that my hard work was paying off and through the difficult times, I was able to persevere and improve myself to be the player that I am today.”

Both Iverson and Schram will transition back to the traditional 11-man game. Iverson intends to major in criminal justice while Schram will pursue a degree in athletic training.

Iverson admits that although he is excited to become a Pointer, he will miss his time as a Pioneer.

“I am going to miss the team chemistry that we had, especially with my senior teammates. The coaches helped to prepare me for the next level and I am eager to showcase my skills to my new coaching staff,” Iverson said.

“I am going to miss the coaching staff the most. I have known them before I even started playing football. I created a special bond with the coaches that I will never forget,” Schram said.