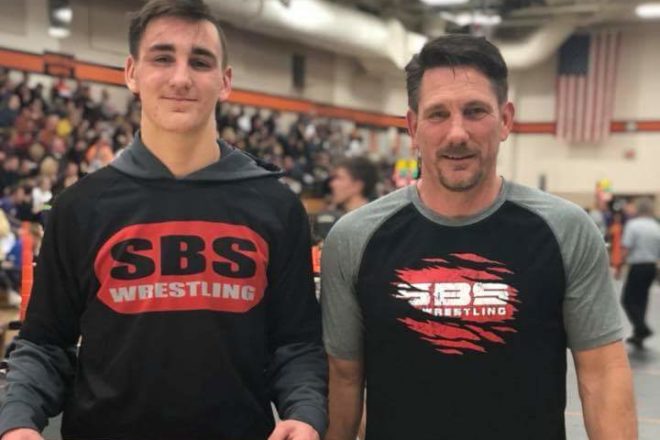 Sevastopol’s Jeremy Jorns took first place in sectionals at Oconto Falls to earn a trip to the state wrestling tournament. His father, Jeff Jorns, was a 1985 state qualifier in wrestling. Submitted.

Sevastopol High School junior Jeremy Jorns has become the first wrestler from Sevastopol in more than a decade to earn a trip to the state wrestling tournament.

Jorns (44-4) will represent the Sturgeon Bay/Sevastopol wrestling co-op as an individual in the Division 2, 182-pound weight class at the 75th Annual Individual Wrestling State Tournament to be held Feb. 22-24 at the Kohl Center in Madison.

“I’m excited,” Jorns said. “A bit nervous, but mostly excited. I wrestled since I was a little kid and I made it to state in the 8th grade, but never thought it would happen at this level.”

He has never wrestled Flanagan or Henschel in the past, but he will be in attendance for their opening match.

“I haven’t wrestled any of them yet, so we will be scouting them to see what they do,” Jorns said. “We see what they do on their feet, what their main move is, and what kind of escapes and rides that they do.”

Jorns earned his way to state with a first-round bye after placing first in the sectional tournament at Oconto Falls after defeating Marinette’s Sean Holk (37-4) in the final match.

As of Feb. 20, Jorns is ranked 4th in the state in the D2, 182-pound class according to WIWrestling.com. He is the first Sevastopol wrestler to earn a trip to state since Derek Flok did so in 2007.

“I feel like it’s a good accomplishment, but I’ve got to keep improving here and follow in my Dad’s footsteps,” Jorns said.

Making his recent accomplishment even more meaningful, Jorns will make the trip on Thursday with his father, Jeff Jorns, a 1986 graduate of Sevastopol who placed 4th at the state wrestling tournament in 1985.

“It’s pretty cool to think about, but my goal is to beat him and get above 4th,” Jorns said. “I’ve always looked up to him.”

The father-son duo, with 33 years between their state tournament appearances, will be further bonded by this experience.

“It means a lot to me,” Jeff said in response to his son qualifying for state. “At the beginning of the year, he wasn’t sure if he wanted to go out for wrestling. Once he started seeing some success, he stepped it up and became a leader on the team. Hopefully he can continue this run at the state tournament and place down there.”

Having been in his shoes, Jeff offered advice for his son. “I’ve been basically telling him that it’s just another match and to do what you’ve been doing all year,” he said. “He’s been pretty relaxed. He stays calm and does good things out there.”

Sevastopol gave Jorns a send-off on Thursday morning before he made the trip to Madison.

Regardless of the outcome of the state tournament, Jorns has accomplished a great deal in his junior season, winning more than 90 percent of his matches.