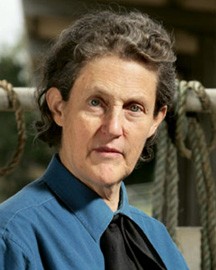 • Can an autistic child learn to become relatively normal? Take the case of the little girl who was born autistic. She did not speak until she was three and a half years old and was withdrawn and had a “flat,” unemotional personality. She was very sensitive to touch, sound and other sensations, and spent time spinning around and flapping her arms. In school she struggled, but she obtained a doctorate degree and is now a professor at Colorado State University and known worldwide as a leading authority on the humane handling of animals. Her name is Temple Grandin. She is an animal scientist, writer and lecturer, and an advocate for giving autistic children an opportunity. Through mentoring and behavioral therapy, many of them can become independent and “high functioning,” but much depends on the severity of the person’s behavioral disability. (Treffert, D.A., 2010, “Islands of Genius,” Jessica Kingsley, Pub., Philadelphia; templegrandin.com)

• Physical therapy should begin as soon as possible after a person has a stroke that damages a part of the brain controlling movement. Studies are showing that brain regions adjacent to where the damage is done can take over for the lost nerve cells and “rewire” the movement pathway. In many cases movement can be restored to a nearly normal level. (Brain in the News, Feb., 2013)

• Are the Monarch Butterflies in trouble? A survey in 2012 of their protected winter habitat in Mexico found that the butterflies occupied 59 percent less land than the previous year. In 1997 they occupied about 45 acres of habitat – in 2012 their habitat was down to three acres. The diminishing Monarch population appears to be caused by loss of milkweed plants, on which the larvae feed, and climate fluctuations, including freezing temperatures and heavy rainfall. Also, farmers do not like milkweed plants competing with their crops (especially soybeans), and herbicides have been used to kill off the milkweed. One way to lend a hand to Monarchs is to plant milkweed seeds or plants in Door County. (nationalgeographic.com, March 18, 2013; monarchwatch.org; Kingsolver, Barbara, 2012, Flight Behavior, Harper Collins, NY; milkweed seeds and small plants can be obtained from livemonarch.com)

• One of the strangest animals ever to live in America was the giant ground sloth, which should not be confused with the three-toed sloths of Central and South America. Eremotherium eomigrans arrived on our continent about 2.2 million years ago, and the last of the giant sloths went extinct about 10,000 years ago. The giant sloth was furry, nocturnal, had an ugly face, and long claws. Its teeth were small and blunt and, fortunately, it was a strict herbivore that browsed on trees and shrubs. These ponderous, slow-moving mammals were hunted by early Paleo-Indians, in spite of the fact that they weighed up to five tons and, when standing on their hind legs, reached 17 ft. in height. During daytime they lived in caves if available, and foraged at night. Other than man, who killed them with spears and lances, they had few predators, for their long claws were formidable weapons of self-defense. (bbc.co.uk; other sources)