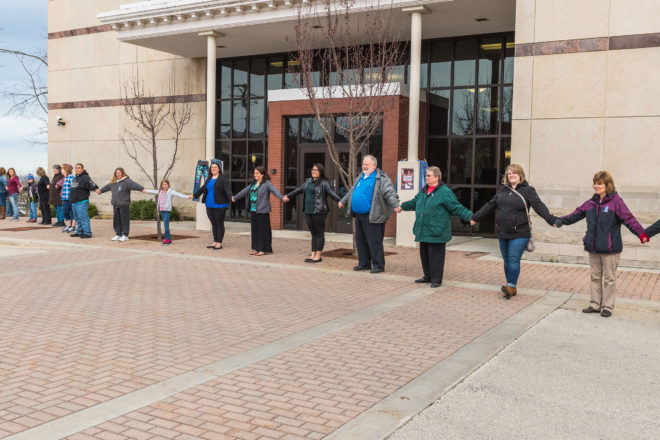 Samantha from the Violence Intervention Project, INC. helped lead “Hands Around the Courthouse” at the Kewaunee County Courthouse, Wednesday April 12, 2017. The purpose is to draw recognition to the fact that VIP provided services to 49 individuals in Kewaunee County, including men, women and children, as a result of sexual assault in 2016. Photo by Len Villano.

Nearly 50 people gathered at the Kewaunee County Courthouse in Kewaunee on the cold afternoon of April 12 to take a stand against child abuse and sexual assault. The event, called Hands Around the Courthouse, was organized by the Kewaunee County Dept. of Human Services and its Violence Intervention Project (VIP). The event was held to call attention to the fact that VIP provided services to 49 individuals as a result of sexual assault in 2016, and 79 reports of children who were victims of abuse or neglect in the county. Photo by Len Villano.