One of the most easily recognized delicious mushrooms will begin to spring up overnight and decorate the roadsides and lawns as if by magic, but only after we receive the first killing frost. A favorite name of this widespread fungus in England is “Lawyer’s Wig.” Here it is known as the Shaggy Mane. 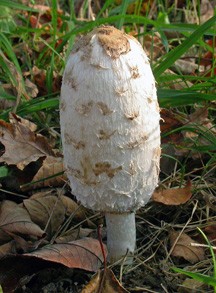 A single Shaggy Mane shows the fibrous coating on its cap.

The mycologists, those who seriously study mushrooms, would call it Coprinus comatus (co-PRY-nus co-MAY-tus). Coprinus is from a Greek word meaning dung, called this because many in this group are found growing on manure piles or on richly manured ground. Comatus is from coma, which means hair. Both scientific and common names refer to the shaggy scales that cover this mushroom’s cap.

“Shaggies” are very fast growers. They may appear as little light-colored buttons one morning, have perfectly developed two- to seven-inch white closed “parasols’ by the next morning, and will have turned into a black inky mess later that same day. The entire process might be completed in 48 hours. My wife, a very skilled mycologist, wrote a neat poem about these favorite edibles: “Shaggy manes are really strange, they spring up white overnight, then deliquesce into such a mess.” (The term deliquesce means to liquefy.)

This fascinating plant could serve as an outstanding example of mushroom power. Stories tell of them pushing small blocks of concrete sidewalks an inch or two upward. They are known to have ruined some tennis courts. We’ve seen them push their way through several inches of blacktop with no apparent damage to the outwardly delicate caps.

Usually the tip of this mushroom will be a tan color and consist of a remnant of the universal veil, a thin membrane that completely surrounded the small, undeveloped plant when it was still underground. The cuticle, or outer skin, becomes torn into scales as the fungus grows. These scales are sometimes pure white or may be tinged with tan or black.

These five Shaggy Manes are deliquescing as the spores are carried away in the black liquid.

The outer flesh of the cap is so thin that one can clearly see the vertical lines of the closely packed gills. In fact, the cap consists mostly of gills. They are broad, white at first, pinkish, then black, finally melting into a slimy fluid.

Its stem extends up through the encircling gills nearly to the top of the cap. Flanges at the edges of the gills keep them somewhat part. The stem is occasionally 10 inches long, white, hollow, and has a movable ring. It tapers from the top to the bulbous base and is easily removed from the cap.

As Charlotte’s poem indicated, the mushroom is said to deliquesce as it changes from a snowy white to an inky black. The spores contain an oxidizing enzyme, which gives the dark color to the liquid. This eventually produces a horrible putrescence, an extreme opposite to the delicate flavor of the cooked Shaggy Manes. The black fluid settles onto the ground, thereby disseminating the spores, which eventually will be spread by ground water.

We pick only the perfectly white specimens while discarding any that show even the slightest trace of darkening at the base of the long cap. They are cut cleanly with a sharp knife above the ground while attempting to keep them free of all soil.

The sooner you can get them home, cooked and consumed the better. It is best to not store Shaggy Manes overnight in the refrigerator. They will turn black if not cooked. They are cut lengthwise into halves, washed under running water (not soaked!), drained on paper towel and sautéed in butter over moderate, then low heat for five to 10 minutes. They are delicious served on crisp buttered toast or soda crackers.

Our favorite mushroom book, Mushrooms Demystified by David Arora, tells us that, “The flavor is very delicate but the texture is marvelous – not slimy as in okra but succulent as in octopus.” 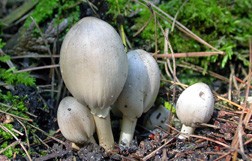 This is a group of Smooth Ink Caps, Coprinus atramentarius.

A close relative, the Smooth Inky Cap, Coprinus atramentarius, is also very delectable. Extreme caution must be taken, however, in not consuming any alcohol within 72 hours before or after eating these mushrooms. Here is what might happen: you may experience hot flushing of the face and neck, a metallic taste in the mouth, tingling of arms and legs, pounding and rapid heartbeat, a sense of swelling in the hands, and finally severe nausea and vomiting. A combination of Shaggy Manes and alcohol will not produce these effects.

In the case that you have discovered a fairy ring of Shaggy Manes you have found a treasure. At least 100 species of mushrooms are known to produce these unusual formations. They were thought by people of centuries ago to have been made by dancing fairies at night. Years later an equally erroneous explanation placed the exact cause of fairy rings on bolts of lightning.

Here is what really happens. Go into a woods, turn over an old well-rotted log and you may see hundreds of wispy, whitish, threadlike strands of material. This is the spawn or mycelium (my-SEE-lee-um) of a fungus, the plant proper. The mushrooms that appear above the ground can be compared to apples on a tree. Eventually the area around which the spore alighted and developed into mycelium becomes exhausted of available nutrients. The mycelium in this area dies as other strands expand outward in their quest for food. Eventually a ring of mycelium develops and, when conditions are perfect, presto, a magical fairy ring of mushrooms appears.

Personally the magical ring as far as we are concerned, when mushrooms are involved, is the frying pan in which they are prepared. Really, there’s nothing like a little “Shaggy Mania” now and then!