Actors don’t dream in gradual arcs. Who does? Accountants maybe? Hollywood is the land of youth and big breaks, of all or nothing.

But Tony Shalhoub has been defying standard Hollywood convention for 30 years. 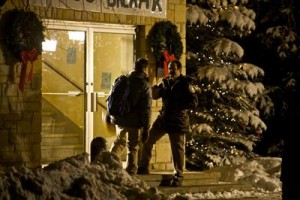 Tony Shalhoub in a scene at the Sister Bay Village Hall.

In a break from shooting the independent film Feed the Fish in Sister Bay in late February, Shalhoub hides behind a thick bush of a mustache and speaks thoughtfully about a career borne of persistence. The Green Bay-raised actor spent over a decade in theater before breaking into television, and as a snowstorm pounded the balcony of a Sister Bay hotel room, he reflects on his path to celebrity.

“It can be difficult,” he says, speaking of his early days in the theater in New York. “I was fortunate I worked fairly steadily. At that time I was single and had no children, so my needs were a lot more simple. After grad school I was able to work as an actor without having to do other jobs. I considered myself pretty successful, even though I wasn’t getting rich.”

His goals were modest, more at home on the assembly line than the realm of aspiring actors.

“When I first thought about becoming an actor, my goal was not to gain celebrity or become a millionaire,” he says. “My priority was to work and have longevity in the business and to keep growing as an actor, to work with people I respected, and work on material I could be proud of and not sell out…too much.”

That outlook guided him through those early years on stage and, eventually, to a prominent role as cabbie Antonio Scarpacci on Wings, the 1990s NBC comedy that aired for eight seasons. From that memorable character Shalhoub moved to surprising success in his star turn as the eccentric detective Adrian Monk on Monk, for which he’s won a Golden Globe and three Emmys and received seven other nominations.

Playing unorthodox characters, whether on stage or film, was not an accident. 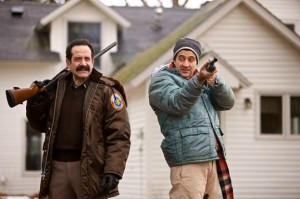 Shalhoub is not stranger to the film’s location. His family has strong Door County ties, having spent summers here growing up and returning regularly ever since. The “long and close connection” he feels with the peninsula shows when he talks about shooting here.

“It’s been a great place and remains relatively unspoiled,” he says. “For the 50-odd years I’ve been coming here, even though it’s seen lots of development and growth, by and large it’s been the right kind. Of course we want to continue that. We want people to enjoy it and draw from it, but not forget what it’s about.”

Spoken like a true local, which his character in the movie is. Shalhoub plays a gruff local sheriff whose daughter becomes involved with a Californian out to rediscover himself in the isolated Wisconsin north woods.

“My character is one who loves this area and is kind of overly protective of it,” he explains. Sound familiar? “He is sort of suspicious of outsiders and doesn’t have a lot of respect for people who would jump in the cold water, doesn’t quite understand the mentality there.”

On Feed the Fish Shalhoub is working with his nephew, writer and director Mike Matzdorff. It’s not the first time Shalhoub has done a film with family. In 2002 he directed Made Up, a film starring his wife, actress Brooke Adams, and written by his sister-in-law Lynne Adams.

“We have a very close-knit family,” he says. “It’s not without its struggles and conflicts like all families have, but I like to think we have a shared sensibility, a common taste, and sense of humor – and that helps a lot.”

He says the family aspect makes the production less competitive.

“People tend to leave their egos at the door, which isn’t necessarily true when you’re not working with family.”

Shalhoub is the family’s industry veteran, which could create a difficult dynamic with Matzdorff, who is directing his first full-length feature after working nearly two decades as a film editor. But Shalhoub said it’s not very difficult to slip into a subordinate role.

“It’s kind of an exercise in trust,” he says. “If I think of something or see something, I feel like I can voice my opinion without stepping on someone’s toes. Mike’s the director; Mike’s the writer. He’s the one with the original vision. I want to help realize that. I don’t want to impose my vision. On the other hand, if I think of something that I think works and is consistent with what I think he wants I’m gonna speak up.”

And though he relishes the opportunity to work with family and work in Door County, his involvement started with respect for the project.

“I like the idea that we can take advantage of and use this area we’re familiar with and we can kind of show it off in a way that maybe people haven’t seen before, especially in the winter.

The movie’s theme strikes a personal tone for Shalhoub.

“This place has always been a place that we’ve come back to over the years,” he says. “I’ve lived a lot of different places – New York, L.A, Boston. But somehow, coming back here and having our reunions here and having access to that water that we so loved when we were growing up, you become sort of replenished or revived by it. All of this other craziness and stress can happen out in the world, and you can come back here and be sort of rejuvenated. And that’s sort of what’s at the core of this movie as well.

“This outsider comes here and his life is in shambles. He comes here and he rediscovers himself and gets in touch again with what’s important to him. That’s something that Michael was trying to billboard in the story – that this can be a place of rejuvenation.”

For once, Hollywood’s take isn’t so different than reality.