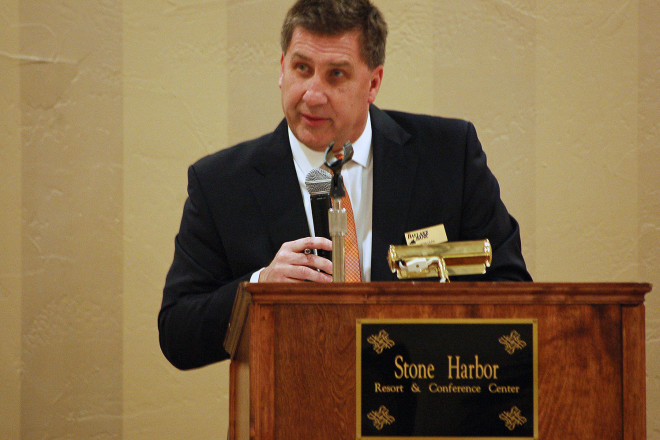 The companies have set a closing date of April 29, 2016, for the $140 million deal, at which point, Baylake’s systems and signs will change to the Nicolet brand.

“We are pleased that the shareholders of each bank have approved the merger,” said Nicolet chair and CEO Bob Atwell in a news release. “We are ready to show the communities we serve what ‘Better Together’ means.”

At the Baylake stockholders meeting, Cera gave an overview of his almost 10-year tenure with the bank.

“I’ve stood on this podium nine different times before this year and have had the chance to speak to you as shareholders during that tenure,” he said. “When I first joined the bank in [August] 2006, I came to the bank with a very clear directive from our board, which was really to talk about how we would grow the bank, how we would grow our management team and how we would prepare ourselves for organic merger and acquisition opportunities in the future.”

But those best intentions for the growth of the bank were thwarted by factors beyond anyone’s control.

“We had to work through a number of problems during the era of 2008 through 2012,” Cera said. “Then the Great Recession hit us and that really set us back in a lot of different ways. Regulators presented us with a formal agreement in 2010 which restricted what we could do as a bank. Our stock price in 2009 fell to an all-time low of $2 a share and our market cap for the bank at that time was less than $15 million. It was probably the most difficult and challenging time the bank had since the 1930s.”

Those challenges forced the bank to refocus.

“We embarked on a strategy to rebuild the bank, to do things differently than what we had done historically. It took time, it took patience from our investors, from our shareholders, our board of directors, our employees, our customers and the community, to put the bank back together in a way that would eventually allow us to grow and thrive.”

Cera said Baylake developed a new strategic plan that would grow the bank to $1.75 billion on a five-year time frame.

“Subsequently in 2014 we acquired a bank in Appleton from Community Bank and Trust and that was our first entrée into the Fox Valley,” he said. “Here more recently, in December of 2015, we completed our acquisition of Union Bank in Kewaunee and we felt very good about the progress we continued to make towards our strategic goals.”

During 2015, Cera said the board met over the course of several months and talked about what was the best strategy and course of action to achieve their strategic objectives.

“We certainly could have continued to operate on our own without this transaction,” Cera said. “Our organization and the Nicolet organization would be just fine on a standalone basis if we decided to chart our own individual courses. However, it’s been our decision and our choice to put two banks together and then create something that’s very special and very different. In coming together we both pick our partner who we believe gives us the best chance to succeed long-term to create shareholder value. This transaction simply provides an opportunity to complete our strategic plan, close the book on what we set out to accomplish and create the next chapter.”

Cera, who will serve with Atwell as co-chair of the combined banks, fielded one question from a shareholder who asked what the merged banks’ dividend policy will be.

“If you look historically on the perspective of Nicolet, they began their bank in 2000. They’re 16 years old and they have not paid a dividend to date,” he said. “We have been around for 140 years and for most of that most recent past, other than a short blip in 2007…we always paid a dividend. We have talked about this topic at length. We have agreed as a management team and as a board we will come together post-transaction to discuss the best use of capital strategy that the combined board feels is in the best interest of the company.”

Baylake shareholders will receive 0.4517 shares of Nicolet stock per share of Baylake stock, per terms of the merger. On April 1, Baylake announced a special dividend of $0.40 per share of stock payable on April 25 to shareholders of record on April 18.

Nicolet will close a branch in De Pere as a result of the merger while Baylake’s downtown Green Bay branch will close.