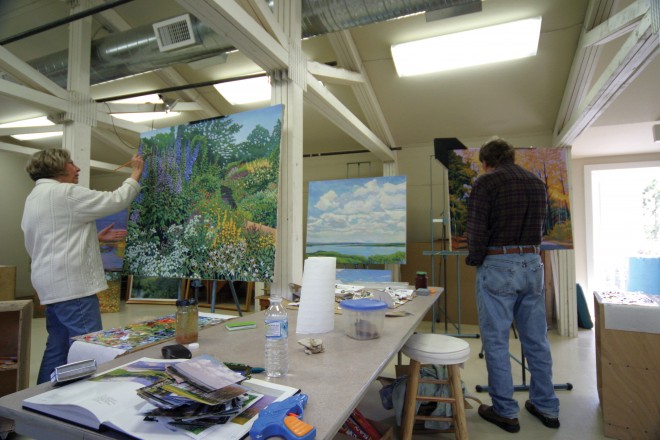 The Ekholms made the Peninsula School of Art their temporary workspace during the construction of their new studio on Little Spring Road in Fish Creek.

You might think two artists living under one roof would get to be a bit crowded sometimes, especially when both are using the same medium to express themselves. However, for Bob and Judi Ekholm their painting is just as enmeshed as their 25-year marriage. They work side-by-side focusing on the canvases in front of them, continuously inspiring one another.

You also might think that there’d be a sense of competition. Not so. According to Judi, the only tension arises from color. “We steal each other’s paint every once in a while. I’ll look over to see a color that Bob is working with and say ‘I’ve got to have that!’ It’s very handy.” Bob agrees that paint theft does occur, but it is balanced by the collaborative efforts of the two of them working together. Their use of color is a quality in their work that they are both well-known for, that and their magnificent landscapes.

“The element that ties everything together for us is color,” says Judi. Even earlier on when Judi was working toward her Masters of Arts in Teaching (MAT) at Indiana University, she was especially intrigued by texture and color. Her mentor was the internationally acclaimed painter William Bailey, currently Professor Emeritus at Yale University, who taught at IU when Judi was a student there. Bob’s mentor was also from Yale, the late well-known abstract artist Josef Albers. Bob attended Yale on a John Hay Fellowship later earning his MFA at UW-Madison.

Bob and Judi met long after their studies while both were teaching in Neenah. Bob, originally from Winnetka, IL, introduced Judi to Door County shortly after they started working together. Judi, a Louisville, KY native, took to Door County right away. It became another interest that they could share, along with their mutual interests in their children and their art. Two years after meeting they were married. They exhibited together at street shows and gallery shows in Chicago until they made Door County their permanent home fifteen years ago.

Since Door County landscapes make up about 75 percent of their work, it made sense to live here on a full-time basis. Part of their inspiration comes from taking drives in Bob’s 1953 Bentley (a car that once belonged to his father and is one of the biggest joys in Bob’s life) looking for new vistas. Bob explains, “Each time you drive around the peninsula, you get a new idea of what you would like to paint. It stays in the back of your mind until you are ready to sketch it out.” These trips through the back roads usually happen on Tuesdays. The other six days of the week are spent painting in their studio.

What they see on trips outside of the county appears in Bob and Judi’s paintings as well. Time spent in Florida and Napa Valley gives them a whole other host of ideas for expression. Like many artists, it is impossible for them to see a gorgeous scene and not want to commit it to canvas. The mind’s eye never turns off which may mean more hours working at the easel, but that’s where they prefer to be. “It is work,” admits Bob, “but it’s not like other people’s work. I can’t imagine retiring from painting and living life at a totally leisurely pace. Judi feels the same way. Ten days of vacation is about all we can do at one time; after that, we are anxious to get back to our studio.”

The Ekholms, who’ve lived and worked in Sister Bay until recently, have now moved their studio to Fish Creek. “We loved living in Sister Bay, but we were ready for a change,” Judi reflects. Their new home with an attached studio is on Little Spring Road, which is closer to Peninsula Art School, the YMCA (where they can be found each morning on the treadmills) and the Edgewood Orchard Gallery, where their work is represented. Bob thinks that the new space will prove a better working environment. “It breathes new life into things. Designing the perfect workplace is really just an extension of our art.” They hired Tom Birmingham of Great Northern Construction to make their ideal layout a reality. “Tom helped us design our studio so that it acts as a light box for our paintings,” describes Bob.

While waiting for their new studio to be completed, they made the Peninsula Art School their temporary working space. Bob and Judi were very appreciative to have such an inspirational place to work. Judi raves, “It was a wonderful experience. Everyone was very friendly and accommodating and it enabled us to continue painting.”

The Ekholms’ new house and studio, finished this summer, has not inhibited their exhibit schedule. Their work is on display at Edgewood Orchard Galleries throughout the season, with a special show on display until July 19th. Anne Emerson of Edgewood Orchard said that she really enjoys having the Ekholms’ paintings in the gallery. “There is an energy to Bob and Judi’s work that reverberates in the gallery when we hang their paintings. They capture the essence of a place, the beauty, the soul.”

Over the years, the Ekholms have established quite a dedicated following of their work. They both are included in the Dane County Cultural Affairs Commission’s 2005 calendar and Bob’s painting “Summer on the Prairie” is on this year’s DCCAC annual art poster. Between the two of them, they have over 800 oil paintings in private and public collections throughout the country, including the Smithsonian. This year they were also honored to have their paintings reproduced on Vaughan Johnson’s wine bottles from South Africa. These special bottles can be found locally at Main Street Market in Egg Harbor and elsewhere throughout the country.

“There is a great deal of joy in having someone invest in our work when they really love it,” Judi remarks. “We have been very fortunate with the people who collect our paintings. A lot of them have become really good friends.” Many of these friends stop by their studio to see what’s new on the easel, catch up on news of the Ekholms’ four children and three grandchildren, and to see their spirited Soft Coated Wheaten Terrier, Willie.

Bob and Judi did at one point consider moving closer to their grandchildren; however, they admit to being too tied to the county. Thankfully, their families do enjoy visiting them here. “We can’t ever picture leaving,” says Judi. “We love that it’s a small town feel; we love all the different landscapes. Even at our new house we’ve just discovered new flowers that we had never seen before. The peninsula just keeps us going.”

Even with this year full of changes, Bob and Judi are still creating paintings to inspire the rest of us. They serenely take their viewers into a world full of beautiful landscapes, lush gardens, vivid colors and simpler pleasures.