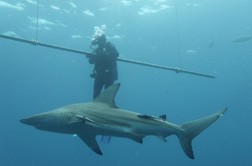 It was an overcast day, but the sea was deep blue. I had to pee again but getting in and out of my wetsuit was too formidable a challenge to make it worthwhile. Plus, there were sharks in there. I could see their fins above water as they flocked to the boat, where our dive master, Brian, was dumping some chum. Never mind that I was about to go diving with those very sharks.

We went with Umkomaas Lodge Dive Charters on recommendation and initially intended on doing two dives with them. Sharks thrive around the Aliwal Shoal and most people come to this area to dive with the impressive creatures. Umkomaas’ claim to fame? One of the only places in the world a person can legally shark dive without a cage.

When we arrived at the dive shop that morning, I had no intention of deliberately diving with sharks. I’m that girl who won’t go swimming in the ocean unless a bunch of other people are in the water. I always talk to the locals about whether or not sharks are an issue. I sometimes stand in the surf and envision a fin suddenly surfacing. It doesn’t help that I’ve watched Jaws once a year every year since I was 10.

The staff at Umkomaas strongly encouraged us to do the shark dive. They showed us pictures and video footage that looked incredible and terrifying.

“Because of the rain yesterday,” the receptionist said, “you’re going to have great visibility out there. If you’re even thinking about doing it – today’s the day.”

A British woman who booked five shark dives, one a day, sat with her wetsuit half-zipped, calmly reading a novel. Her first dive was yesterday, when they had, according to the receptionist, seen eight tiger sharks in addition to swarms of black-tip reef sharks. Even if we didn’t do the dive, we’d have to sit on the boat while she did, and so we caved and decided to take the plunge.

Since I started diving a couple years ago, some of my fear of fishes has receded. I still experience a momentary bout of panic when I first get in the water. Poor visibility makes me anxious. I feel a bit like an invader when I’m below the surface, and the scuba gear’s bulkiness makes me envy the graceful maneuvering of the fish. At the surface I can see the ocean’s vastness and distinctly feel how small a piece in the universal puzzle I am. The water churns and slops, sometimes huge waves carry me, bobbing like a buoy. 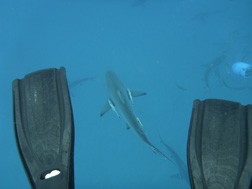 A reef shark passes beneath the flippers of Colin Frater.

The dive spot was one of those where they take you out to what seems like the middle of nowhere. Shark fins seemed to appear immediately. The staff of Umkomaas Lodge weren’t lying. Even without the sun, I could almost see straight down to the bottom of the ocean.

“Are you getting excited?” A British dive master-in-training asked me.

“Actually I’m getting terrified and wondering if this is a good idea. Do you think shark diving is brave, or stupid?”

“I guess we’ll know the answer to that in an hour from now, when you get back on the boat…”

I found that answer worrying. Later I would find out that the previous year during the annual Sardine Run (when billions of sardines spawn in the cool water of the Agulhas Bank and move north along the east coast of South Africa, the sheer numbers create a feeding frenzy that’s apparently incredible to witness) an American man lost his leg to a shark. Brian qualified that by saying the man was wearing split fins, so he looked more like a fish. It was, apparently, a Bull Shark, which are known to have more testosterone and not so much brainpower.

Fear mongering about sharks can create irrational behaviors, like shark nets on beaches. A shark net is like a placebo for the public. It makes them feel safe. In reality, sharks can find breaks or holes in the net and get in quite easily. They just can’t get back out again, and many die in the attempt. The nets don’t just claim the lives of sharks, but other marine life, like dolphins. The nets have been proven ineffective, yet the local government resists demands from fishermen, divers and environmentalists to take them out. They are afraid if the nets are pulled, the tourists will leave. Greater education on these issues could prevent attacks from sharks stuck inside the net, and help a species whose rapid decline could mean being placed on the endangered list quite soon.

So I appreciated that these guys weren’t keen on telling us horror stories but in retrospect, it was still somewhat disconcerting. 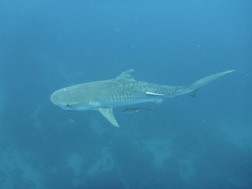 A tiger shark swims by. Photo by Colin Frater.

Brian gave us a safety briefing: “When you’re in the water, please stay upright, or vertical, to distinguish yourself from fish. Also, we’ve provided black gloves, so you aren’t flashing your fingers at them. The bar will stay at eight meters and we recommend you all hold onto the bar. It makes you look like more intimidating, and prevents you from accidentally going deeper, where you might be viewed as prey. Stay close to the group, you know what happens to stragglers. We get away with this because fish and sharks have been in the ocean for billions of years. Human beings have only been in the ocean for around a 100 years. They don’t view us as prey…yet. Give it another 100 years,” a crooked grin spreads across his face.

Then it was time to get in the water. I got my BCD on, my flippers, my mask. We all did a backward roll into the water on the count of three. Together we swam to the buoy, and descended along a line attached to the bar.

I cannot imagine what it would have been like if the water were murky. There were blacktip reef sharks everywhere. Scores of them, swimming around us like a whirlpool. Blacktips, though a smaller shark, are still formidable, the biggest of them reaching 1.6 meters (or 5’2” – that’s as long as I am tall). The three of us clung to the bar and watched as Brian rattled the bait bucket and bits of fish littered the water. There was another group of divers, perhaps ten of them, all scattered about. Many people had huge underwater cameras.

At various times, the blacktips were no more than an arm’s length away. I was able to recognize a few of them the second time they passed by their ragged fins, or the huge remora (attaches itself to sharks for protection, transport, and food bits) that clung to them. Within a couple minutes we spotted our first tiger shark, lurking much farther down. Tiger sharks dwarf the blacktip, many of them reaching over 5m (16 feet). So named for the tiger-like stripes on the side of their body, this massive creature slowly maneuvered to the bait bucket and attempted to brake it open, something like a dog with a Kong toy filled with peanut butter.

A couple of the divers from the other team, apparently experienced shark handlers, were interacting with the tiger sharks. A woman was attempting to put one of the tigers into a “tonic” state – or a natural paralysis – where after the handler can maneuver the shark for up to 15 minutes. The technique includes rubbing the pores around the animal’s nose and mouth, which she was doing without success. It was a good thing, I thought, that the tiger was so focused on the bait bucket.

So memorized by the scene in front, I failed to notice a blacktip shark gliding directly beneath me. He also failed to notice me above, and came so close that his dorsal fin touched my flipper. Startled, I jerked my foot up while my heart pounded in my ears. Equally shocked, the blacktip looked back at me indignantly.

After 80 minutes underwater, I was sharked-out and ready to get back in the boat. We were all quiet on the ride back to shore, processing what had taken place beneath the surface of the churning ocean. I put a mental “check” next to shark diving on my bucket list. I absolutely cannot imagine doing it five times in a row, or every day, as a dive master does, though it definitely taught me something about what I’m capable of. Next time I’m watching “Shark Week” on the Discovery Channel I’ll remember my face-face, fin-to-fin interaction with those impressive deep-sea dwellers and grin.