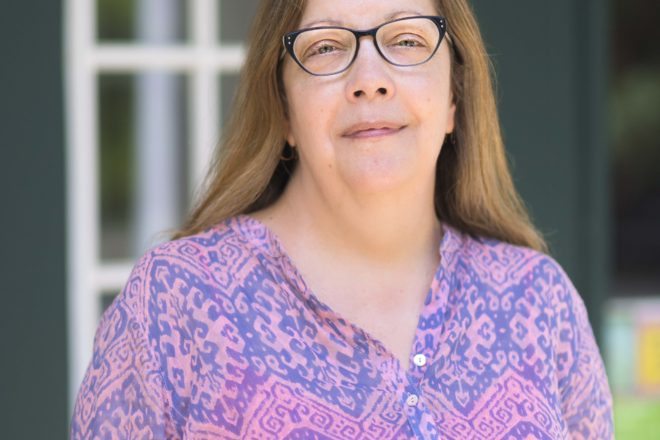 As noted by that great 19th century standup comedian Johannes Brahms, “A symphony is no joke.”

Nor is the job of producing symphonic orchestras a joke. In June 1992, the American Symphony Orchestra League released a report titled The Financial Condition of Symphony Orchestras, which came to the conclusion that symphony orchestras were in dire financial condition.

Certainly Sharon Grutzmacher must have seen that report, which came out during her second year as executive director of the Peninsula Music Festival (PMF), but she, music director Victor Yampolsky, personnel manager David Elliott and a host of sympatico musicians were too busy building PMF from a chamber music series to a symphonic series, which was made possible with the 1991 opening of the Door Community Auditorium.

Twenty-seven years later, Grutzmacher feels as though her part of the mission has been accomplished, and once the 66th season of the festival ends and the organization’s fiscal year closes in September, Grutzmacher decided it is time to begin the next phase of her life.

“I’m ready to move on and do something different now,” she said. “I’ve been in nonprofit arts management since I was 19 years old. It’s time to do something new. Our kids are grown up and gone. Our daughter got married in June. We have a big house. It’s a lot to take care of. We thought, well, this might be the time to make a change.”

She and her husband, Roger Bergen, have decided to move to Cedar Rapids, Iowa, to be closer to their children.

“Everybody wants to come to Door County. Some people find it weird that we want to leave, but we’re ready,” she said. “I’ll be here through the middle of September, and then make a nice, clean break of it. As I said to my board president, you can make this a gloom and doom thing, or see this as a real positive thing. Get some new blood in here with new ideas that might be good for the organization.”

She can say that with confidence, knowing she leaves PMF with a solid team in place to carry on.

“A real good indication of the organization is that people stay,” she said. “Victor’s been here 33 years. Our personnel manager [David Elliott] has been in the position for 39 years. We’ve got a bunch of orchestra members with 25 or more years. It gets in your blood.”

“I have nothing but accolades about Sharon. She’s a very strong-willed character,” Yampolsky said. “Sharon’s departure right now is a fundamental loss to this organization, which I can only compare to a black hole in the universe, which eats planets and stars every day.”

The thought of the black hole caused raucous laughter from Yampolsky before he returned to praising the departing executive director.

“To be there all the time with sound mind and raise a family and to deal with a very opinionated and capricious music director, it wasn’t always a bowl of cherries, you know,” he said. “It did take a long time for us to really polish all the corners, all the angles, in our relationship. It probably took 10 years. And then another 17 years with a mostly glorious relationship and accomplishments.”

Yampolsky said the relationship he and Grutzmacher developed by working together for nearly three decades was “more significant than just two colleagues who go to work Monday through Friday and check the clock.”

“We’re connected not just through producing shows but building this organization, literally from the ground up,” he said. “When Sharon arrived we did not have an executive director. There was one lady, Ann Hodges, who was part-time. Before that it was much, much smaller. The scope of our repertoire was much more limited to chamber orchestra or chamber ensemble. With the building of Door Community Auditorium [in 1991], a magnificent concert hall, all of it changed.

“Sharon was instrumental not only in maintaining this organization, but building it,” he continued. “In both of our lives the PMF Music Festival was on the top of our agenda and we did it together, with great help from David Elliott, who helped me so much with attracting outstanding wind and brass players, while I was concentrated on bringing outstanding string players.”

David Elliott was involved with PMF before Grutzmacher was hired, and has vivid memories of how the professionalism of the organization notched up with her hire. He recalls that before her arrival, festival records were kept in a shoebox beneath Ann Hodges’ couch.

“Sharon is by far the first one who came in who was truly professional and turned this thing into something run in the proper way with all the bells and whistles you’re supposed to have in an operation like this,” Elliott said. “First of all, she had training in the music business. She knew all the stuff to do regarding endowments, programming, marketing, you name it. She really turned the place around. No one’s irreplaceable, but it’s going to be a really hard act to follow. She has the dual knowledge of the orchestra business inside and out, but she also knows Door County. I’m not sure if we’ll be able to come up with someone who has both those connections.”

As chair of the PMF Players Committee, bassoonist Michael Kroth has worked closely with Grutzmacher on issues or problems that arise with the musicians.

“All the musicians here know she has worked hard on our behalf,” he said, mentioning in particular a bill she got rolling and signed into law in 2014 that increased the cap for the non-resident entertainer tax that, she told the Pulse at the time, “dinged 80 percent of my orchestra.”

“That was a terrific effort that was directly for the benefit of the musicians,” Kroth said. “I think that is one of the hallmarks of a great executive director, walking that fine line between the musicians and the board. I think she has done that well. She has always been very clear about the fact that she is a supporter of the musicians and board, and she has that difficult job of making both of those entities work.”

Kroth believes the transition between Sharon’s departure and hiring a replacement will be smooth.

“You’ve got a terrific board and a lot of folks invested in the success of this organization,” he said. “I get the sense this is a well-oiled machine and it’s going to carry on through this transition.”