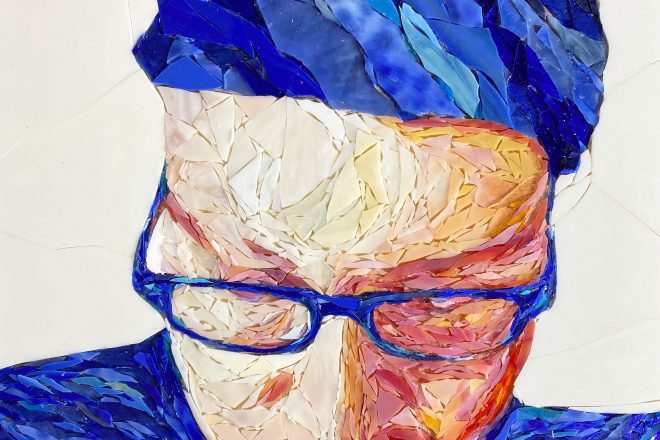 Kaftan’s self portrait was the beginning of his journey into portrait making.

“The Patron Saint of Coffee” oversees the comings and goings of customers all day long from an inside wall of the Coffee Lab in Ephraim. The glass mosaic – a portrait of Coffee Lab owner Randy Isley – was produced by artist Joseph Kaftan.

Kaftan has been making glass-mosaic images out of tiny pieces of colored glass – landscapes and waterscapes, fish and birds – in earnest since 2011. He went full time in 2014, and in 2019, he decided to try his hand at creating a portrait using a picture of himself that he had manipulated in Photoshop.

Some friends saw it and immediately asked whether Kaftan could make a portrait of Isley.

“Because it was a commission from friends, I really wanted [to imbue] a sense of humor to it,” he said. “So we made him deadly serious.” After putting coffee beans and coffee flowers in Isley’s hair, juxtaposed against the seriousness of the subject’s demeanor, “The Patron Saint of Coffee” was born.

Kaftan hoped the two portraits would lead to further commissions, and they have – three so far. Those portraits now hang at Bearded Heart and Edgewood Orchard Galleries.

He begins his mosaics with a watercolor sketch, so the painted background blends in anywhere it shows through between pieces of glass. Then he goes to his stacks of glass. When he’s working on a specific feature – a pair of lips, for instance – he chooses a lot of reds, pinks and oranges.

“It’s not just about the color,” Kaftan said. “It’s about the value. Every piece of glass placed down changes the second you place something next to it, so you have to feel your way through it.”

What looks blue, green or yellow inside a plastic container, for instance, can shift dramatically once it’s on the substrate because the individual pieces are so affected by what’s sitting right next to them.

But, unlike an oil painter, he doesn’t have an infinite range of colors.

“Based on how the stained glass was made, there can be different variations of colors, but there’s only going to be so many blues,” Kaftan said. “Purples and pinks are particularly hard to make in glass.”

Despite the limitations, he tries to do something a little different with each piece. Although his early works – especially those with animal subjects – ranged in complexity, portraits are so much more detailed than a bee or a chicken that he estimates it takes 20 times as long to produce a portrait.

“With a portrait of a specific person, you are going to get all these different visual cues to express that person,” Kaftan said. “It took me to the furthest point of my creative discomfort zone – to my creative edge.”

Furthermore, mosaics often don’t look like anything – until they do. Kaftan lays down his initial sketch, then picks a spot to begin placing glass, which is often a key feature such as a mouth or an eye.

“And then you have 5% of it done, and 10%, and you still don’t have a lot of expectations at that point,” Kaftan said. “But then you get 50% of it done, and you think to yourself, ‘How am I doing?’ And it still just looks like mud. It looks so confused. It doesn’t look like a person. And you get the glasses in; you get the beard in, and it’s still not right. And you think, ‘Here I have taken three weeks to do this one mosaic, and it’s a failure.’

“But then you get to this point – maybe 85% completion – and all of a sudden, it dials in – it clicks – and something in the brain recognizes it, and it looks like a person.”

And that makes the whole process worthwhile.

The first portraits were so compelling – and ultimately so much fun – that Kaftan just couldn’t stop. Now he’s completed 16.

But when business ramped back up this year and he was getting calls for more mosaics, he had to put a hold on making portraits and get back to landscapes, waterscapes and animals. When he receives queries about commissioned portraits, though, it’s certainly a line he’s happy to pursue.