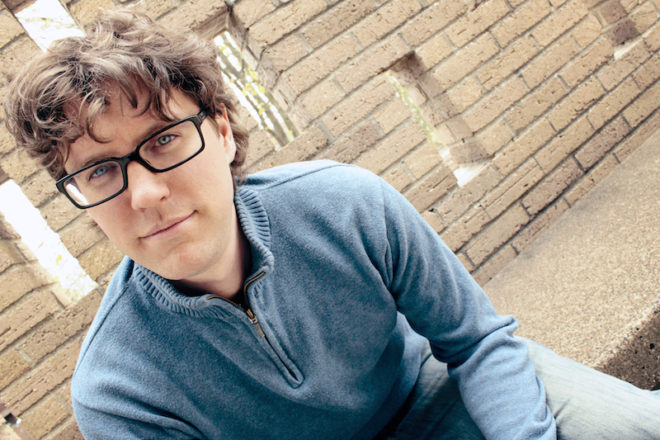 Every theater production is a machine with dozens of moving parts. To stage-manage is to ensure that those parts are moving efficiently, and more importantly, that they’re all working together smoothly. It’s easy to think of a stage manager as a taskmaster who rigidly organizes every last detail of a show, then works to make sure those details are executed identically each night.

Shawn Galligan knows this isn’t always the case, and in fact, a bit of flexibility goes a long way – especially when working outdoors, where new variables, such as the sun’s position in the sky, are introduced every night.

Galligan began his theater journey onstage doing community theater in middle school. His interest in performing grew throughout high school, and when he enrolled at Point Park University in Pittsburgh, he pursued a degree in musical-theater performance.

“It was a weird experience. I got a BFA in musical theater,” Galligan said, but “I was never in a musical.” That program did give him opportunities, however, both on stage and off. In addition to his performance classes, he worked in the scene shop, took directing classes, directed one-acts and did assistant stage-managing.

After performing for a decade in Ohio and Chicago, he realized he wasn’t getting the amount of work he wanted, so he shifted his focus to technical theater in 2011. Soon after, Galligan found himself stage-managing at the Actors Summit Theater in Akron, Ohio. He was familiar with the theater from when he had played Ernie in a production of Guys on Ice, and when colleagues began encouraging him to join the union, he remembered learning about Northern Sky Theater during that production.

Galligan applied for an assistant stage manager position and ended up taking an extended internship. He knew very little about Door County, but after being asked back to Northern Sky year after year, he’s moved here full time.

Working at Northern Sky affords Galligan a degree of flexibility in his role.

“It’s a hard job to explain,” he said. “I see myself as a facilitator. I keep everyone talking to each other so no one is caught by a nasty surprise.”

Recently, however, things have become more fluid, so Galligan might call the show – give the cues from the booth – a few nights a week, which is something the stage manager normally does.

The fluidity that’s involved in taking on multiple roles is something that comes easier to Galligan courtesy of his onstage experience. Because he knows what the actors are doing, he’s able to talk to them more effectively. Fluidity helps him talk to the designers, too.

“I’ve shifted my mentality over the last few years toward being more of a participant with the designers,” Galligan said. Working outdoors means dealing with the sun, and when the sunset changes every night, he may have to shift his cues to compensate.

“Rather than asking what a designer wants me to do, I ask what the intention is,” Galligan said. “Actors change as they discover, too, so an actor who would move at the beginning of a sentence might find his motivation later on, and the cue might change as the show evolves and grows.”

Being a stage manager means wearing many hats, but if Galligan had to describe it, he’d say it’s like being a mother.

“You have to dole out the discipline,” he said, “but you’re also the comforting shoulder and the listening ear.”