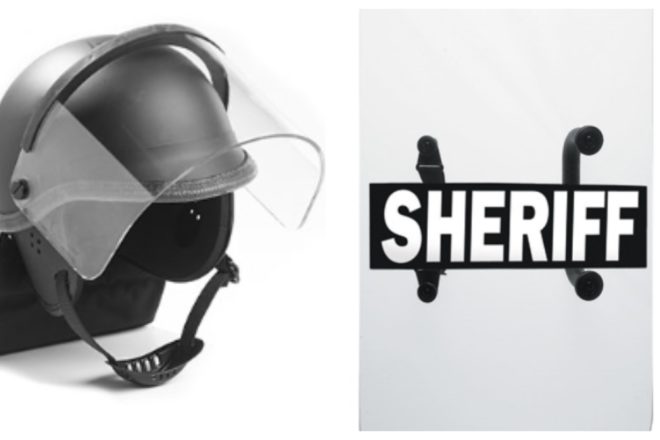 This is the model of helmet and shield that the Door County sheriff submitted last month for consideration for local purchase at a cost of just under $10,000 for 34 deputies. The finance committee denied the request. This month, a $10,000 donation for the purchase of the equipment came from Adopt a Soldier of Door County. Photo submitted by the Door County Sheriff’s Office.

Door County Sheriff Tammy Sternard received approval from the Door County Public Safety Committee to buy 34 sets of protective helmets and body shields for individuals within her department at a cost of $9,995.32.

Sternard said the equipment is “basic minimum protection” for the deputies should they ever need it, whether in Door County or for mutual-aid assistance in other communities. The request will now head to the Finance Committee for action during a meeting June 15, 2 p.m.

Door County District 21 Supervisor Joel Gunnlaugsson, who chairs the Public Safety Committee, said the request made sense to him, so he voted in favor of it.

“If our sheriff thinks it’s something she needs, we have to have faith in her as our sheriff,” he said.

Sternard, who took office in January 2019 after 27 years with the department, said she didn’t know they didn’t have protective equipment until last Friday, when the Emergency Police Services Program – which coordinates mutual aid across the state – requested assistance in both Brown County and the City of Madison.

“When I asked what we had, that’s when I found we don’t even have the basic minimum stuff to keep our officers safe,” Sternard said.

“As the leader of the organization, I don’t feel comfortable not having that basic minimum protection.”

The helmets protect the head, the shields the body, and “also, if we’re in a crowd of people and something occurs, those shields can be used to keep people away from what’s going on,” Sternard said.

Sternard’s request comes at a time when the country has erupted with protests, both peaceful and nonpeaceful, following the death of George Floyd, a 46-year-old black man who was killed after Minneapolis police officer Derek Chauvin knelt on his neck for almost nine minutes. Some of the nonpeaceful protests have been captured showing police officers aggressively using shields against the protestors.

“My intent is not to use that [shields] as force against people,” said Sternard, who praised the organizers of the peaceful protests that have taken place in Door County. “This is more of a protective, defense versus offense.”

District 19 Supervisor Bob Bultman cast one of the two dissenting votes at the Public Safety Committee meeting. He said the committee didn’t have time to consider the request in advance. It was listed on the agenda as “request to purchase personal protective equipment,” a term that, during the COVID-19 pandemic, has grown to mean items such as gloves and masks. In addition, the supporting documentation that explained the request was passed out the day of the meeting.

“I don’t like being blindsided, and I felt very uncomfortable making a decision like this – with all of its weight implications to our community – in just a few minutes,” Bultman said.

He said he could have supported the helmets with face shields, but not the body shields. He also said that local need is what should drive the purchase of “34 sets of riot gear” – not needs for assistance in other communities.

“I feel it’s better to keep our people on our own turf and out of harm’s way,” he said.

Sternard said when she learned last Friday that her department didn’t have any protective gear, she worked with Door County Administrator Ken Pabich to include the purchase request on the committee’s Monday agenda.

“There was no secrecy or purposeful intent, and the committee could have postponed it into the following month,” she said.

As for the term used to describe the purchase, she said, “We probably should have called it something else,” other than personal protective equipment. “We’ll try to get a different definition of it.”

Door County District 4 Supervisor Kara Counard, who cast the only other dissenting vote during the committee meeting, said she believed “the function of policing has gotten out of hand” and wanted to refocus the county’s resources with her “no” vote on expenditures such as mental health, social workers and community-based services, “instead of a $10,000 increase for escalating tactics.

Counard encouraged her Facebook followers to engage with Finance Committee members during the June 15 meeting.

“If there is a time for public comment, I think that having people call in to speak on the militarization of the police would be a good thing,” Counard posted on her page. “These are American citizens that the riot gear would potentially be used on.”