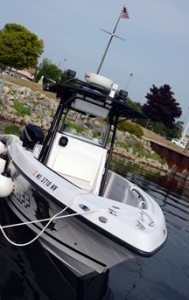 Expect to see the Door County Sheriff’s Department making a big splash on the lake this summer. The department recently acquired a new 500-horsepower Donzi police boat that comes equipped with the technology needed to fight maritime crime.

The boat was purchased using a $180,000 Homeland Security grant, which also covered the cost of training officers to operate it. Lt. Jeff Farley says that seven officers have been specially trained by DNR Warden Mike Neal to run the new boat, and that the department is very happy to have it.

“We’ve definitely needed something like this over the years,” says Farley. “How many miles of shoreline do we have? And we were never able to get out on the water.”

The Sheriff’s Department is responsible for most criminal investigations and all recovery efforts out on the water. And while the department has had a boat in the past, Sheriff Terry Vogel says that it simply did not have the capabilities of this new boat, which is packed with radar, GPS, and underwater and thermal imaging cameras.

The boat hit the water at the end of June, and Lt. Farley says that there has been no shortage of calls to respond to.

“Most of the calls have been boats under 14 feet,” says Farley. “It’s been a lot of kayak rescues. People need to realize and respect that this is a big body of water.”

The boat travels the peninsula via truck trailer, responding to calls and making regular patrols. But Sheriff Vogel recognizes that the department can’t be everywhere, which is why he’s glad that the DNR, the Coast Guard, and local fire departments have taken up part of the burden of responding on the water.

The Jacksonport Fire Department approved the purchase of a new water rescue boat in March, and the Baileys Harbor Fire Department purchased the old Coast Guard boat that the Sheriff’s Department had been using late last fall.

That boat is now docked at the Baileys Harbor Marina. Fire Chief Brian Zak says that, last year, the department had about nine calls on the water, but no boat to respond with.

“It cuts down on rescue and response time,” says Zak, speaking of having a boat anchored in Baileys Harbor. “Now we don’t have to wait and have the Coast Guard come all the way out here.”

When you combine all of these new boats with the boats that have already been stationed in places like Fish Creek, Washington Island, and Sturgeon Bay, says Vogel, the county’s in pretty good shape as far as marine safety.

“We’re doing much better now than we were with marine issues,” he says. “It’s nice to have boats scattered around the peninsula.”