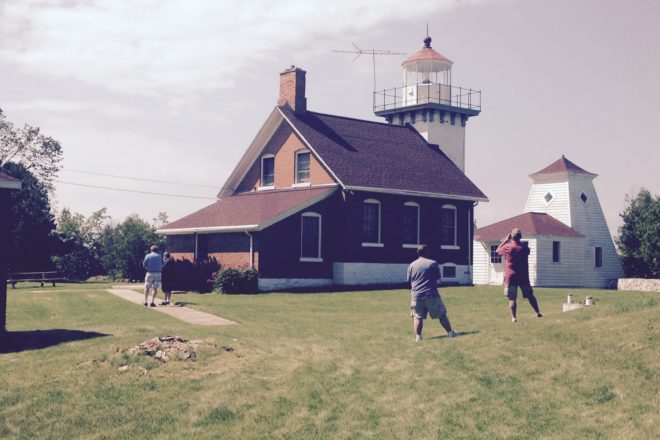 The Sherwood Point Lighthouse in Sturgeon Bay is the only lighthouse in Door County constructed with red brick.

Known for its uncharacteristic red brick and for its double distinction of being both the last Door County lighthouse to be automated and the last manned lighthouse on the Great Lakes, Sherwood Point Lighthouse is perched at the end of a serene country road, near Sturgeon Bay’s Idlewild area. The story of Sherwood Point is intricately connected to Sturgeon Bay’s nautical history, seeing as the construction of this landmark had much to do with the construction of the Sturgeon Bay Ship Canal.

Like most of the areas around the Great Lakes, Sturgeon Bay was prosperous initially due to the logging of its surrounding forests. However, prosperity was short lived due to extensive clear-cutting, and Sturgeon Bay eventually saw shipbuilding replace logging as the cornerstone of its economy.

Sturgeon Bay was a popular warm weather port, but it wasn’t able to have a long port season like Jacksonport or Baileys Harbor. Green Bay iced over in the winter, in contrast to the Lake Michigan waters, which were almost always free of ice. It wasn’t long before business interests came together and conceived the idea of excavating a canal between the waters of Lake Michigan and Sturgeon Bay to shorten the route and expand Sturgeon Bay as a port. The Sturgeon Bay and Lake Michigan Ship Canal and Harbor Company was formed, and work on the canal began in 1872.

By 1879, it became obvious that the ship canal was going to greatly increase the amount of nautical traffic. 1879 saw 160 vessels totaling 32,071 tons entering Sturgeon Bay. By 1882, that number increased to 3,050 vessels and 493,781 tons. Even before that significant jump, the company had already felt the need for a navigational aid to guide vessels into the western end of the waterway. At the time, the only light in the vicinity was at Green Island, which was 14 miles to the north. In March 1881, Congress appropriated $12,000 for the construction of a lighthouse to assist mariners entering Sturgeon Bay, and nine months later the Lighthouse Board selected a site at Sherwood Point for the new lighthouse. 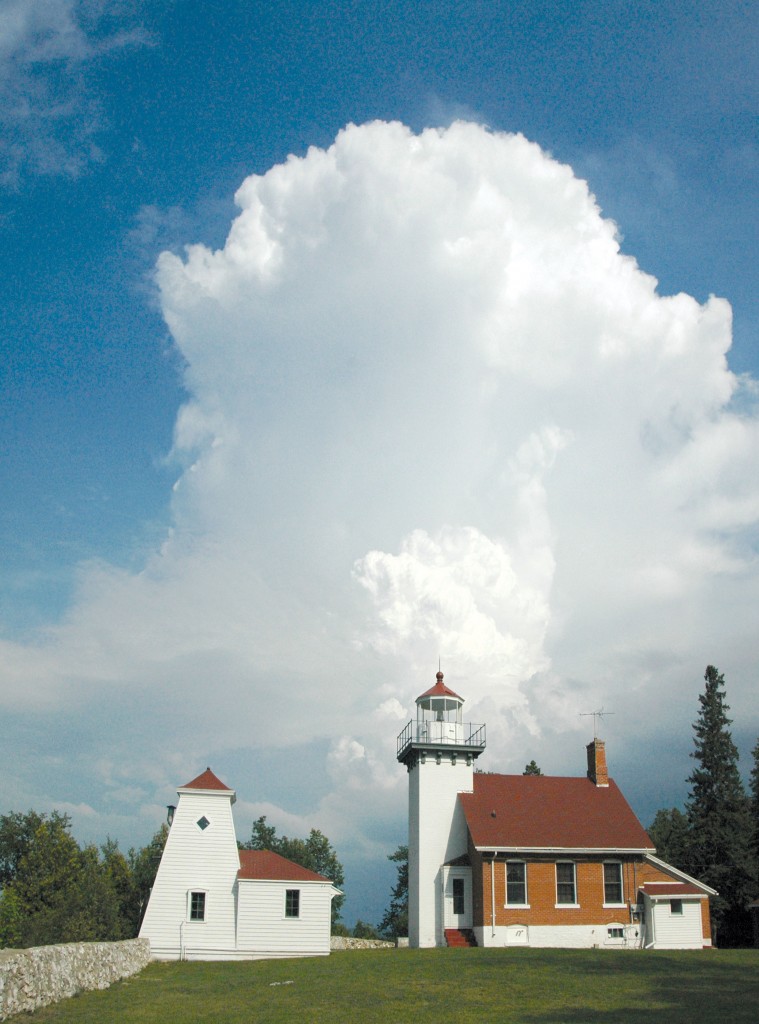 The Sherwood Point Lighthouse in Sturgeon Bay, one of 11 lighthouses in Door County. Photo by Dan Eggert.

It was the goal of the company to build the lighthouse during 1882, but construction was delayed because the company could not secure the site’s title. Peter Sherwood was the original owner of the point, but had passed away in 1867, leaving his wife Clarissa as his sole heir. The company was never able to find Mrs. Sherwood, and they eventually learned that she had sold the property (including the potential lighthouse site) to several different individuals. It was later found out that Elias Haines owned the site, but that a clear record of his title to the property didn’t exist. Finally, in July 1883, it was confirmed that Haines was indeed the owner of the lighthouse site, and the Sturgeon Bay & Lake Michigan Ship Canal and Harbor Company purchased the 1.1-acre site for $125.

Nonetheless, because the outcome of the investigation seemed apparent, the company was given the go-ahead to begin construction early, starting in May 1883. The vessel Warrington, dispatched from the Lighthouse Board Depot in Detroit, docked in Sturgeon Bay with the supplies for the lighthouse including red Detroit bricks. Sherwood Point is the only lighthouse in Door County that was constructed with red brick rather than the signature limestone brick native to the area. A crew of 20 men worked diligently to build the lighthouse, and after four and a half months of intensive labor, Sherwood Point Lighthouse was completed on September 28, 1883. Keeper Henry Stanley was transferred to the Sherwood Point lighthouse from Eagle Bluff and officially exhibited the light of the new lighthouse on October 10, 1883.

The light used was a Fourth Order Fresnel Lens, which had been manufactured in France. Invented by Augustine Fresnel in 1822, this radical system employed just one light source placed in the center of the lens. The new system more than doubled the distance at which light could be seen. Because of the lighthouse’s position at the top of a bluff, the lens sat at a focal point of 60 feet above lake level and had a visibility of 15 miles in clear weather.

As helpful as the lens was for the vessels coming into Sturgeon Bay, it was also very complicated in its operation. Stanley had come from Eagle Bluff, where the fixed white light of the lens had no moving parts and all Stanley had to do was make sure it stayed lit. Sherwood’s lens couldn’t have been more opposite – Steven Karges, author of Keepers of the Lights, writes, “The characteristic of the light was fixed white with an alternating red flash; a complex clock-work mechanism and revolving table in the lantern produced a fixed white light for 44 1/2 seconds, followed by a 5 1/2 second eclipse, then a 4 1/2 second red flash, and a 5 1/2 second eclipse before the cycle was repeated.” Because of its complicated nature, it wasn’t long before significant problems with the light developed. It would be something Stanley would struggle with throughout his 12 years at Sherwood Point.

In the summer of 1884, Stanley and his wife received a visit from a Miss Minnie Hesh, Mrs. 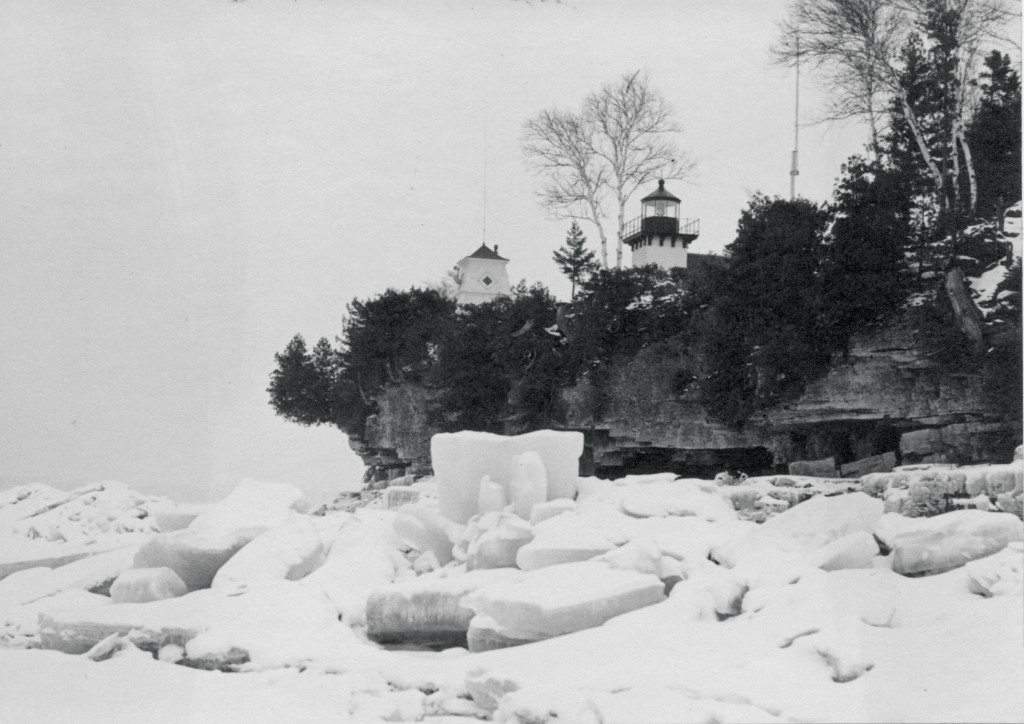 Sherwood Point Lighthouse from the bay, where ice shoves have washed to the shore. Photo courtesy of Door County Historical Museum.

Stanley’s niece, who arrived at Sherwood Point by way of Brooklyn, New York. Miss Hesh was invited to live at the lighthouse after her mother had passed away and quickly became helpful to her uncle, performing routine duties around the lighthouse station. She was particularly helpful when the lens’s clockwork mechanism finally broke down and had to be operated by hand. In 1889, Hesh married William Cochems, the son of Mathias Cochems, a successful and prominent Sturgeon Bay businessman. Minnie moved out of the lighthouse, but both she and William regularly visited Sherwood Point. After William went bankrupt as the result of a business deal, Henry hired him as his assistant at the lighthouse, and Minnie, William, and their family moved back to Sherwood Point in 1894. Cochems would later take over as lighthouse keeper when Henry Stanley passed away in 1895.

With the tenure of the new keeper and his young wife (who was also the assistant keeper), there should be no surprise that another new addition was made to Sherwood Point Lighthouse – a new lens. In March of 1898, the district lampist came to the lighthouse to install an up-to-date, ball-bearing apparatus consisting of an 1880 Fresnel lens formerly in use at another lighthouse, as well as a new pedestal, revolving table, clock, bearings, and service table. From that point on, the light operated without incident.

Minnie passed away in 1928, and William retired soon after in 1933. The Lighthouse Bureau then transferred Conrad Stram from the Sturgeon Bay Canal Light, where he had served for six years. Modern technology began to creep into Sherwood Point around this time, with the installation of electricity and running water. A radio tower and more advanced lightship with a fog system were built in 1935 and 1936, respectively, with Sherwood Point being the only station in the county to have a radio broadcasting facility. 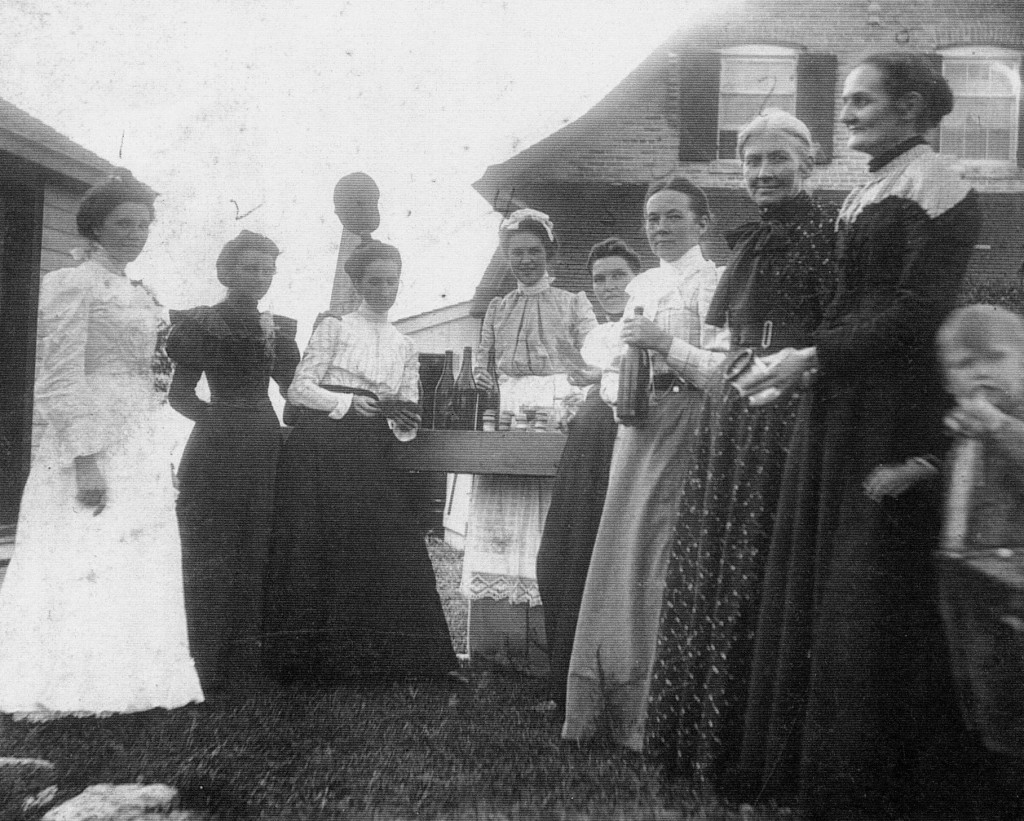 Today, the Sherwood Point Lighthouse and grounds are off-limits to the public, with the lighthouse quarters being utilized by the U.S. Coast Guard for rest and recreation. The grounds, the keeper’s house, and the fog house are open to the public during the Door County Maritime Museum’s Annual Lighthouse Walk, which will take place on June 13 and 14, 2009. As with all of the Door County lighthouses, Sherwood Point may no longer have a lighthouse keep, but the history and traditions established in this red brick building live on.