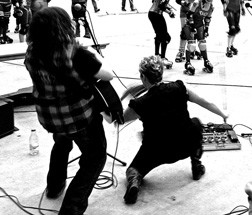 On June 6 at the Brick Lot Pub & Grill, SHESHE will perform with an opening from local musicians Joshua Gregory and Elliot Goettelman as The Bent Elbows.

Early in the spring of 2013, deep in the belly of Madison, Julia and Dana fulfilled their cosmic destiny to meet, and almost immediately, SHESHE happened. When you let two curly-haired chicks-with-riffs play with toys that make noise with a hard-yet-sweet sound.

Recognized as a finalist and two-time winner of Madison Area Music Awards for Best String Instrumentalist since 2009, Julia McConahay’s super sweet violin sounds have radiated throughout the music of Mark Croft, Madison Greene, Little Marsh Overflow, Compass Rose and Whiskey Doll. In addition to releasing a solo album in 2010, McConahay has also been featured on multiple award-winning albums and independent short-film soundtracks.

Meanwhile, somewhere on another planet covered in corn fields, Dana Perry was rockin’ any stage she stepped out on. After years of both professional and personal training in various musical fields, she brought her focus to the guitar and developed her own style. Combine that with poignant song lyrics and Earth-shaking powerhouse vocals and she’s quite a force.

Then outta nowhere, Shannon Callaway decided she was gonna give these chicks a much desired backbone by throwing down on drums. For more information visit rawartists.org/sheshe.

Other bands slated to play the Brick Lot in June are: The Mad Cats Band, June 20; and Elastik Waste Banned, June 27.