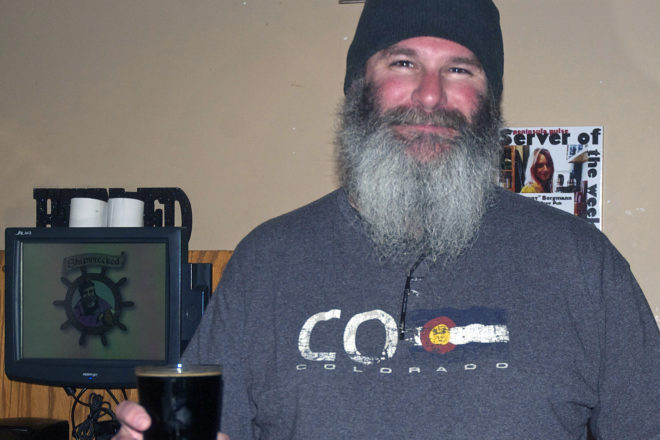 Shipwrecked Brewmaster Rich Zielke with a pint of what he calls Cascadian, a black IPA brewed with Door County spruce tips and Mosaic hops. It’s just one of the specialty beers he has brewed or plans to brew for the 20th anniversary of the brewpub and his 20th year as a craft brewer. Photo by Jim Lundstrom.

“I just wanted to do something big, something that would maybe test the limits of our system and make a significant event for this place. It’s an unusual lifespan for a brewpub nowadays,” he said. “Throughout the whole season I want to celebrate the longevity of this operation and the evolution of craft beer.”

“I’m all about the IPA,” he said. “That’s my generation. I feel that West Coast influence, coming from the West to the Midwest. I see a lot of over-the-top stuff. I go for balance.”

This is definitely not your typical imperial IPA. This is a big, flavorful, dark and balanced beer, a fitting tribute to the oldest craft brewhouse on the peninsula.

Shipwrecked will celebrate its 20th Anniversary on Saturday, May 6, with the release of 20 Year Storm Imperial IPA and classic rock and roll music with The Growlerz that night at 9.

“The Growlerz are a bunch of my friends who come up and we occupy the hotel for a fun weekend,” Rich said. “It started out as nothing. Now they think they’re rock stars because they’ve done it five years in a row.”

He mentions The Growlerz played to a full house last year. “It’s great it’s grown into something like that.”

Also on tap will be a couple of other great new beers, including one based on a recipe by Thomas Jefferson.

“I’ve been playing with spruce tips,” Rich said. “I thought, let’s give people what they’re experiencing in the outdoors here. Taste it in the glass.”

He used young local spruce tips and dry hopped the IPA with Mosaic hops. In order to keep the bitterness down, instead of using the traditional black patent malt for this black IPA, Rich used debittered black wheat.

The result is a black IPA that starts out with a tantalizing piney aroma and goes down smooth and velvety.

“We got label approval for our spruce tip ale. I think we might get that in bottles,” Rich said.

Then there’s the Shipwrecked IPA that he aged for a month in a rye barrel from sister business Door County Distillery. The aging gives the IPA a darker hue, and its taste profile is changed by both the rye and the oak barrel.

“There’s plenty there,” Rich said. “We did the Peninsula Porter in a bourbon barrel that went really well.”

He said in the past he would do special releases during the off-season and present the regular Shipwrecked lineup through the busy season, but now he wants these special releases to be enjoyed by larger audiences.

“The lineup on the bottled beers will stay the same, but on tap we’ll change it and be more responsive to what people are looking for,” Rich said. “We’ve done consistently well with the same lineup for a long time. I think it’s time to respond to the market and try some other things.”

The Cherry Wheat has been the consistent bestseller in the Shipwrecked lineup, and Rich doesn’t expect that to change. But he can also see a Cherry Wheat aged in a Door County Distillery Cherry Brandy barrel in a future lineup.

“It’s been a good run for me up here. Ten years. Hopefully we’ve moved things forward,” Rich said. “I think we’ve got something good going on. It’s just great to ride the wave.”