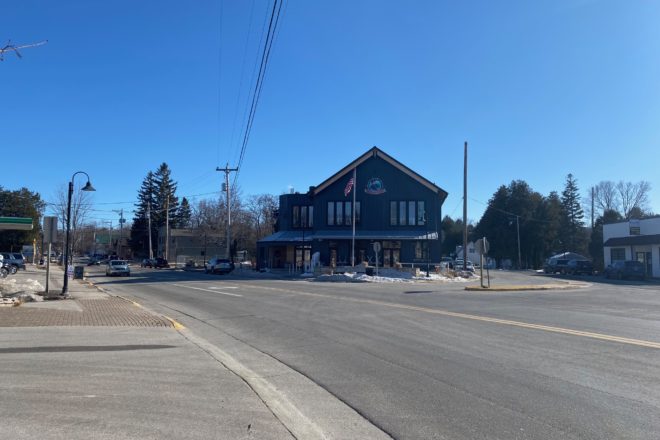 A contentious Egg Harbor Plan Commission meeting came to an end Wednesday night with the denial of a conditional use permit (CUP) for Shipwrecked Brew Pub.

Plan commissionwers Lou Nyberg and Kathy Navis clashed several times with commissioners Jon Kolb, Emily Pitchford and Cambria Mueller as they debated whether to approve a proposal to add 92 seats for an outdoor beer garden on the former Christine’s Casuals property next to Shipwrecked.

After three hours of deliberations, the commission voted 4-2 to deny the permit, with Mueller, Kolb, Pitchford and Paula Cashin voting to deny, and Navis and Nyberg in support of the proposal.

The commission cited a long list of reasons for the denial, but the primary reasons centered on the lack of parking in the proposal.

Shipwrecked has 11 parking spots for its existing 302 seats, but it is grandfathered in for that use because the restaurant has been in existence for almost as long as the village.

The proposal to combine the restaurant with the neighboring parcel and add a beer garden, however, triggers the process for a CUP. When that happens, the plan commission must evaluate it as an entirely new project, which negates the grandfather clause. That means Shipwrecked would now have to meet its full parking burden of 105 parking spaces.

The proposal aimed to meet that with 27 on-site spaces; 13 off-site, shared parking spaces at Fat Louie’s across the street; and six at its employee-housing complex at the south end of the village (formerly the Cape Cod Motel). The remaining 58 spaces required would be met by paying the village’s $50 per space Fee in Lieu of Parking (FILOP). The village has raised that fee to $250 per space, but the proposal from Shipwrecked was submitted under the previous $50 amount.

In making the motion to deny the permit, plan commission Chair Cambria Mueller cited the lack of parking and the unreasonable amount requested through the FILOP, the congestion and safety concerns of intensifying the use at the Highway 42 and County G intersection, and the inconsistencies with the village’s comprehensive master plan.

Navis and Nyberg argued vehemently in favor of the proposal. Navis, who operates the nearby Greens N Grains grocery store, said the additional seats wouldn’t make the parking problem in the village “any worse than it already is.”

Navis has previously argued that removing parking spaces in the downtown core would be “disastrous for the small businesses in the historic downtown,” but she said she is in favor of Shipwrecked’s proposal because it adds 16 parking spaces to what it has now.

“I am not in favor of having a downtown area that is a large, expansive parking lot,” she said. “I think downtown areas should be tighter, and people would be encouraged to walk through the downtown.”

Nyberg argued that the proposal was too far along to deny it and that the planners had addressed the impervious-surface issue. He said that if the additional seating and parking were issues, they should have been addressed from the beginning. Kolb reminded Nyberg that parking was discussed as a major problem during the first meeting about the proposal.

After the vote, Shipwrecked owner Bob Pollman joined the meeting via Zoom and expressed his frustration with the decision.

“I’d like to see any evidence to back up the safety issues,” Pollman said. “This is all BS created by you folks just to deny us. You have no backup at all, and I’d like to see this [evidence].”

The commissioners did not respond to Pollman’s comments.