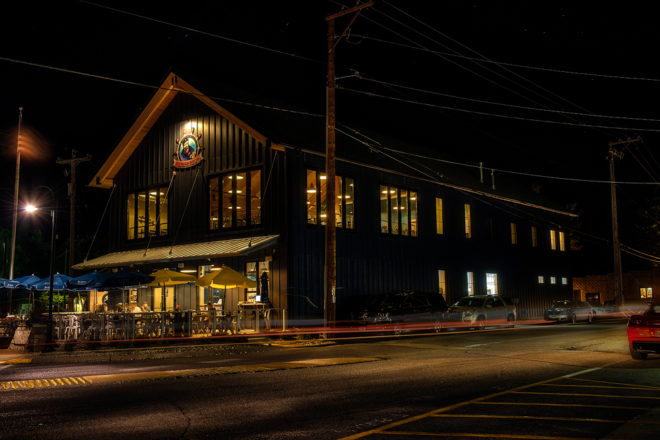 The Village of Egg Harbor Plan Commission on Tuesday voted to deny a Conditional Use Permit and Special Development District relief for the expansion of Shipwrecked Brew Pub during the second of two meetings to review the proposal.

The owners of Shipwrecked have proposed building an 1,865-square-foot addition and 92 additional seats in a beer garden next door to the existing restaurant on property that was long the home of Christine’s Casuals. Shipwrecked has nearly 300 seats on its existing property.

Cambria Mueller acted as the plan commission’s chair for the review. Joe Smith, the regular chair and a village trustee, recused himself from the commission to present the project for the owners of Shipwrecked, where he is the general manager. Mueller began the meeting with a statement saying that she believed the plan commission could not approve the project because it lacked a shared-use agreement with a neighboring property. The plans submitted for the project relied on an agreement with the owners of Signature Pieces for the shared use of their driveway to access parking. Robert Pollman Sr., the owner of the Shipwrecked property, confirmed that there was no such agreement during a public-comment session at the start of the meeting.

Robert Hawley, who owns the Signature Pieces property with his wife, Jennifer Blahnik, said as of last week’s meeting the Shipwrecked owners had not approached them about negotiating a shared use agreement. Pollman said during the meeting that an agreement was not realistic, so that driveway access and parking spaces would likely be removed from the plan.

“Without there being an agreement for a shared driveway, I don’t see how the commission can deliberate these facts today,” Mueller said. “For the plan commission to do our due diligence, we need the most up-to-date documents before us to be able to deliberate on those specific things.”

Her fellow commissioners agreed, voting to deny the application.

The denial means that Shipwrecked will have to go back to the drawing board to update its plans and resubmit them to the plan commission, starting the public hearing process over. Commissioner Kathy Navis suggested that the plan commission postpone, rather than deny the permits, as they did when changes were requested for the Village View condominium project across the street in 2019.

Mueller said there was a key difference between the projects.

“Using Village View as an example, the project and application were postponed, but there was not the need for an agreement between two parties,” Mueller said. “We were asking them to hone in design plans and comply with the zoning on their own property. Once [Shipwrecked’s owners] get the shared-use agreement in place, they bring it back to the plan commission and start over and start with a clean slate.”

Mueller then said she was “putting on my mother’s hat” for a moment and addressed Pollman and Smith.

“All it would have taken is a discussion prior to this with your neighbor, and we would be having a much different discussion today,” she said.

“It’s my understanding that we’re supposed to discuss what was presented in the application,” Smith said.

He asked the commission to base its decision on the current application with conditions for requested changes.

But commissioners Mueller, Jon Kolb, and Emily Pitchford each said that the lack of a shared-use agreement was such a large hole in the plan that the commission couldn’t reasonably create those conditions.

“We need to see what your plans are in front of us, not place conditions on a ‘what if’,” Mueller said.

“I always thought the conditional use was to look at the program, determine if it meets these [rules] and not these, and place conditions on this project,” Pollman said.

Mueller put her mother’s hat back on.

“The plan that they’re submitting, we have very solid grounds for denial,” he said. “We really don’t know what we’re approving. There is a duty on the applicant to show that the plan could be completed. That’s not the case here.”