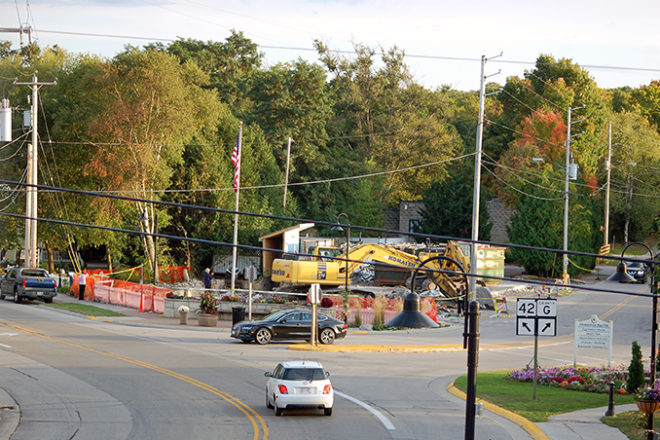 Brewmaster Rich Zielke stood on the island that separates County G lanes to Hwy 42 the morning of Sept. 27 as two Komatsu excavators began pulling down Shipwrecked Brew Pub, where he has been brewmaster since 2006.

Shipwrecked was heavily damaged by an electrical fire on Aug. 20. Fifteen fire departments battled the blaze with support from local EMTs and the Red Cross. The building was later determined to be a total loss.

The brewery equipment was largely unscathed by the fire, and Zielke is in the process of setting up the equipment at the Door County Distillery in Carlsville, which, like Shipwrecked, is owned by the Pollman family. While he will continue to brew at the distillery until Shipwrecked is rebuilt, he no longer has the pub to sell tap beer, so will bottle much of it.

Crews hope to have the entire building taken down and the site cleaned by Oct. 2, ahead of Egg Harbor’s Pumpkin Patch Festival as a courtesy to all neighboring businesses.

Shipwrecked Brew Pub was established in 1997 – making it the oldest extant craft brewery in the county – and celebrated its 20th anniversary a few months before the fire. Construction of the new building is expected to last into spring. Shipwrecked hopes to reopen sometime in summer 2018.

More information can be found at shipwreckedbrewpub.com, or by emailing [email protected]